An interesting game took place last night at The Carlsberg Stadium as Bedfordshire County League side Southill Alexander took on Ryman Division One (North) side Waltham Forest. The match was arranged as the Bishop's management team of Steve Foster and Laurence Revell are good friends with the Stag's coaching staff of Tony Mercer, Mel Ramsey and Tony Murphy.

Enfield Town fans will of course know that we face the East London side in the FA Cup in just a few weeks. It wasn't a full strength XI on show for the visitors but some familiar faces in Des Thomas and Danny Penfold were on show. This was The Stags third pre-season friendly in less 2 days with the 1st XI losing to ex manager Hakan Hayrettin's Thurrock 2-0 and a 2nd XI losing to Essex Senior League side Maritius Sports 2-1 just 24 hours previous on Tuesday night.

Despite the dry summer we've all been having (apart from the last few days I know) the Carlsberg Stadium pitch was in first-class condition and looking very green so top marks to the ground staff!!

Forest equalised soon after and were the better side going forward but allowed the home side to make it 2-1 when their keeper who had picked up an injury couldn't get to an in swinging corner allowing the Southill player to knock the ball into the net.

The Stags had no substitute keeper so Des Thomas took over and donned the keeper's jersey and gloves. 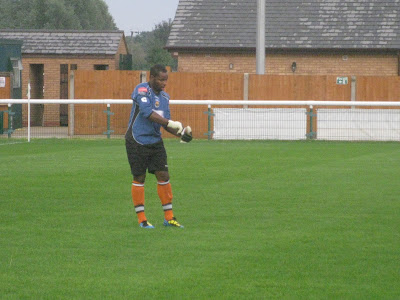 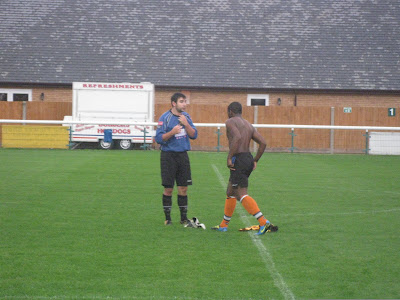 Above - Des Thomas takes over in goal

Forest came back at the home side and in the space of a few minutes hit the woodwork twice. The first shot deserved to be a goal when a cracking shot whizzed past the Southill keeper only to clatter the crossbar. Very unlucky on the Forest player's part.

Forest made it 2-2 just prior to the break.

The second half didn't have half as much goalmouth incident with Thomas looking comfortable when called upon to claim the ball or make a routine save.

The goal of the night sealed the win for Tony Mercer's side. A nice five man passing move created the opportunity for the Stag's player to confidently pass the ball into the corner of the net past the oncoming keeper. It could of been 2-4 late on when a header was put wide of the goal by an unmarked Stag's player at the far post from a left hand side cross.

Supporters will always say pre season form counts for nothing but on the basis of last night's match Enfield Town's Ryman league opponents look decent going forward so may well cause a few upsets along the way.

Steve Foster's Southill Alexander, who are an internet/supporter owned club, will compete in their second season in the Bedfordshire County League Premier Division. Looking at their results for last season - It was an indifferent start but their league form after Christmas improved significantly reading P 14 W 9 D 2 L 3 with 50 goals scored and 26 let in. The cold end believes Alexander will be up in the top section of the division for this forthcoming season.

To get involved you need to purchase shares in the club and then website membership. More details can be found at Southill Alexander's website