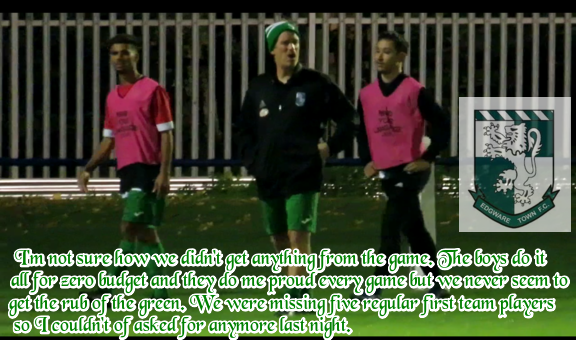 The Royals left it late to take all three points from their Spartan South Midlands League Premier Division game at home to Edgware Town last night.
Potton United have shown some good form since the start of the season with just one league defeat at home to Wembley in their six games played prior to kick off. They had also beaten Peterborough Northern Star and Thetford Town in the Emirates FA Cup before being beaten by Isthmian North side Grays Athletic. In the Buildbase FA Vase they had beaten local rival's Biggleswade United before a surprise defeat to Essex Senior League Clapton at home in the second qualifying round.
Edgware Town named Paul Marks and Adam Page in their starting XI who were making their first start of the season. It was Mark's first appearance for The Wares since April 2019 - It was great for the Edgware fans who had made the trip up the A1 seeing the former Enfield Town player back in the team. He has been playing in the Hertfordshire Senior County League for Premier Division side Belstone. Their player/manager Fergus Moore was on the bench at the ripe old age of 48 (he's 49 in February) - It's truly amazing to see him still willing to play - He started his career in the 1989 with Brentford - So far this season he hasn't got on the pitch but has been on the bench in eight games played. He tells me he's waiting for the boss to give him a chance.
One of the players missing was former football league player Scott McGleish who has made seven starts so far - He is only a youngster compared to Moore as he's only 46 years old.
The playing surface at The Hollow was immaculate - the people who work on the pitch can take a huge amount of credit for this - It was a great game to watch as a neutral fan.
Edgware were hard working throughout the game and were the better side in the first half. I was really impressed with their midfielder/attacker Haddi Issa who is small in stature but has a great touch and skill when on the ball. He also worked hard for the team tracking back and putting tackles in.

THE PENALTY INCIDENT - STILL IMAGE TAKEN FROM FOOTAGE
There was a controversial moment in the first half when Edgware Town's Daniel Pett appeared to be pushed/elbowed in the back by Potton's Luke Pyman in the box causing him to fall down - the vast majority of people on that have viewed this incident on social media have stated it was a certain penalty kick. In real time I thought it was and haven't changed my opinion. The referee was closer than me though and waved play on.
Edgware took the lead when Issa's overhead kick re-bounded off the cross bar for Page to stoop and head home to make it 0-1.
Potton who had had the ball in the net only for it to be ruled out correctly for offside were 0-1 down at the break and had their team talk on the pitch. Their manager Jimmy Martin wasn't at all happy with their performance stating they were 'poor' and lacked 'momentum and fluidity'.
Their squad and in particular former Biggleswade United player Aaron McCardle took his words on board and had a fantastic second half.
Former London Colney player Loren Maxwell, who came on a substitute at half time, levelled the score within a few minutes of the re-start netting from close range following a cross from the right hand side.
Ibrahim Nagheeb then capitalised on the home side playing the ball out from the back and slotted home to make it 1-2 on 57 minutes.
Potton piled on the pressure and were rewarded on 68 minutes when McCardle's deflected shot looped over Frazer Siddall in the Edgware goal.
The game looked to be heading to a draw which is what I thought Edgware deserved for their hard work all over the pitch.
Sadly for them in injury time Luke Pyman was brought down by Siddall and a spot kick was awarded to Potton United. McCardle scored to make it 3-2 to the delight of the noisy Potton fans behind the goal and their bench who celebrated exactly how a last minute winner should be celebrated.
The Royals have three very important games coming up - they host Colney Heath (currently in second place) at home on Saturday before a Wednesday night midweek local derby at Baldock Town followed by a huge game at Leighton Town on Saturday 31st October.
Edgware host Baldock Town on Saturday before another midweek long trip to Dunstable Town. They then have a trip to the south-coast to play Southern Combination Division One side Worthing United in the Buildbase FA Vase First Round. It would be great to see The Wares on a cup run - their best performance being in the 1991/92 season when they got to the Fifth Round losing to Guiseley who went on to reach the final. I wish them the very best of luck in the Vase game!
MATCH HIGHLIGHTS
SPARTAN SOUTH MIDLANDS LEAGUE MIDWEEK RESULTS
PREMIER DIVISION
Dunstable Town 1 Eynesbury Rovers 6 (89)
Harefield United 3 Harpenden Town 0 (55)
Leverstock Green 0 Biggleswade United 0 (49)
Newport Pagnell Town 2 Leighton Town 2 (179)
North Greenford United 1 Colney Heath 4 (81)
Oxhey Jets 2 Broadfields United 1 (53)
Potton United 3 Edgware Town 2 (73)
Tring Athletic 3 London Colney 1 (100)
Wembley 0 Aylesbury Vale Dynamos (46)
DIVISION ONE
New Salamis 2 Ampthill Town 2 (45) - Played Monday night
MK Irish 3 London Tigers 1 (55)
At the time of writing Baldock Town are due to play Crawley Green tonight in the Premier Division and Langford are scheduled to host Park View at Forde Park. However it's been raining heavily mostly all day so there maybe postponements due. 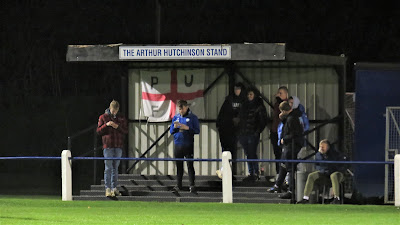 THE POTTON FANS BEHIND THE GOAL WERE VERY HAPPY AT THE END OF THE GAME
at 15:43