TOWN EDGE OUT TILBURY IN 4-3 VICTORY 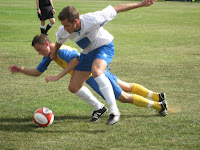 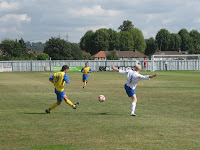 At times it wasn't pretty but Enfield Town managed (just) to edge past Tilbury today in what should of been an easier victory than it was. The towner's were unchanged from Tuesday (when was the last time that happened?, a nice change from last season) facing the Docker's who had the luxury of having Lee Hodges warming their bench. 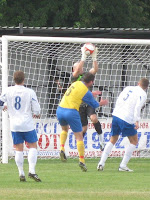 The Essex side started well and had the Town rattled when they hit the cross-bar from close range in the opening five minutes. For the first 10 minutes the game was played largely in midfield apart from this chance. Town did get the ball in the net but not after fouling Chopper in the docker's goal. It was somewhat against the run of play when Gunz on the right wing swung in a wonderful cross towards the goal which Stuart Blackburne got on the end of to head the ball into the net. 1-0 and things were looking good.

Town then got on top of Tilbury and about 10 minutes later Stuart was threw in a one on one with Chopper just inside the edge of the box. Chopper slid in and from what i saw won some of the ball and then took down Stuart. Somewhat harshly referee Chris O'Donnell blew up and pointed to the spot. Rudi Hall dispatched the resultant penalty to make it 2-0. BRILLIANT!!

Things got even better for Town who were now well on top of what had been a well organised Tilbury team for the first ten minutes. A fantastic 40 yard ball from midfield by Paul Marks went to Stuart on the right wing, he dribbled the ball into the box and crossed the ball which hit a Tilbury defender's hand (which was raised) inside the box. Another Penalty.

This penalty was placed in the net by rudi to chopper's left hand side after what appeared to be the referee blowing to say take the kick but he was still arguing with a Tilbury player and chopper was to the right of the goal bending down having a drink from his water bottle. The referee ordered a re-take and Chopper saved well to his right. 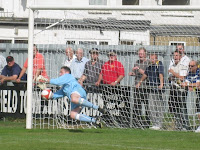 Town then made it 3-0 when Rudi's corner kick looked like it was going in at the near post anyway was touched in by Stuart who widely celebrated with a somersault. 3-0 and it wasn't even half-time yet. Tuesday's game versus Ilford was now well and truly put to bed and Town were cruising to 3 points. OR WHERE THEY??? 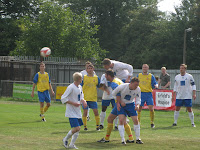 Tilbury were using the long throw tactic much the same as what Town do with Darryl Ellams and it was from a long throw they got back into the game, Chris Wild headed the ball clear but did climb on the back on the Tilbury player inside the box. Looking back it was soft penalty to give, It was one of those ones which you've seen given and not given. 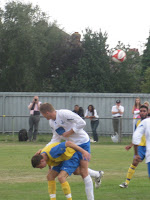 Another day it would of been play on. Joe Keith scored the spot-kick and made it 3-1. 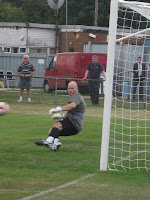 Still no need to worry as Town were playing well and 3-1 up.

Adam Wallace then had a turn and shot at the edge of the box well saved and soon after Tilbury's Ben Bradbury thought he had made it 3-2 when he headed the ball into the the Town net. The Assistant flagged for what was clearly offside. 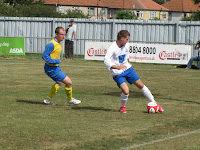 Town kicked off the second half and it all went horribly wrong for a little while. Tilbury brought on Lee Hodges and apart from a few stray passes you could tell he had played at a higher level. A defensive mix-up and Tilbury made it 3-2. Surprise, Surprise the whinging fan then appeared behind the goal - "come on" "do something" "now".... Did he not see the first half performance?? The Cold End has never seen him happy.

Stuart Blackburne then spoiled what had been a great performance for him. He went in for a tackle with Rickie Hayles and didn't play the ball and was booked, It looked a booking and he should of just run off and played on. Instead he sarcastically applauded the referee who immediately brandished a 2nd yellow and the red card. It was so silly and shouldn't of happened.

Tilbury took advantage of playing versus 10 men and made it 3-3 quickly after. 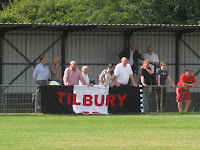 Lee Hodges showed some good touches and was now pulling the strings in midfield for Tilbury. Andy Jones in the Town midfield was having a shocker if the cold end is honest (other fans thought this too)...too many stray passes. A bad day at the office for Jonah!!

Steve and Dell then took Rudi and David Allen off and replaced them with Matt Thompson and Dave Blower.

Town looked like they were a man short and didn't threaten the Tilbury goal until Fabio who was playing brilliantly passed to Paul Marks who rolled the ball towards the Tilbury net..."it's going in!! It's in! YE"..........No!!! Christian Wheeler slid in and cleared the ball off the line just when it looked like it was in. So close.

Tilbury went forward looking for a winner and had a few shots on and off target and looked the more dangerous team. Lee Hodges put a free kick just wide of the left hand post.

Adam Wallace was replaced by Roberto Minnitti shortly afterwards and it was Town who took the points when Fabio through on goal passed the ball into the net to much celebration from the town fans, players and bench.

There were a few scares for Town fans in the closing minutes with Ben Bradbury's shot being well saved and a few more shots going wide. 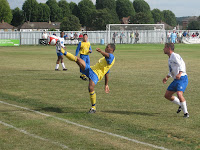 Rickie Hayles was very lucky to stay on the pitch when after a free kick was claimed by both Rob Blackburne's hands he launched an over the top challenge on town's keeper. Both player's stayed down injured and the referee gave a yellow card.

A good game with loads of incidents and a good result. Town looked good in the first half and parts of the second half. Andy Jones as mentioned didn't have the best of games in midfield and letting in 3 goals isn't the best but, Town won and that's all that matters.

From the first 3 games most Town supporters would of took 6 points and Town can now kick on and win at Redbridge on Tuesday before the road to wembley starts next Saturday. 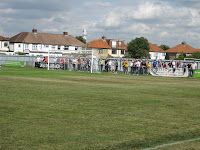