SUBSTITUTES COMBINE TO BEAT THE SWIFTS

It wasn’t the best performance of the season but Enfield Town did just enough to overcome a decent Heybridge Swifts side at The Donkey Dome in the pouring rain on Saturday afternoon.

After 45 minutes of few clear cut chances it was only a Liam Hope penalty, after Adam Wallace had been brought down, which separated the sides at half time.


Heybridge pushed for an equaliser with left winger Solomon Ofori impressing with his pace on the ball and centre forward Luke Callander getting in a few good efforts on target - one of which was well saved and stung the hands of Noel Imber. Callander equalised on 82 minutes and looked to have rescued the Swifts a point but it was not to be for the away side as Town went down the other end and won the game with a goal scored almost immediately after.
Town’s two substitutes combined when new signing Tyler Campbell crossed for Michael Ewang to strike the ball home from just inside the area past former Town keeper Jason Willis
Liam Hope added a third to help him in his pursuit of Sam Newson and the Ryman North golden boot. Needham’s top scorer currently has a tally of 21 league goals with Liam closing in on him on 18 goals. James Baker (AFC Sudbury) and Jeff Hammond (Harlow Town) follow them on 13 goals each.
Callander so nearly reduced the score line to 3-2 when he hit a rocket of free kick from well outside of the box which smashed off the angle of post and bar.  The Swifts front man has one of the hardest shots I’ve seen this season.

Neil Johnston was given sponsor’s man of the match as he put in another hard working shift in midfield but it was the cold end’s opinion that Lee Allen, playing at right back, may have just edged it with his performance against the trickery of Solomon Ofori. Had Lee not been at 100% and given him a bit more space he may set up or scored a goal for the Swifts. Craig McKay also played well in the centre defence with a few well timed tackles standing out.


Ofori has been with the Swifts since November and did score in a trial match for Championship side Burnley  in July 2011. He made a number of appearances for Mauritius Sports in the Essex Senior League last season.
MATCH HIGHLIGHTS ARE BELOW

Elsewhere on Saturday third placed Needham Market dropped points in a 1-1 draw away at Tilbury with Harlow Town and Grays Athletic also winning to make up the play off zone. There is now a nine point gap between Town in second and Needham in third place. Harlow could close that to 7 points should they win their game in hand. A full and detailed table can be found at the official Ryman League website here 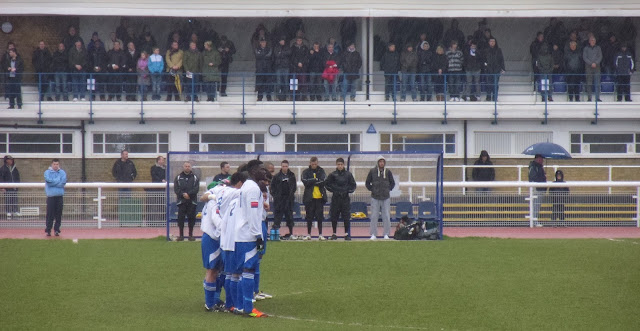 The afternoon started with a minute’s silence to honour the memory of former Enfield FC and Enfield Town groundsman Ronnie Sturgess who so sadly passed away recently.  Ronnie was involved with and a dedicated supporter of the old club for many years and also tended to Barnet’s Underhill pitch where he won an FA Groundsman of the Year award in 2004.
He also managed and assisted Enfield Town with the creation of the new pitch at Donkey Lane where the excellent quality of the playing surface serves well to the memory of a very popular and well liked man.
at 01:23