Enfield Town continued their good form with a fantastic 1-2 win over AFC Sudbury at the MEL Group Stadium on Saturday afternoon. Leon Osei seems to love playing in Suffolk (he had a great game in last season’s 1-5 win) as he put the Town 0-1 up with a good finish followed by a Liam Hope penalty kick to make it 0-2 at half time. Town could have been 4 up at the break as they all but dominated the first 45 minutes. The home side did show some brief glimpses of decent play but when going forward they found they couldn’t penetrate the hard working Town back four and goalkeeper Noel Imber. 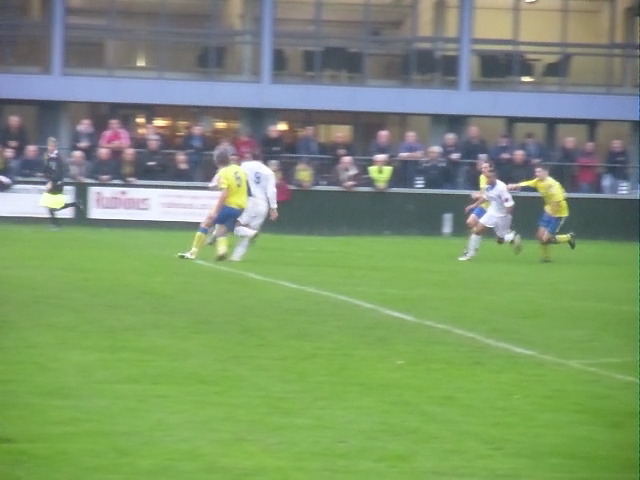 Looking from a neutral perspective the decision to award Town a penalty was slightly debatable as from the replay it looks a soft foul and outside of the box??
As expected the home side came back at Town in the second half and were unlucky to hit the cross bar from close range. They did make the last 10 minutes of the match a little tense when making the score 1-2 from the penalty spot after Jordan Lockie was adjudged to have fouled a player in the box.
It didn’t look as if contact was made with the AFC player going down when Jordan dived in... Could there be a case that on another day both penalties would not be given?? (check out the video from 2mins 27secs and 7mins 53 secs to make your own mind up)

It really was a hard working team performance today with every player putting a shift in for Steve Newing and the result being fully deserved.  Rudi Hall and Michael Ewang impressed in central midfield, Jey Siva defended and attacked well from his left back position and the centre back partnership of the returning Kirby alongside Dave Kendall looking strong.
From their second half performance the cold end thinks that AFC Sudbury should finish much higher than their current sixteenth placed position making the victory even better for Town.
The crowd of 330 was AFC’s biggest so far this season beating their previous best of 267 in the game versus Tilbury on the 27th August.
The game also saw the debut of the #cakewalk goal celebration. For more information why not get involved with the banter on twitter where you can chat to a good number of the Enfield Town FC players such as @jey_siva @Dkendall117 @markkirby10 @liam_hope1987 @MaccaGio @mikeyewang @pt_awallace @caesar_santana and @joeystevens86.
MATCH HIGHLIGHTS ARE BELOW
at 01:07