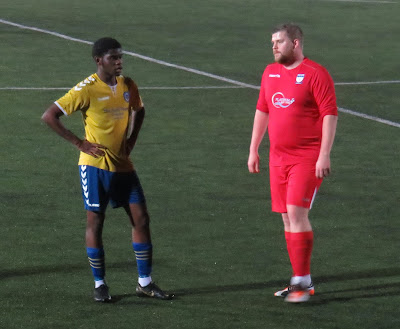 ESSEX SENIOR LEAGUE LEGEND JAMES BRIGGS MADE A LATE APPEARANCE FOR THE VISITORS.


Up until the 72nd minute of Friday night's Essex Senior League game between Woodford Town and Stansted it was the visitors who were much the better side played in in difficult conditions at Harlow Town. The Airportmen had a number of chances to score with former Sporting Bengal United player Ashaan Siddik playing a sitting role in midfield the best performer on the pitch up until then in my opinion - his range of passing and forward runs were very impressive. Marcus Painter (7) had also shown some impressive touches for the home side when they had the ball.

Siddik was given a straight red card on 72 minutes (I presume for something he said to the referee) and only minutes later Woodford were awarded a spot kick for a handball in the box.

Yemi Adelana scored the penalty to make it 1-0 and then doubled the lead for his side with a close range finish. Late on Eddie Mombasa made it 3-0 which was the final score. Stansted will be gutted their 12 match league unbeaten run is over but will know on the balance of play they should of got something out of this game.

Woodford's next scheduled game is a local derby against Ilford at Cricklfields on Saturday 22nd February. The Airportmen will look to put things right at Hoddesdon Town on Tuesday evening.