This game was played on Saturday 9th October prior to the tragic passing of Hertford United founder and manager Gordon Boateng earlier this week. Gordon wasn't present at Birchwood but he would of been extremely proud of the work rate, skill and tenacity his highly talented team displayed to win the game against a Hatfield United team who fought hard for the full 90 minutes.

The out pouring of grief upon the announcement of Gordon's death shows how loved and highly respected he was by football players and fans in the local area. He was an ambassador for Kick It Out anti racism campaign and had also formed the Boateng Academy during his distinguished playing and management career. He helped and advised so many players both on and off the pitch showing care and compassion to many - I'm sure many people are playing the beautiful game today due to the work and passion of Gordon Boateng.

On the Boateng Academy webpage it state's Gordon's motto is "If you believe in something, do everything in your power, don't stop or give up, until you achieve it and finally don't let anyone tell you, that you are not good enough or that you cannot do something" #believeandachieve 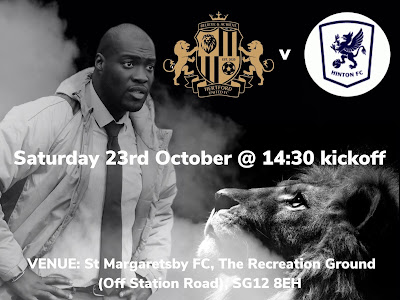 My thoughts are with his friends and family at this time - Hertford United will be playing their game this weekend at home (they currently ground share with St Margaretsbury) to Hinton where a minute's silence will be held in honour of their manager and founder's life. I'm sure many other local clubs up and down the football pyramid will be doing the same for such a well respected man.

Below are match pictures and highlights of the game played against Hatfield United which was one of the best games I've seen for many months. Full respect to Hatfield United goalkeeper Dan Blacktop who played the whole second half carrying what he thought was a minor injury but turned out to be a broken ankle - He made some amazing saves despite this and is a real character to watch on the pitch.

Hertford United have a very impressive squad with some young players who I am sure will play much higher up the football pyramid. Kai Scarlett (number 8) scorer of their first goal had a very good game and certainly looks a very good player with quick feet, a eye for goal, pace and skill on the ball - Most definitely a name to look out for in the future. What impressed me most was they were very bold in leaving three players up (see above picture) on the half way line across the pitch, when defending corner kicks, which helped create their first goal on the counter attack. 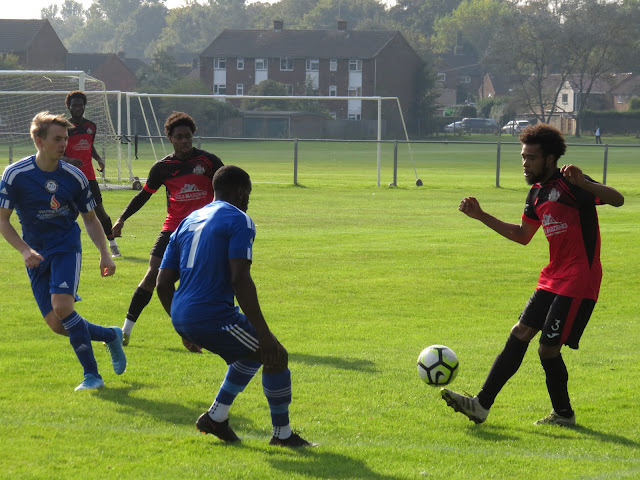 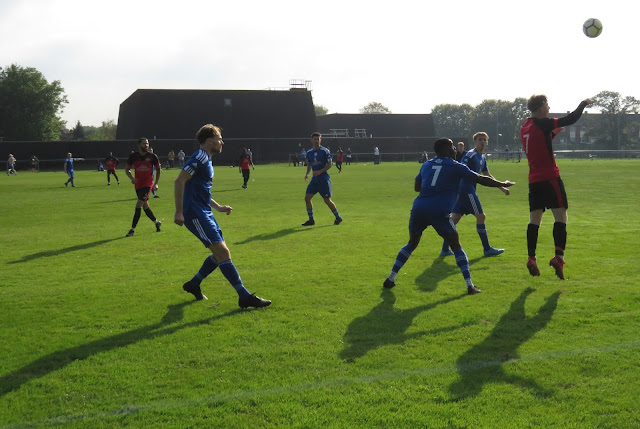 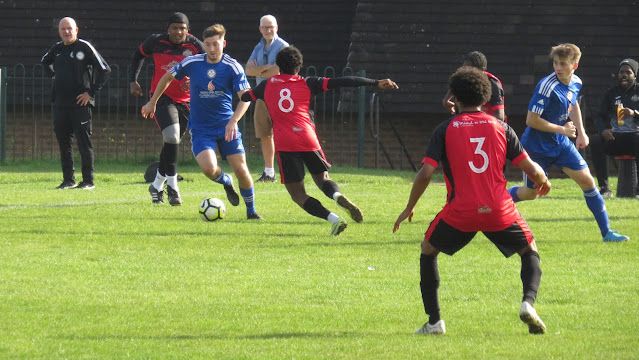 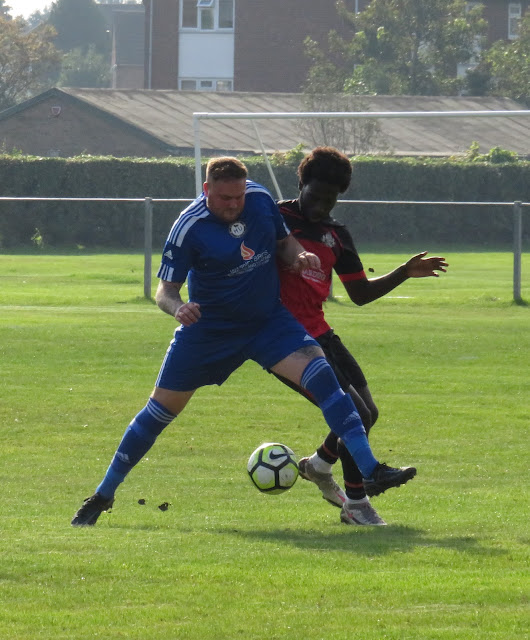 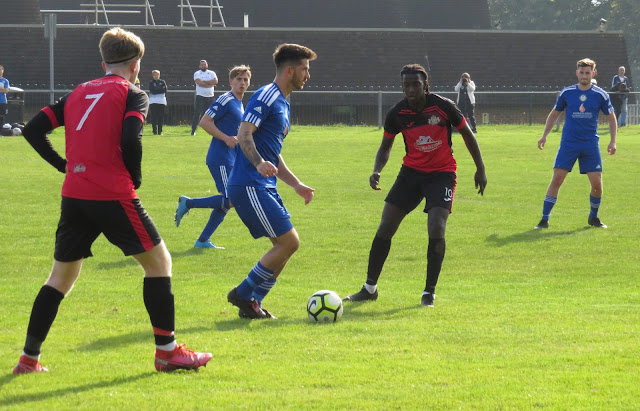 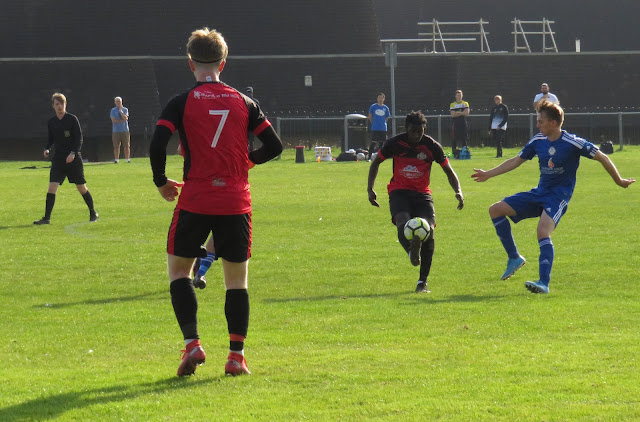 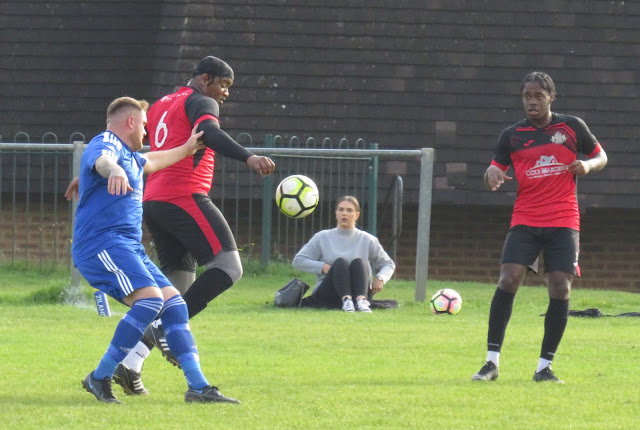 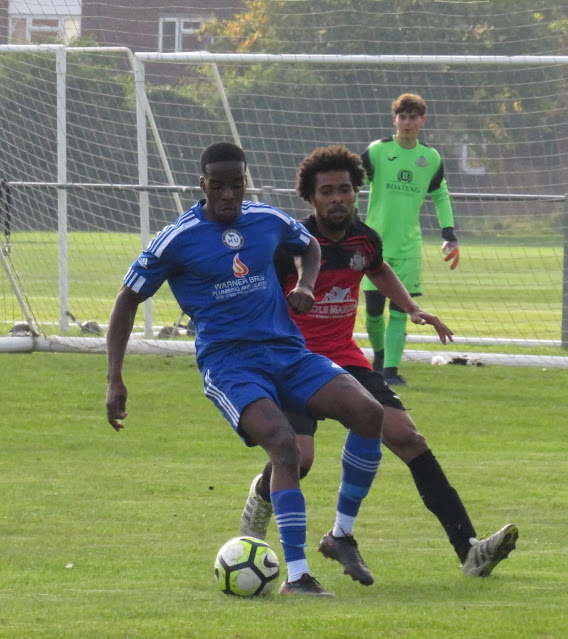 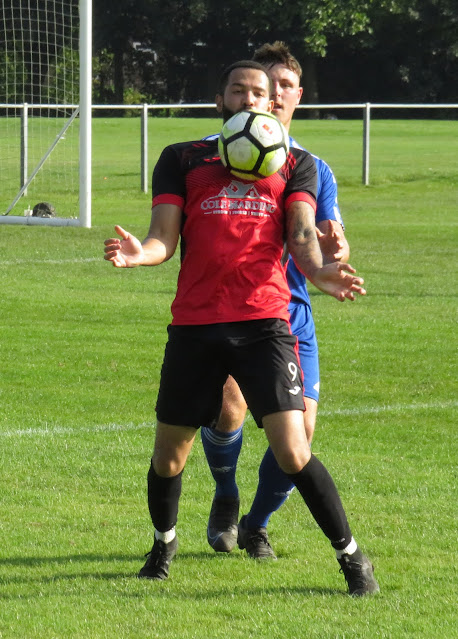 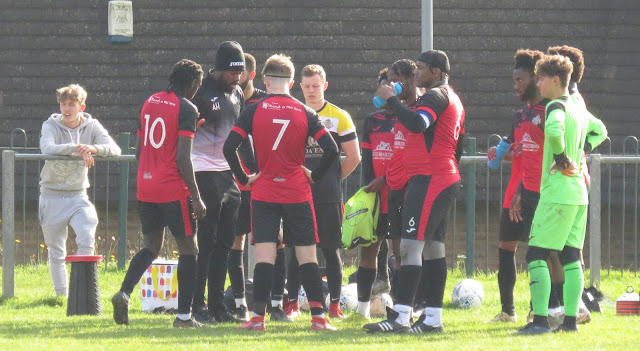 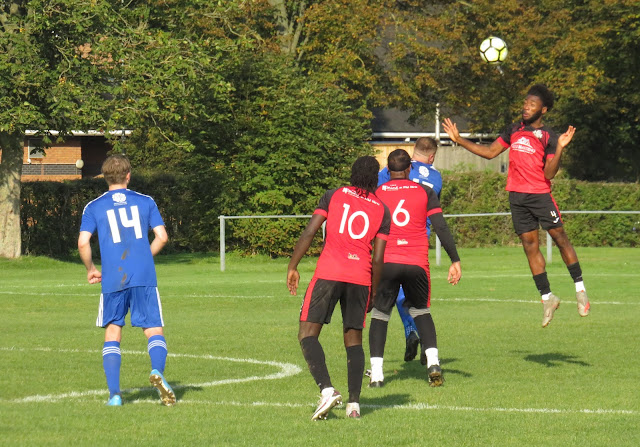 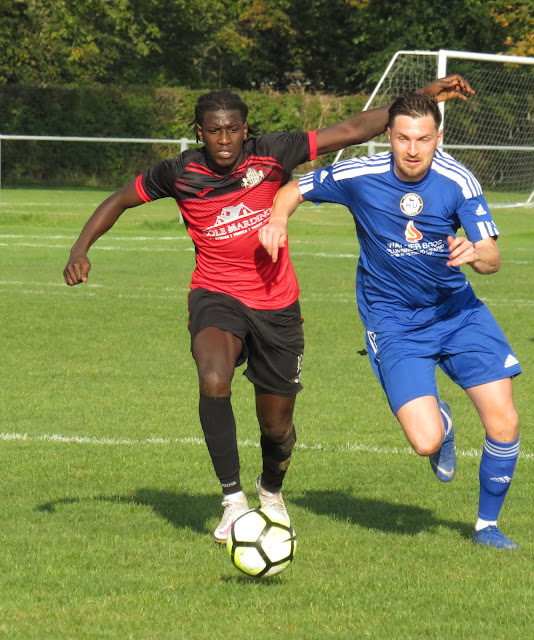 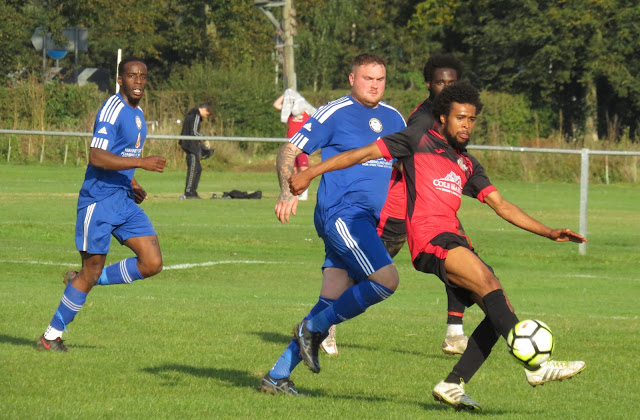 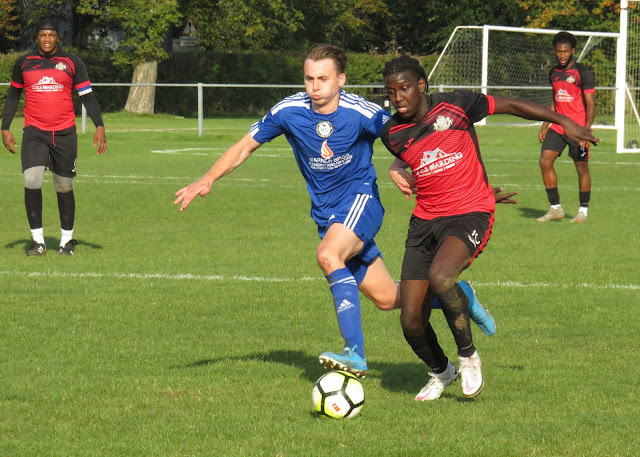 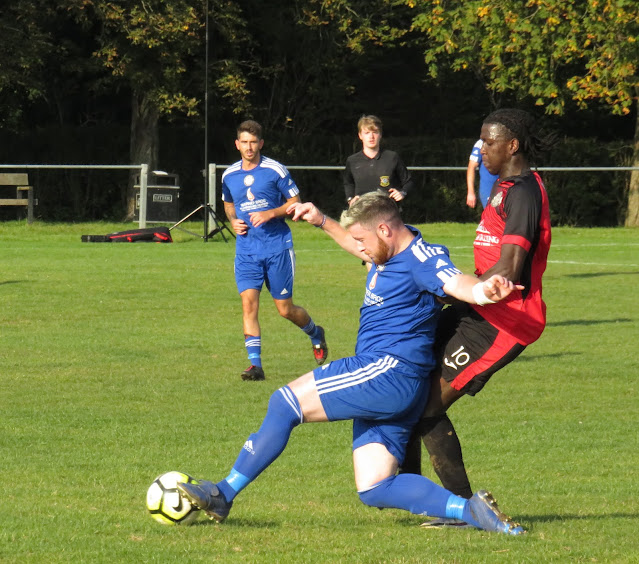 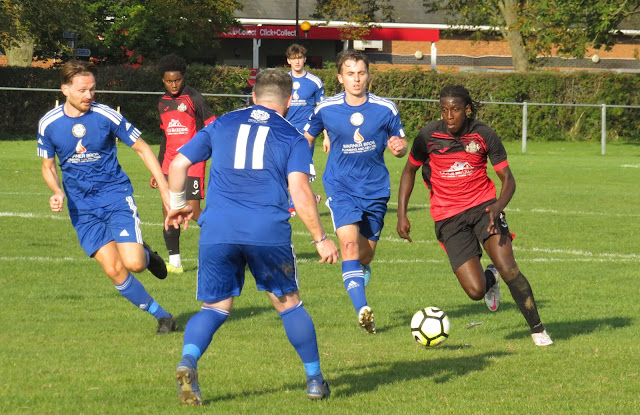 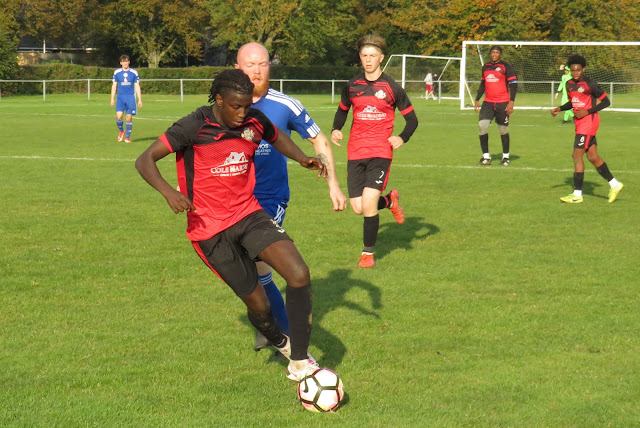 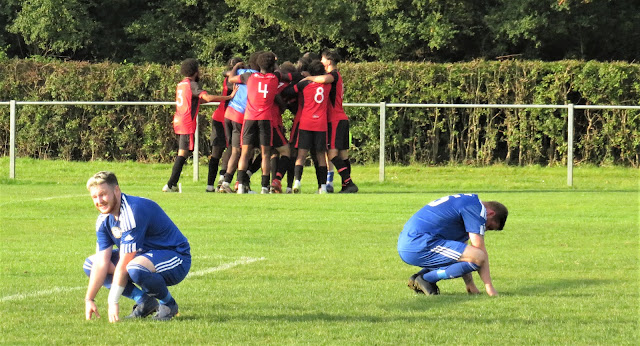 A DIFFERING CONTRAST WITH HATFIELD PLAYERS DEJECTED AND HERTFORD PLAYERS JUBILANT AS THE VISITORS SCORED IN INJURY TIME SECURE A MEMORABLE 2-3 VICTORY. 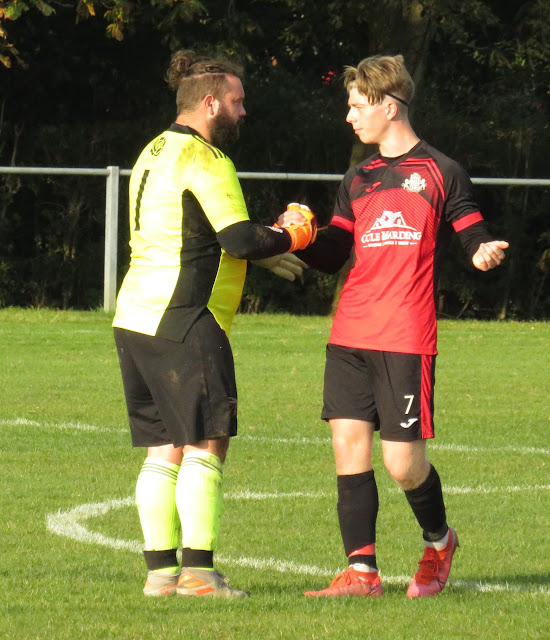 HATFIELD UNITED GOAL KEEPER DAN BLACKTOP SHOWS RESPECT AT THE END OF THE GAME - HE PLAYED IN WITH A BROKEN ANKLE DURING THE SECOND HALF.
Hertford United's game on Saturday against Hinton will be a tough one as the Enfield based side have made a very good start to their campaign winning eight of their ten league games played. I think Hatfield United are much better than their current league position shows - they have only one victory in seven games played - they travel to Evergreen on Saturday.
at 10:39