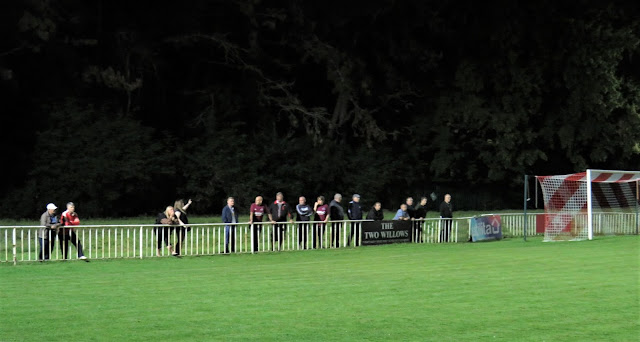 Emirates FA Cup action was on offer at Herns Way last Tuesday evening as Welwyn Garden City welcomed FC Romania for a Preliminary Round replay following an eventful 1-1 draw at Theobalds Lane the previous Saturday. The first game had seen a red card for The Citizens and a penalty kick awarded to FC Romania deep into injury time which got them their goal. A crowd of 174 people saw this game between the two Southern League Division One (Central) teams who are both expected to do well in their league this season. FCR have signed a number of impressive players for this season and one of them in ex Tottenham Hotspur youngster Zylan Stylandies put them in front early in the game with a truly fantastic strike from outside of the box which Welwyn keeper Charlie Crowley had no chance of saving. The teams then traded goals with Jordan Kinoshi and Dave Keenleyside (penalty) scoring for the home side either side of a header from  the experienced forward Jon Edwards (ex of Royston Town) from a Sean Bonnett-Johnson who was last with Romford in the curtailed seasons. HT - 2-2.

On 59 minutes it was 3-2 when Jay Rolfe got a touch on a free kick that was swung into the penalty area. FC Romania piled on the pressure but it was WGC who looked the more threatening in front of goal especially when in the last 10 minutes FCR were reduced to 10 men after German Petrov received a second yellow and a read card for a foul. Nicky Ironton's side deserved their victory which will be remembered by many of their fans for many years to come.

The Citizens now face a tricky away day trip to Norfolk to play Thurlow Nunn Premier Division side Mulbarton Wanderers who have made a good start to their step five season winning three and drawing two leagues games as well as FA Cup wins against Lakenheath (after a 2-2 draw) and Hadleigh United.  There is likely to be a good number of fans making their way from Hertfordshire to give their team more support on The Road To Wembley.

In the league FCR have won three games and lost one so far. They have beaten Ware and Waltham Abbey at home as well as away at St Neots Town with a defeat on the road at North Leigh. They travel to Thame United this weekend followed by a midweek trip back to Herns Way for a league fixture and a chance for revenge.