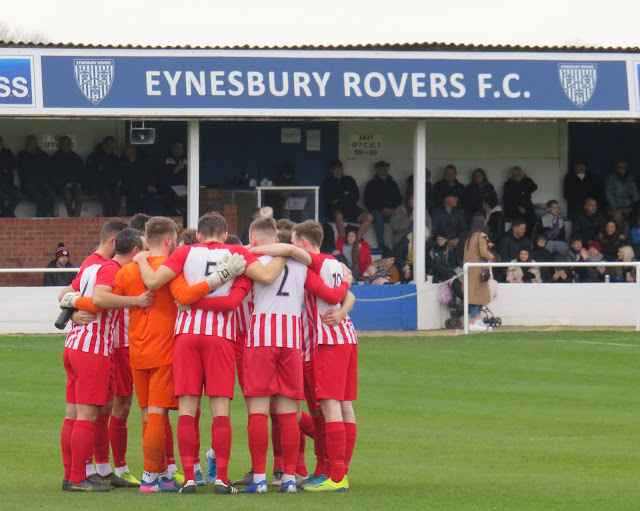 The FA Vase Fourth Round tie between Spartan Premier Division rival's Eynesbury Rovers and Leighton Town on Saturday was one of the best cup ties I have ever seen but I have to say it was unfortunately overshadowed by the foolish and idiotic actions by a number of "fans" off the pitch which have been published and seen on social media and reported via other news outlets - On my footage you can see some objects being thrown from stand which housed the younger element of Leighton's travelling support after Rover's scored their second goal - see below on full highlights video from 7m 20secs.

Those involved in the incidents have no place in football and should be thoroughly ashamed of their actions.

The Football Association are investigating so I'll comment no further and concentrate on what was a enthralling game of football. Leighton Town have issued a statement about the incidents which is shown below. 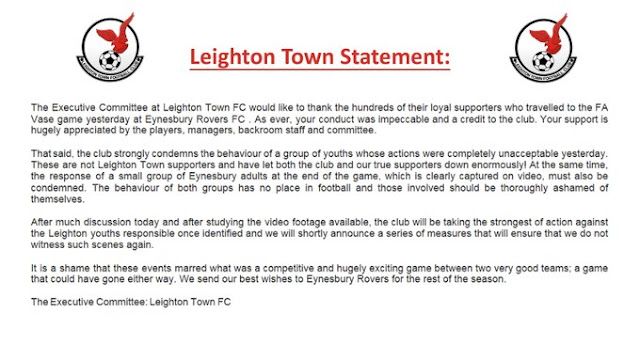 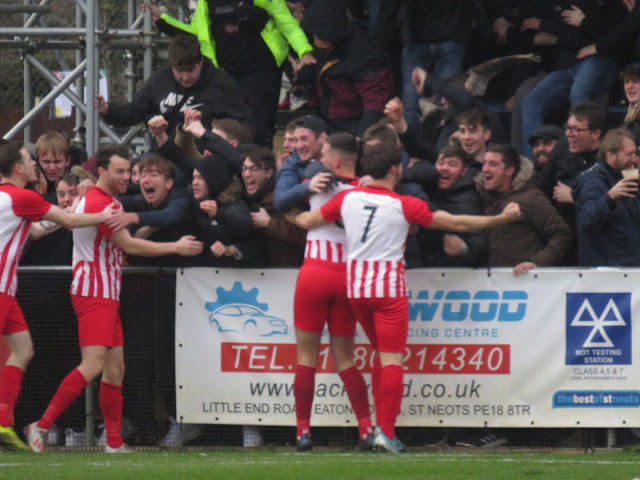 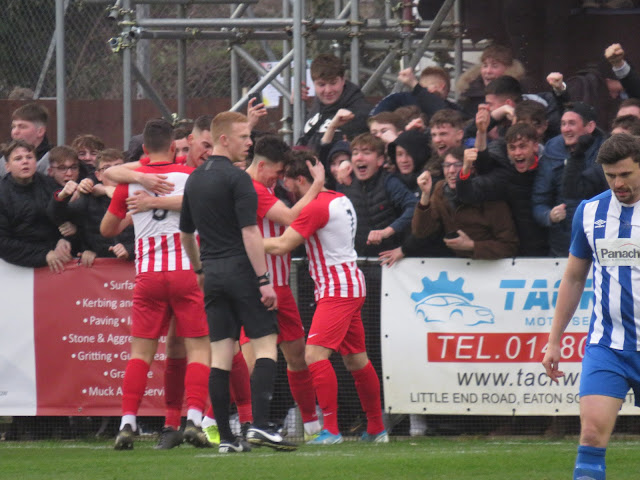 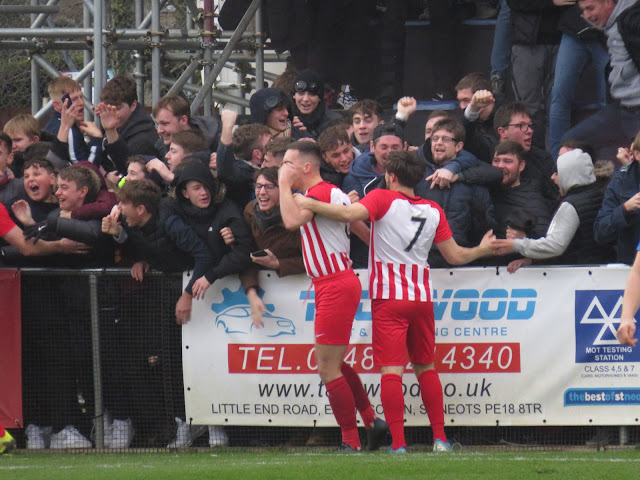 With twenty minutes left in the game it was Eynesbury Rovers who had one foot firmly in the fifth round as they were deservedly 3-1 up.

The visitors had dominated the opening 10 minutes forcing Eynesbury keeper Jamie Greygoose into making a number of good saves and going 0-1 up via an own goal.

The home side got back into the game with Jordan Brown on the left wing looking very lively and causing the Leighton back line all sorts of problems. Their experienced centre forward Steve Gentle (formerly of Bedford Town, Biggleswade Town, St Ives Town and Barton Rovers) held the ball up well and with his height he won lots of balls in the air. Brown was a youth with Cambridge United and did have a trial with football league side Stevenage FC in 2017 - On this performance he could play higher in the pyramid I think. 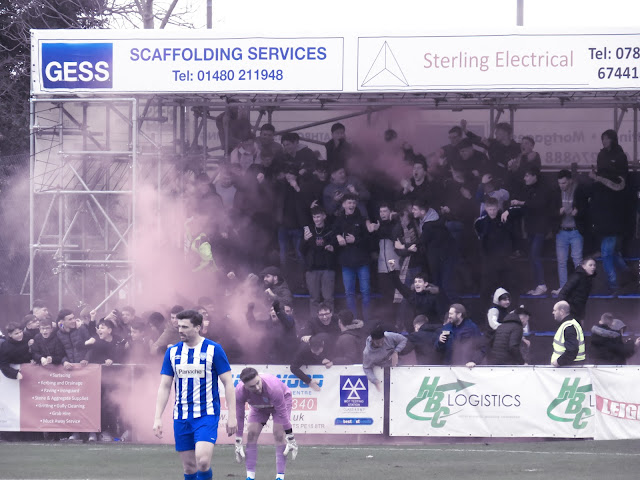 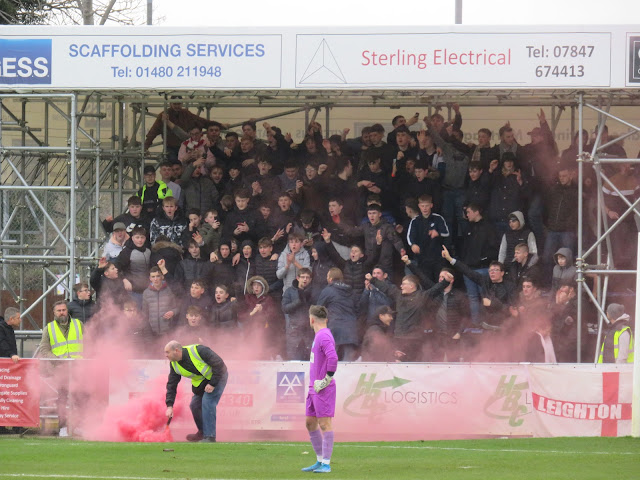 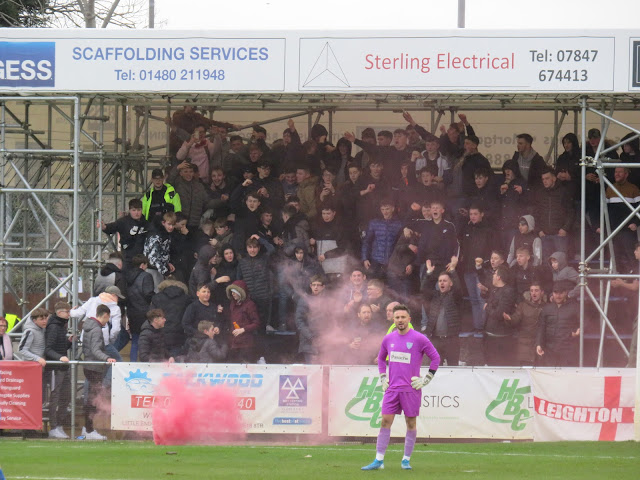 On ten minutes Brown was up-ended in the penalty box after a positive forward run and the referee rightly pointed towards the spot for Craig Daniel to make it 1-1.

There was a real talking point which occurred right in front of where I was standing when Town's Tom Bryant tackled Brown  - this has divided people's opinion on social media with some calling it a red card offence, others a yellow and some saying it was a well timed challenge. See what you think -

With the half time score at 1-1 Eynesbury Rovers took control of the game on 59 minutes when Craig Daniel scored his second goal from close range inside the box.

Jordan Brown then headed in the resulting corner kick at the near post to the delight of the home section of the crowd on 64 minutes and it looked at this stage that Leighton Town were heading out of the FA Vase.

Ben Pattie and Ashton Campbell were then left the substitute's bench for the visitors and it was Campbell who cemented his name into FA Vase and Leighton Town folklore with an astonishing hat-trick scoring with header's on 75 minutes and 83 minutes. Then in jnjury time chesting the ball down on the edge of the box and majestically blasting the ball home into the back of the net.

For Eynesbury Rovers it was so near but yet so far but for Leighton Town they move into the fifth round of the Vase for only the third time in their history. In 03/04 they were knocked out by Andover and more recently in 17/18 they beat Wolverhampton Sporting Club before being knocked out by 1874 Northwich at the Quarter-Final stage. A crowd of 469 people saw the game.

JUST THE GOALS
already viewed over 12,000 times on social media