LEIGHTON TOWN BUILDING FOR THE NEW SEASON WITH SIGNINGS MADE ALREADY 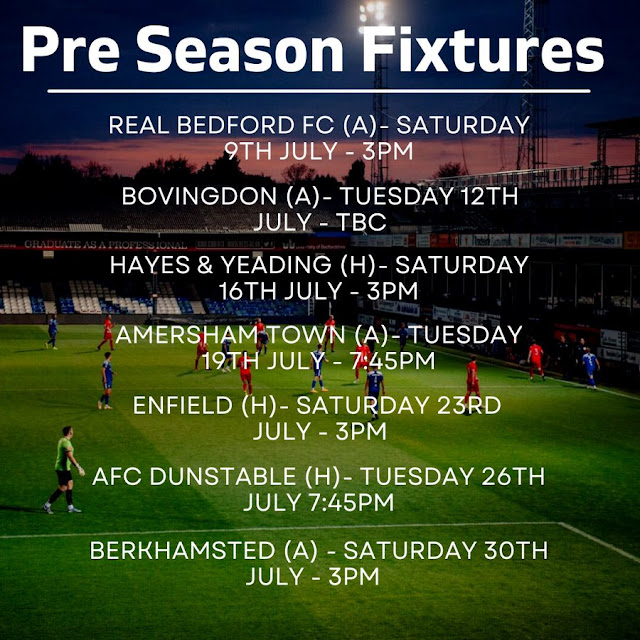 Leighton Town, who finished in 4th place of the Spartan South Midlands League Premier Division and famously won the Bedfordshire Senior Cup beating Southern League D1 Central Champions Bedford Town, have been busy planning for the 2022/23 season. They have announced the above friendly games starting on Saturday 9th July with a trip to SSMFL Division One Real Bedford.

The club have also announced midfielder Luke Pyman who scored in the cup final has committed to playing for Town next season along with the acquisition of brother's Kyle and Gary Connolly who played for Step Three side King's Langley last season.

Kyle is a left-back who who joined Kings Langley for Hemel Hempstead Town in 2019. He made over 200 appearances for The Tudors and has also spent time with the academy teams of Arsenal, Boreham Wood and Watford.

Gary has been with Kings Langley since 2011, aside from a year in Australia, playing in over 250 games for them. He is a defender/midfielder who played for Leverstock Green prior to joining KLFC.

Of course it's very early days yet but with former Hemel manager Lee Bircham in charge being assisted by former Aylesbury United boss Tony Joyce since the end of March it's likely they'll be amongst the favourites for the SSMFL Premier title for next season. 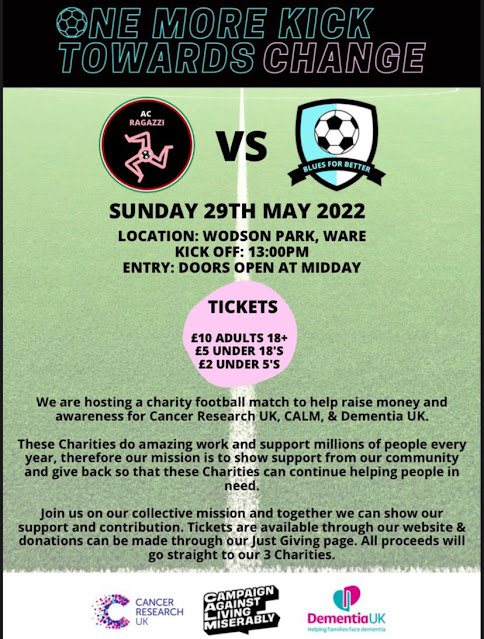 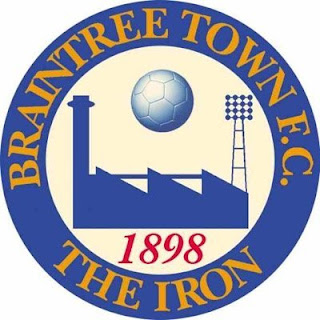 Angelo Harrop has stepped down as joint manager of AFC Sudbury to to take the stop up to Vanarama South side Braintree Town.

Harrop had been joint boss of the Suffolk club since the summer of 2021 and along with Rick Andrews oversaw their historic run to the FA Cup First Round proper where they played Colchester United at The MEL Group Stadium.

Harrop started out in management with Stanway Rovers in 2013 where he had also been Director of Football - He also played for Stowmarket Town in the 17/18 when Andrews was boss.

AFC Sudbury, who missed out on the Isthmian North Division play-offs finishing seventh last season, have confirmed Andrews will stay as Manager and have wished Angelo all the best getting his chance to manage a club two levels above.

Since dropping down from The National League in 2019 The Iron were in 21st (of 22) place of the 19/20 curtailed season where there was no relegation. This season they finished 17th (of 21) with four wins in their last ten games pulling them away from the one relegation spot.

AFC have announced the signing of striker Nnamdi Nwachuku who played for Marlow in the Isthmian South-Central Division last season scoring 26 goals in league and cup games.

Nwachuku played in the Colchester United and Reading academy before making his name in non-league football with Coggeshall Town when The Seed Growers rose from the Thurlow Nunn Premier to Step Four - He scored 101 goals in 100 games for the Essex club. He moved to Welling United in October 2019 but this didn't work out and he then played for Cambridge City before moving to Marlow.

Only Tilbury, Coggeshall Town, Barking, Hullbridge Sports, Witham Town, Basildon United and Romford scored fewer goals than AFC last season so the addition of Nwachuku will certainly help their goals for column for the 22/23 campaign. 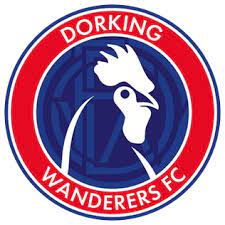 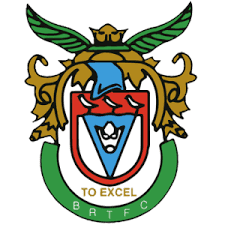 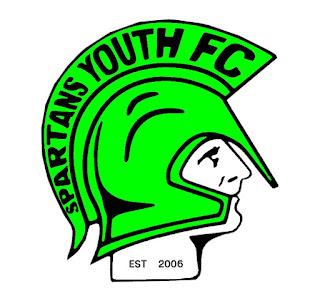 Brentford have rightly made headlines in recent years with their promotion to the Premier League but there is another club in the local area who have progressed up the football pyramid this summer.

SPARTANS YOUTH FC who have played matches in Carvillle Hall Park, Gunnersbury Park and Boston Manor Park since they were formed in 2006 - All of which are a stone's throw from both Griffin Park and The Brentford Community Stadium.

Spartans played in the Middlesex County League in the 15/16 and 16/17 campaigns before joining the Surrey Elite Intermediate League in 2017 which is now known as the Surrey Premier County Football League. The first team have been playing games at Northwood FC for the 2021/22 season which whilst it's not ideal at around 13 miles away from their spiritual home it's the only thing the club can do at present to progress to Step Six of the non-league ladder.

The club were founded in 2006 by Mark Stow who has worked as a scout and in recruitment for Chelsea, Watford, Exeter City, Cardiff City, Charlton Athletic, Colchester United and Blackburn Rovers. They now have a number of teams from youth to the first team.

For the 2022/23 SPARTANS YOUTH will be playing the Combined Counties League Division One alongside Bedfont & Feltham, Hillingdon Borough, FC Deportivo Galicia and Molesey to name a few teams.

I WISH SPARTANS YOUTH FOOTBALL CLUB THE BEST OF LUCK FOR THE FORTHCOMING SEASON.

The above is a form comparison (not including the two play-off games) for Brentwood Town's season both prior and after the appointment of former Aveley, Braintree Town, Bishop's Stortford and Chelmsford City boss Rod Stringer. The Blues qualified for the play-offs by finishing in third place beating Stowmarket Town in the semi-final and losing to Canvey Island in the final on penalty kicks after a 1-1 draw at Park Lane. Their final league position was just five points below title winner's Aveley so it could be argued had he been in charge from the the start of the season they may well have won the league!
There is no doubt with Stringer in charge for the 22/23 season the Essex side will be one of the favourites for The Pitching In Isthmian League North Division title. 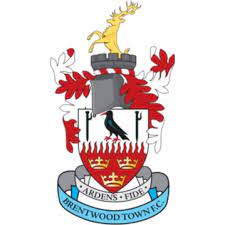 MR BOWERS SIGNS FOR THE SCHOLARS 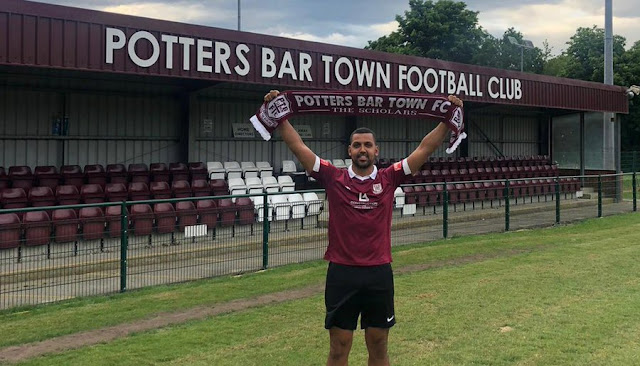 They have announced 'Mr Bowers & Pitsea' has signed for the club - Lewis Manor scored 22 goals in 44 games for the Essex club last season and was instrumental in their historic FA Cup run to the First Round and playing League One Lincoln City.

Manor holds the record goal-scorer and number of appearances for Bowers & Pitsea - His final appearance for the club put him on 275 games where he fittingly scored the final goal of the season in the 2-2 draw at Lewes.

He will no doubt get a fantastic reception from the fans when he returns to The Len Salmon Stadium with the Hertfordshire club next season.

Potters Bar Town have also announced the signing of centre-back Ethan Kaiser who was with Cray Wanderers last season. He joined The Wands mid-way though the 21/22 campaign from South-Central Division side Bedfont Sports after impressing Cray in a FA Trophy tie between the two clubs in November. He came through the ranks at Tooting & Mitcham United before making a handful of appearances for Tonbridge Angels in the 20/21 season.

There will no doubt be more signings announced in the coming months - Will The Scholars, under the management of Sammy Moore, finish higher than the thirteenth place they ended the 21/22 campaign in which is the highest finish in the non-league pyramid they have ever achieved in their history.

at 20:02 No comments:
Older Posts Home
Subscribe to: Posts (Atom)