It was derby day last Tuesday evening as Wodson Park entertained FC Broxbourne Borough who made the short journey up the A10 for a Spartan South Midlands League Division game with a crowd of 54 people watching on.
On a bumpy surface this wasn't a classic game with Wodson scoring four goals in the second half through Craig Handy, Antonio Fusco and Mason Todd (2). The first goal was scored after a poor clearance by Broxbourne keeper Liam Nugent and their fourth was from the penalty spot after a much debated penalty decision. Broxbourne, now managed by Graham Lee, had played some good football beforehand with midfielder Isaac Pedro standing out for me. He is only 17 years of age but played really well in the holding/defensive midfield role. He is definitely a name to look out for. 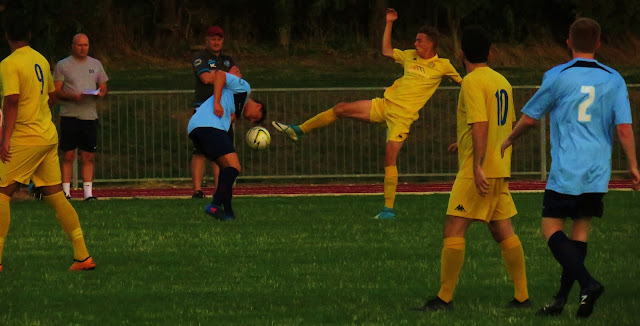 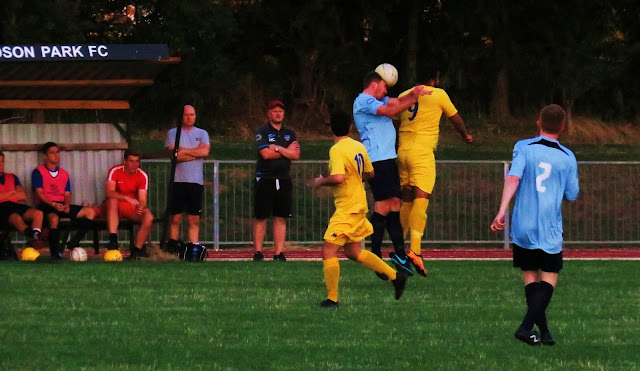 On the balance of play Wodson deserved the victory but it didn't really feel like a 4-0 game - it may have been a different story if experienced former Cheshunt and Enfield Town midfielder Joe O'Brien hadn't had to have come off on 20 minutes with an injury.

Special mention goes to former St Margaretsbury player Mason Todd who came off the bench for Wodson and scored two of the goals as well as assisting with creating one. Good work!

The game was the last in charge for Neil Conner who stepped down from his position as Wodson manager due to a change in personal circumstance to be replaced by Neil Draper - Conner will still be part of the club's management structure. Draper has previously managed Welwyn Garden City and Hertford Town u25/reserve teams.

This game was played nearly a year to the day to last season's league match between the two sides which was played on Tuesday 15th August 2017 - both team's starting XI's were much changed since then with only Rob Green, Craig Tolley and Stephen Towers left in the Wodson team and just goalkeeper Liam Nugent in the FC Broxbourne side.


Broxbourne banished the memories of this game with a good 2-1 home victory over Buckingham Town yesterday. Their next game is at home to Codicote next Saturday - The Cod Army lost 4-3 at Brimsdown yesterday. They then visit current league leader's Enfield Borough in the Division One Cup on Tuesday 4th September whose assistant manager is Roy Bleau who is the club's former boss.

Neil Draper has two home games to start his career as Wodson boss this week where they entertain Langford in the Division One Cup on Wednesday before Hillingdon Borough visit on Saturday.
at 20:22