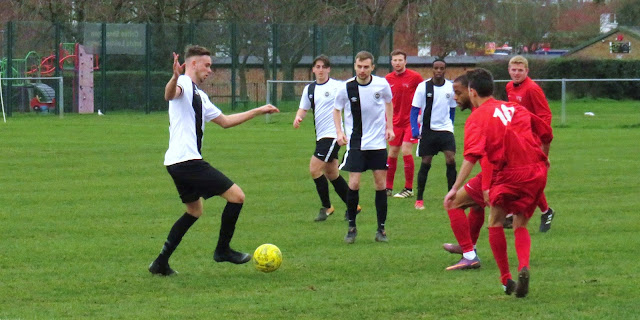 It was a great afternoon for title chasing Cockfosters Reserves in the Hertfordshire Senior County League Division One yesterday as they ran in five goals with no reply against Hatfield United at Birchwood.

'Fosters had drawn 0-0 with Old Parmiterians in their last game with Hatfield United also drawing 2-2 in a local derby with Welham Albion. The club had recently announced a partnership with Hatfield Town where players will get game time playing for United and a chance to impress.

The visitors took the lead after only five minutes when Aaron Crockett received the ball on the half-way line and was rewarded with his energetic positive forward run to the edge of the box ended with a shot past the keeper to make it 0-1.

Deon Arthur made it 0-2 when some good play on the left hand side saw him with space in the box to easily put the ball into the net past the advancing goalkeeper. 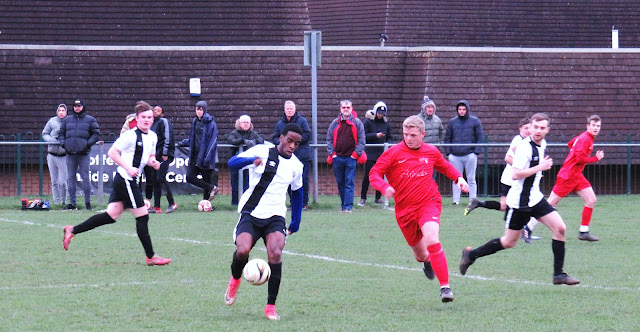 Francesco Di Bello made it 0-3 just after the break with a goal I wasn't able to capture on camera.

As the weather got colder and wetter 'Fosters scored two more via former Amersham Town and Harefield United player Junior Ajaloleru who had a really impressive game in a left back/left wing position.

The fourth goal was somewhat controversial when after knocking the ball in the net from a cross from the right hand side the linesman flagged for offside which was over-ruled by the referee. The fifth goal was better when another cross field ball from the right was headed on and allowed Ajaloleru, in acres of space, to skillfully touch the ball past the keeper and into the net.


Bush Hill Rangers, with four games in hand, look best placed to win the title in Division One but there are many games with twists and turns to play as yet. Rangers recent 1-0 win over Oxhey Jets Reserves could be a very important result.

Next weekend The Jets travel to Buntingford Town with Cockfosters at home to Welham Albion.

Bush Hill Rangers face PFC Victoria London at home in the Middlesex FA Intermediate Cup Quarter-Final next weekend. The visitors are riding high in the Middlesex County League Premier Division (one step above) and having a great season. It has the makings of a very entertaining encounter. Kick is scheduled for 2pm on the 3G pitch at Donkey Lane so anyone visiting for the Enfield Town v Corinthian Casuals game with a 3pm kick off might want to watch the first half of this game to give Rangers so much needed support.

Hatfield United's next game comes in two weekends time when they travel to play Hinton FC.

Hatfield's other sides had mixed fortunes yesterday. Town's under 25's won 1-4 at Buntingford Town Reserves despite playing some of the game with nine men following two red cards.

Town's first team lost 3-0 at Ampthill Town and are still battling to avoid finishing bottom of the Spartan South Midlands League Division One which with both Codicote and Amersham Town's form picking up of late is becoming increasingly difficult. Jason Beck's has rebuilt the side since he came into the job at the beginning of December so hopefully a positive results are on their way with all the hard work on in training that is going on. It's now a very long nineteen games since The Blue Boys last picked up a league win.