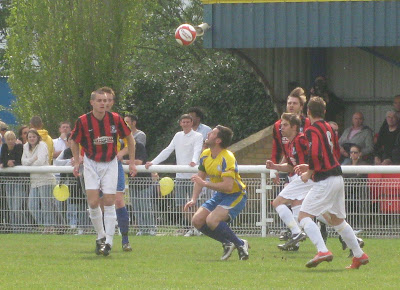 Enfield Town's promotion dream ended yesterday despite a resilient fight back against a strong Concord Rangers side who dominated the first twenty minutes of the game which enabled them to take a 2-0 lead which helped the Canvey Islander's to victory.

The game changed on a pivotal decision in the second half when Town had had the better of the play from the break and the game was finely balanced at 1-2. Stuart Blackburne chased a ball into the box, got a touch and appeared to be brought down by Ranger's keeper Dale Brightly. Most members of the 751 crowd crammed into Thames Road thought penalty kick, only for the referee after consultation with his assistant to wave play on and then book Blackburne for diving, which appeared incredibly harsh.
It was great to see so many fan's old and new present outnumbering the home supporters by a good percentage, It was just a case of it wasn't to be this year for the Town!

Rangers started the brighter team and took the lead after 5 minutes when a free kick from the edge of the box was powerfully headed home by centre back John Easterford, It was 2-0 after just 20 minutes when right back Ashley Miller unleashed a brilliant shot from outside of the box which cracked against the cross bar for Steve King to react first and head the ball past Rob Blackburne in the Town goal.

Rob Blackburne got his hand to John Easterford's header but couldn't keep the ball from going into the net
Town bravely fought back into the game and had a few half chances with Stuart Blackburne inches away from making it 2-1 when his rolling shot hit the post just before the break.

Into the second half and Town came out attacking the Concord back four and got the break they required when King handballed in the area right in front of goal. Stuart Blackburne scored the resulting penalty and it was game on.

Brightly made a comfortable tip over the bar as Town pilled on the pressure and it was then the controvesial decision occured. 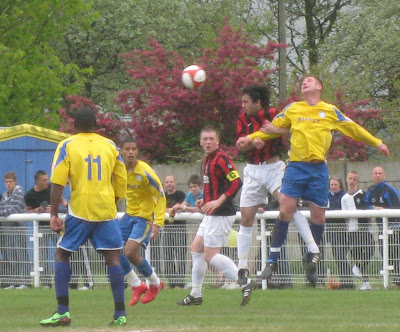 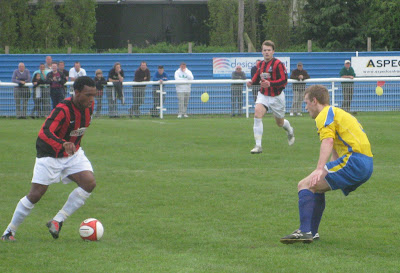 The very impressive Lyle Taylor was denied twice by good saves from Rob Blackburne before Danny Heale bundled the ball over to seal the home side's 3-1 victory.
Looking at the match from a neutral's point of view the cold end has to say on the day Concord Rangers were the better side and just about shaded the game.

There were 19 other Ryman Division One (North) side's who would have traded places with us yesterday to play in the final. Last year when we lost to Ilford 0-1 at home in the penultimate game of a very forgetful and disappointing season we would of never thought in our wildest dream's we'd be in a play-off final a year later. That success can only be put down to the hard work of Steve, Del, Jason, Bomber and the squad of players they have assembled. Travelling on the Team coach yesterday the cold end got to see what a great bunch of lads they are.

The Town player's did their very best yesterday and can hold their heads up high and proud after such a fantastic season where we went so close to promotion glory.
Now onto one final game - the Middlesex Charity Cup Final on Monday night and some silerware??