"BOTTOM OF THE LEAGUE AND HAVIN' A LAUGH" 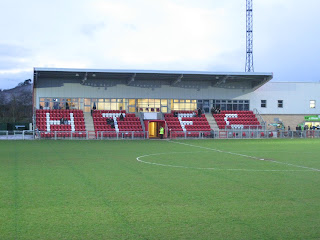 You have to hand it to the loyal Hawk's fans who encouraged their team with some brilliant support from the terraces of Barrows Farm tonight. Despite being bottom of the league and facing possible relegation to the Essex Senior League they turned up with their famous Air Raid Siren and sang loudly throughout the game. The cold end sends full marks out to everyone of them!!


The game tonight had a passing interest to Enfield Town fans as we face Maldon Town on Saturday and then Harlow Town on Bank Holiday Monday. Despite all the rain that has fallen over the past few days the Barrows Farm pitch was in great condition with the match kicking off in blustery very cold conditions. 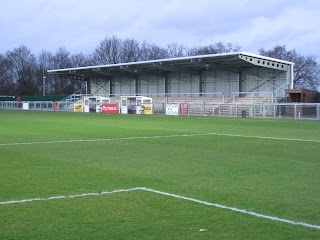 To be honest the first half of the game was a pretty poor affair with no goalkeeper making any real save of note. The Hawks were forced into two changes with Captain Ryan Maxwell coming off with what appeared to be a head injury for Adriano Lawson following an unintentional clash with Maldon Town's captain Stanley Murvo after only 10 minutes. Centre Back Paul Kear came off just before the break for Tom Gerraldi after picking up a knock.

The Hawks have bags of pace going forward with yellow booted centre forward Tashan Francis and winger Reece Dobson (who impressed against Enfield Town at Goldsdown Road earlier this year) causing the Maldon back four a few problems to deal with. The only chance Maldon had throughout the half was a soft shot from the edge of the box which was easily saved by James Hasell.

Harlow had a few chances but never really worked Jack Smelt in the Maldon goal to make any save of note. Francis put a shot from the edge of the box just over the bar and substitute Lawson had a shot across the goal from the right hand side which looked closer than it was.

Maldon took the lead shortly into the 2nd period when after a corner the ball broke to top-scorer Jack Jeffries with only Hasell to beat. 'JJ' as he known showed he knows where the goal is and slotted the ball into the net to make it 0-1.

It was then The Hawk's fans came out with the chant of the night - 'bottom of the league and havin' a laugh'.

It was soon 1-1 when after a corner kick came back out to Shaun Gliddon his subsequent cross turned into a shot of sorts which bounced once in front of Adriano Lawson who may have got a small touch to the ball which went into the net and cause the Air Raid Siren to be set off.

Maldon made it 1-2 after 70 minutes when the impressive centre midfielder James Abbott made a lovely run into the box and the ball broke to Laurant Hamici whose shot into an unguarded net (Hassell had dived at the ball when Abbott had it) won the game for the away side.

The Hawks faught hard and plugged away to the final whistle but had no luck in creating any further chances with Maldon holding on and looking comfortable towards the end of the game.

In short, this game was not a classic with Maldon happy to take home the three points with two well taken goals from their only two real chances.

The damage seems to have been done to Harlow Town with all the boardroom upheaval at the beginning of the season and the widely reported financial problems at the club. With a terrible start to their campaign and then the 10 point deduction it has been impossible for the Hawks to catch up. They have turned over a large number players which is illustrated in the fact that not one of the starting line-up was the same at when the cold end saw The Hawks bow out of the FA Cup against Kingsbury London Tigers on the 1st September 2009 and only the impressive Dobson remained from the team who started against Town on the 2nd February.

What can Enfield Town expect on Saturday?? Maldon are a side who defend well with captain Stanley Murvo sitting in front and protecting the back four allowing Maldon's other centre midfielder James Abbott the freedom to run with the ball. They are a side who don't seem to create many chances of note but when they do they seem to be pretty clinical with Jack Jeffries and Laurant Hamici both knowing where the goal is. They looked like they lacked pace at the back so if Town can run at their back four it could create openings and chances on goal.

For our trip to Barrows Farm on Bank Holiday Monday we can expect lots of fight from the Hawk's team with bags of pace up front in particular imposing centre forward Tashan Francis and skillful winger Dobson.

Adriano Lawson's shot across goal for the Hawks