Town came away from Cricklefields with a deserved three points in the bag after Saturday's game with Waltham Forest. On a difficult playing surface that is showing the signs of two teams playing on it week in week out The Stags put up a decent performance at the back putting lots of men behind the ball against their visitors. The home side featured two ex Town players within their ranks in goalkeeper Eric Barratt and Midfielder Elton Sackey.

It was Barratt (who was known as Eric Pudaloff when he made three appearances for the Town in the  2008/09 season) who kept his team in with a chance during the first making two good saves from Michael Ewang and Liam Hope. The first from Ewang was straight out of the top draw.
The game was won in the second half with goals from Leon Osei and Liam Hope. The Stags pulled back a late goal when what appears to be a very soft penalty was given against Craig McKay.

Substitute Joel Parker's spot kick was well saved by Noel Imber only for fellow sub Arian Retkoceri to be first to the ball to make it 1-2 with only a few minutes left. In truth this was only the real shot The Stags had on target and although Manu Dagher (who impressed in the Forest game at the Queen Elizabeth stadium in December) and target man Richard Shittu worked hard they didn't cause Noel Imber any problems during the match.

Perhaps Forest were missing the talents of Courtney White (6 goals in 11 games during his recent loan spell from Premier Division Billericay Town) who scored twice for his parent club against Cray Wanderers at the weekend.

The other talking point in the match was Elton Sackey receiving a straight red card for a challenge in the second half. See replay on 8min 40sec + on video to make up your own mind??

The cold end apologies for the footage of the first Town goal being so short. My big fat sausage fingers pressed the wrong button when I was editing and deleted the start and finish of the move.
TEAM LINE UPS 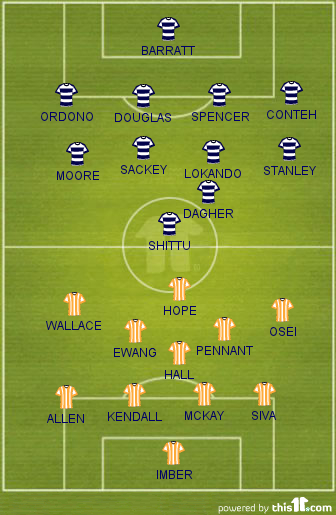