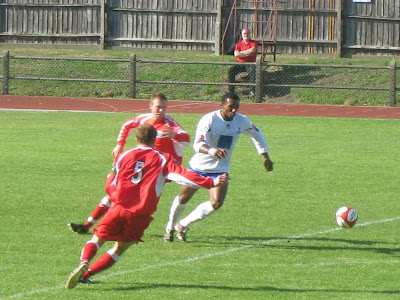 Enfield Town were dumped out of the FA Cup this afternoon after a horror showing in the first half at Stompond Lane. Town quite simply didn't turn up in the first 45 minutes, there was no attacking play worthy of any mention. It was very disappointing for supporters, players and management as on the most important game of the season to date Town were turned over by an ordinary looking Swans side.

Basking in the sunshine on a glorious day whilst sipping on bottles of Peroni there were discussions of if we win this one and get through two more rounds we could play at Elland Road, Carrow Road, The Valley or St Mary's. Okay, we were getting a bit ahead of ourselves but we can dream!! Walton & Hersham's club house is more of a pavilion and was very nice indeed.

The Swans took the lead from the penalty spot after Dave Blower appeared to trip a Walton player inside the box, It was a soft foul to give but it was one of those ones you've seen given and not given. The spot kick went right whilst Rob Blackburne went left. 1-0 to Walton 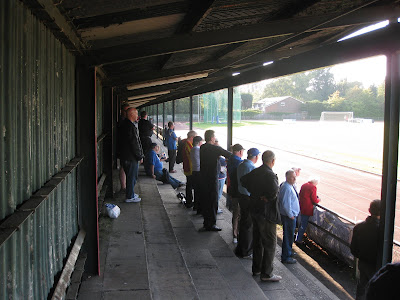 Walton were well on top of the Town side then for the rest of the half and unsurprisingly made it 2-0 when a cross from the left hand side was expertly headed past Rob Blackburne's right hand. He stood no chance and no keeper would of saved it.

Town should of taken the game to the home side and it may have been a different story, Walton were nothing special but were much better than Town in the first half. In fact it was that bad some Town fans took to studying the A-Z to work out a better route home avoiding the traffic jam's on the M25.

The second half was slightly better with Roberto Minniti coming on for Stuart Blackburne early on. Stuart had a rare off day but he can be excused as there were reports he felt ill on the team coach. The Italian made an instant impact winning a penalty for another soft looking trip inside the area, Was this the referee leveling things up from the spot kick he gave Walton in the first half??

Rudi Hall converted the kick and it was game on at 2-1. The dream was still there despite how poorly Town had played.

***RUDI HALL'S PENALTY KICK***
Matt Thomson then put a lob/shot towards the goal which for a moment looked like it was sailing gloriously towards the back of the net. Only for a moment though as it flew over the bar past the Walton ball boy who was seemingly disinterested in the game sitting down not even bothering to run to get the ball. Would of it been a different story had the home side been loosing??? The cold end thinks so. 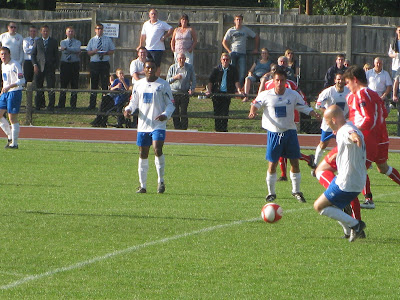 Richard Morton then replaced Paul Marks and Billy Healy for Matt Thomson, Town were playing the long ball over the top and struggling to make any in-roads on the Walton goal. 75 minutes passed until we had a meaningful shot of target from open play when Rudi's shot was blocked into the path of Adam Wallace who passed the ball into the back of the net sparking mass celebration on the far terrace at Stompond Lane from the travelling fans. We had played awful but got out of jail... 2-2, we'd take a draw.

It was all in vain though as the goal of the match was scored by Walton when a free kick just outside the edge of the box was curled over the wall right into the top left hand corner past Rob Blackburne to much disappointment. This was cruel on Rob who was the cold end's man of the match for Town. During the second half he commanded his box and claimed mostly all the crosses put over by the home side.
Near to the end Chris Wild who had pushed forward from the back put a header on target but straight into the keeper's hands.

***Chris Wild's header***
Final Score 3-2 and Town are out of the cup.
Enfield Town were very poor in the first half and that's what put paid to the game, For whatever reason the team didn't turn up. The second half performance was a little better with the players working hard to get back into the match against an ordinary looking Walton team but the fact Town had 3 attempts on target throughout the match tells a story.

The free kick to win at the end of the game was cruel but the FA Cup is sometimes wonderful and sometimes heartbreaking which makes it the world's greatest competition. Maybe next year??
The cold end wishes John Crumplin's men the best of luck in the next round even though he was very dispointed looking at the home player's celebrating on the pitch after the game.

Other Ryman North teams in the Cup had a great day with a good giant killing coming a Scraley Road, Heybridge swifting Conference South St Alban's City 1-0. Lowestoft Town dumped Boston United out of the competition on the East coast in front of a massive 1,134 crowd, the final score being 1-0. Potters Bar Town won easily 3-0 at home versus Ryman South Whitstable Town, Concord Rangers crashed out at Slough Town 2-0 and East Thurrock United lost 2-0 at Welling United. Wingate and Finchley drew at home 2-2 to Aylesbury FC and face a tough replay at Haywood Way on Tuesday night. This result put paid to my single of the week.
The Director's beer influenced treble blew out with Redbridge drawing 2-2 with Tilbury and Leyton somewhat surprisingly being roundly beaten 4-0 at Thamesmead Town.
The Toonstar continued his brilliant record when Rotherham, Rochdale and Notts County all duly obliged with home wins. With Town fans sick as parrots he is reportedly over the moon on the train back from Suffolk following a great 4-0 win over ex Sunderland boss Roy Keane's Ipswich Town side in the Sir Bobby Robson celebration match.
LONG MAY YOU CONTINUE TO BASH THE BOOKIES MR TOONSTAR!!!
at 20:27