CLEAN SHEET, TWO GOALS & A WELL DESERVED THREE POINTS - A BRILLIANT START TO THE SEASON FOR LONDON COLNEY WHO WIN AT COCKFOSTERS 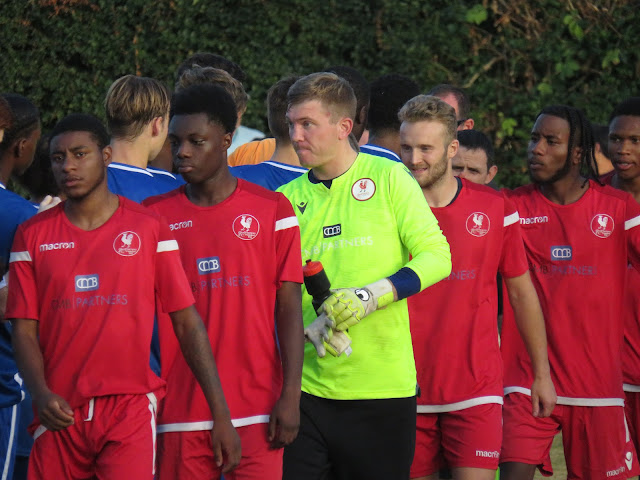 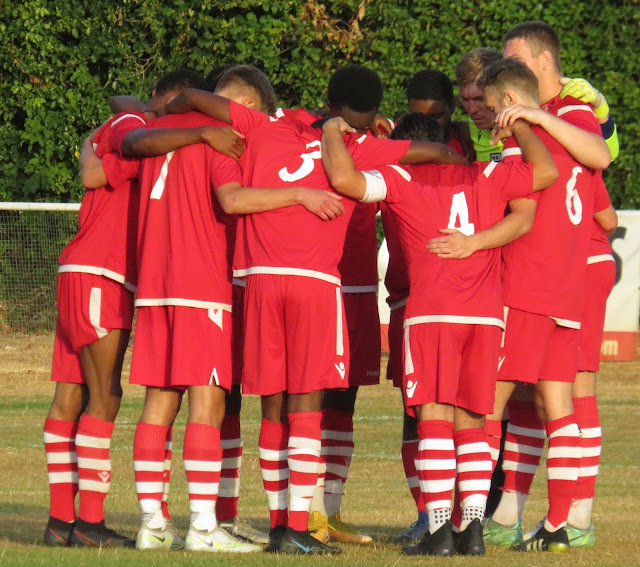 It was fantastic start to the Spartan South Midlands League Premier Division season for London Colney who recorded an impressive 0-2 win at Cockfosters.

The Blueboys finished second from bottom in the table last season and were reprieved from relegation to Step Six as the sixteen clubs who finished in this position across Step Five were rated on a points per game basis with the top twelve saved from the drop.

The home side returned to the SSMFL after a three season stay in the Essex Senior League where they had finished 9th in 21/22.

Stuart Crawford had taken over as boss of London Colney in March and there are better things hoped for the team for the forthcoming season as a new squad had been shaped over the summer with a number of promising young players brought in.

The home side are expected to go well for the 22/23 campaign with Manager Gavin Kelsey building a good squad at Chalk Lane.

Cockfosters started well with Jay Lovell marshalling the centre of their defence. They have two talented attacking wingers in Denzel Effah (former Haringey Borough youth player) and ex Cannons Wood player Cory Ugbomah who will created chances for them this season.

They had a great chance to score with a penalty early in the game but the spot kick was well saved by Norbert Kesse-Adu. The former Hillingdon Borough and North Greenford United goalkeeper had an eventful evening - He made some fantastic saves in the first half to keep his side in the game.

It was 0-1 though when London Colney Captain Ashton Henry was left with lots of space at the back post after a corner to hit the back of the net. Henry was superb at centre back throughout the game especially in the second half.

RICARDAS MILASIUS - A NAME TO LOOK OUT FOR

London Colney's number 9 Ricardas Milasius who is only seventeen years of age had a great game. He looks a real talent and what many people would call a proper centre forward. He forced Cockfoster's goalkeeper Charlie Mann to make two good saves during the second half.

Milasius played in Hendon's Under 18 team last season helping them win the Southern Counties Floodlit Youth League Delphian Division by scoring an incredible 33 goals in 19 league games. He also played for Hadley u18s in the Eastern Junior Alliance scoring 15 times in 16 league games helping them to a Middlesex FA Under 18 Cup win.

He is most definitely a name to look out for and has a big future in the game.

The visitors made it 0-2 in the second half when Pijus Montvydas curled a free kick low and around the wall from the edge of the box into the back of the net.

With twenty minutes to go Kesse-Adu was red carded (I told you he had an eventful game!) when after a free kick was lifted into the London Colney box and he was challenged by Jay Lovell the referee gave a foul to the visitors. Kesse-Adu pushed Lovell in the chest causing the former Welwyn GC, Ware and Colney Heath player to fall to the ground. The referee deemed it a red card offence and sent him off. See what you think - the footage is below.

The ten men held on to record a memorable victory and make a great start to their 22/23 campaign - On this showing their talented young squad they will hopefully go on to win more than the nine games they team managed last season.

For Cockfoster's manager Gavin Kelsey he'll be wondering what might have been had the penalty been scored or Kesse-Adu hadn't been in top form in the first half.

There was a decent crowd of 144 people at Chalk Lane for this with programmes sold out when I arrived around 30 minutes before kick off. 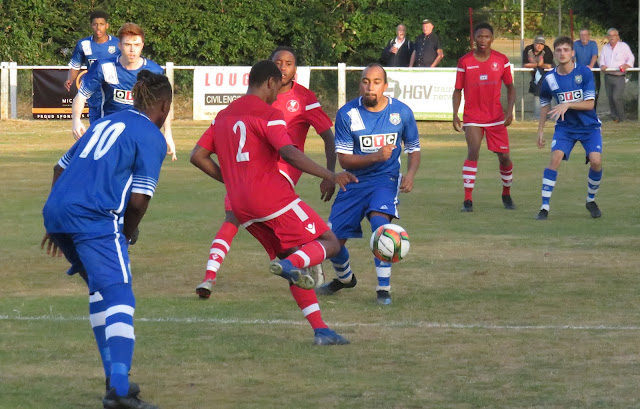 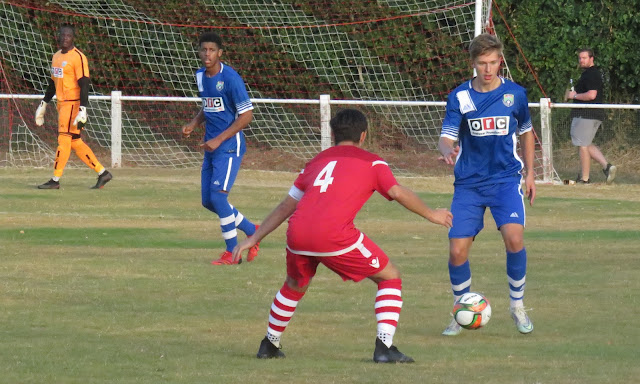 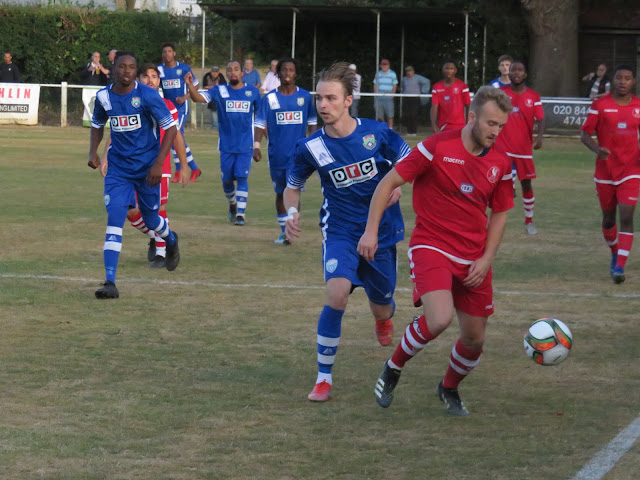 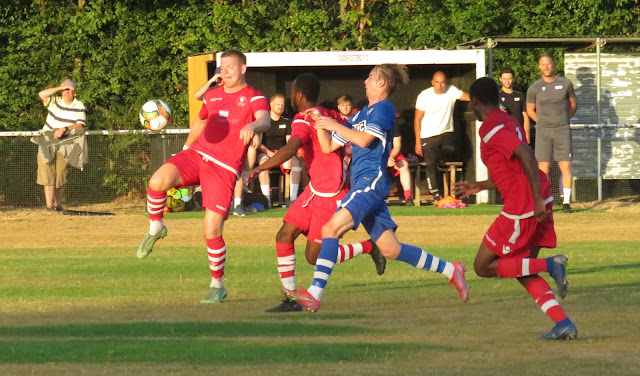 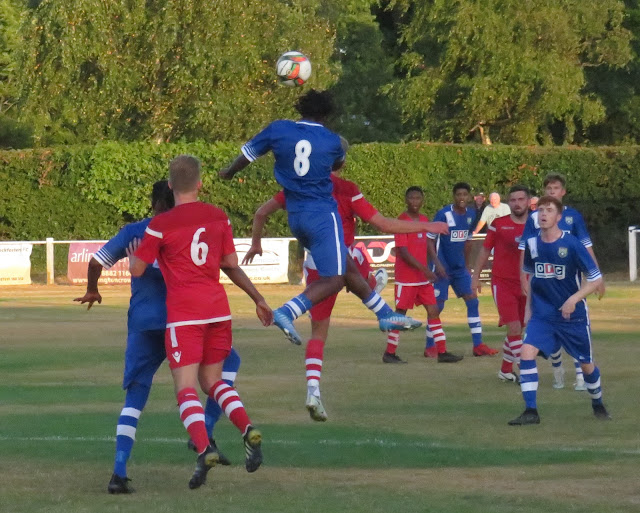 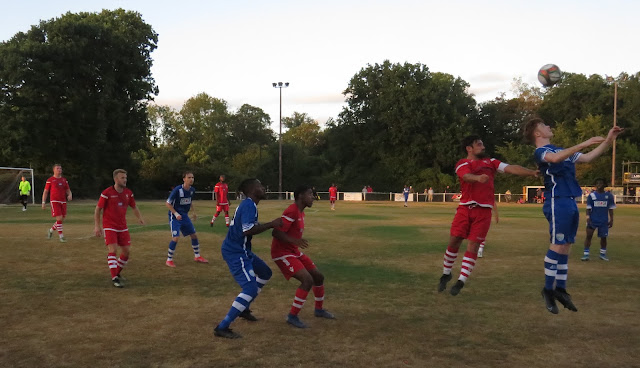