Enfield Town went through to the next round of the FA Cup today thanks to a routine 2-0 victory against SSML Premier side Leverstock Green. 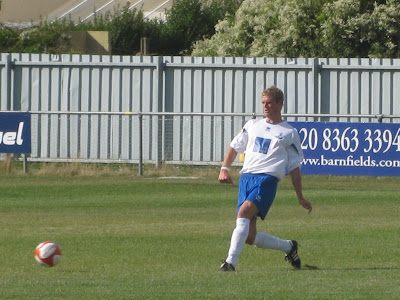 The boys from Pancake Lane had the first chance of the game in near enough the first minute when Craig Mackay made an error with a poor back pass which Jack Johnson latched onto and went one on one with Jason Holmes, Johnson sensing Cup glory fluffed his shot straight into Holmes. A let off for Town. 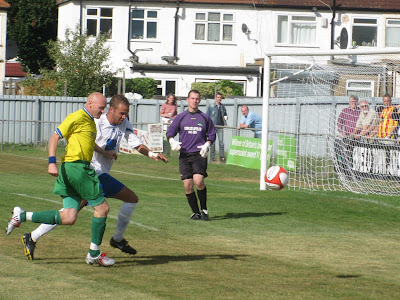 It was a fairly level affair with the fast becoming cult hero Roberto Minnitti showing some deft touches and continental flicks and tricks up front for Town with Stuart (as usual) running his socks off. Stuart had a good chance with a cross come shot which Gardner in the Leverstock goal palmed out for a corner. Billy Morgan was then rather harshly booked for a foul at the edge of the box, Fabio Valenti's free kick being blazed over.
Town took the lead when the Italian blasted home a shot from the edge of the box with Gardner having no chance in the Leverstock's goal. 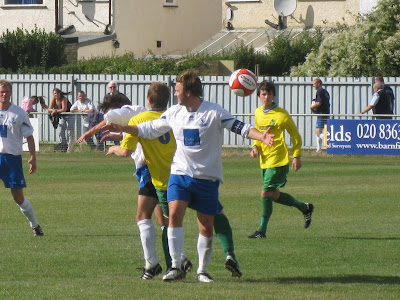 Stuart Blackburne went close with a right foot flick and the first half finished with Andy Jones being booked for a late tackle.
Leverstock had a good spell of play at the beginning of the second half with Ben Hammond looking a good player in midfield. Dales Sears was unlucky with a shot which was cleared by Town's defence. Andy Jones was then lucky to stay on the pitch with another late tackle causing the Town management to bring on Paul Marks for Town's captain before he got booked again with Rudi coming on for Minnitti a short while later.
Town made the game safe when a long range pass from Ellams at left back went to Stuart Blackburne on the right hand side, Stuart worked wonders to keep the ball in and crossed for Fabio to luckily mis kick the ball into the right hand side of the net. They all count and the game was now safe.
Leverstock thought they had a way back into the game when Hammond put through Mallisey into the box who was clipped and a fair penalty was given. The spot kick by Dan Griggs was poor and Holmes saved to his left hand side.
Overall a good victory if not spectacular. Town are through to the next round and talk on a potential run to the first round proper with away trips to Leeds, Southampton, Norwich and Charlton a possibility. There are four games to go so the cold end is not going to get carried way. It's nice to dream though. 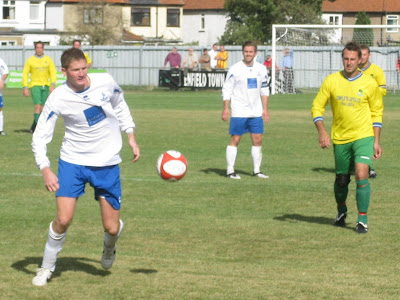 TOONSTAR TIPPER STRIKES AND THE COLD END'S RUBBISH RECORD CONTINUES.
Congratulations to the toonstar tipper whose treble of Nottingham Forest, MK Dons and Charlton came in to win him £120.23. His other treble looks on track too with only Pompey to loosed versus Man City tomorrow to win him another £58.65. Well Done!!!!
News from Toon Towers is the tipper is dinning out in some style tonight on Tandori King Prawns and due to his win he is going overboard with two lots of Keema Naan.
The Cold End (now officially the worst tipper in the world) was blown out yet again with Barnet's brilliant victory versus Notts County and and Swansea's draw versus Watford. RUBBISH!!! Will I win a bet this season....I wouldn't bet on it.
OTHER CUP RESULTS
VCD Athletic gained a 3-1 win at Corinthian Casuals so the scheduled game for Bank Holiday Monday will go ahead. Kingsbury London Tigers as predicted got a creditable draw away at Harlow Town and the local derby between Potters Bar Town and Cockfosters ended in a 1-1 stalemate. Both sides form the SSML will fancy their chances of an upset at home in midweek. Round up to follow!!!
at 17:42