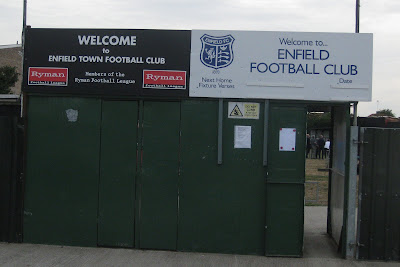 Above - The new sign that now greets visitors to the Brimmabeau

Enfield Town fielded two entirely different XI's in each half of tonight's home friendly against Ryman Premier Aveley and looked the stronger side over the full 90 minutes creating a number of good opportunities which can only be encouraging for when the real things starts in a few weeks time.

After Aveley brushed the outside of Miles Duffy's right hand post with a deflected shot it was Town who took control of the game with Jordon Lockie's pinpoint cross to Liam Hope who unluckily headed over the bar.

Phil Kane, at left back, had a great game in the first half linking up well with Sam Byfield on the left wing but it was an attack down the right which made Town's first goal. Fabio Valenti won the ball back off an Aveley player and quickly moved it onto Hope on the right hand side who ran forward and passed the ball back into Valenti's overlapping run who then crossed for Sam Byfield to shoot from just inside the edge of the box and score with his right foot.

Town made it 2-0 when a through ball by Kane beat the offside trap and despite noisy industrial appeals from the Aveley back four Bryan Hammat layed the ball unselfishly across to Hope who easily passed the ball into the net.

Aveley scored just prior to the break with what was easily the best goal of the game (and guess what - the cold end missed it on camera!!) when an unstoppable bullet of a shot went straight into the left hand corner of Duffy's net.

The cold end and many Town fan's have noted that Lee Protheroe, playing at centre back, has brought with him something you can't beat and you can't buy - Experience! Lee looks a good acquisition for the forthcoming campaign.

Town had chances to make the game safe with Jay Siva putting in another sterling shift on the left wing with Deniz Mehmet and Scott Buckeridge working hard up front to create space and opportunities. Buckeridge, formerly of Brentford and CD Javea in Spain (33 games and 7 goals scored), was particularly unlucky when seeing his header from Ben Hammond's cross rattle back off the crossbar late on in the game.

Aveley scored late on to make it all square.