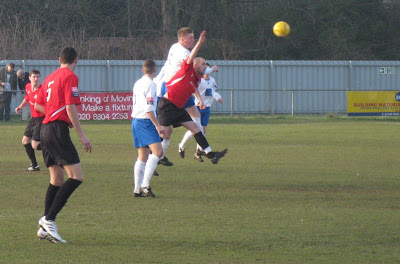 Rover's manager Iain O'Connell turned from an angry man at half time to a very happy man at full time as his team down to ten men following Adam Bailey-Dennis's sending off fought back to take all three points to put an end to Town's unbeaten run yesterday.

It all started brilliantly for Rovers as they caught Town asleep in the third minute when a after a short corner a looping cross from the left hand side found centre-back Nikki Beale who had crept in unmarked at the back post who volleyed the ball home past Rob Blackburne to make it 0-1. 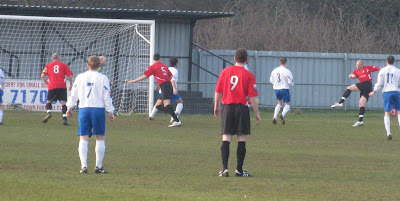 From then on it was all Town as the trickery and skill of Byfield and Hammond on the wings combined with the hold play play and pace of Hope and Wallace up front caused the Rover's back four all sorts of problems. Michael Bardle also got forward form his left back position and it was he who got Town's first chance with a nice shot which was well saved by Louis Godwin-Green in the Rover's goal. Louis is very familiar to Town fans having played against us many time before for Rovers, Concord Rangers and Southend Manor amongst others.

Ben Hammond then put a lovely through for Wallace whose shot was just off target to Godwin-Green's right hand side post. 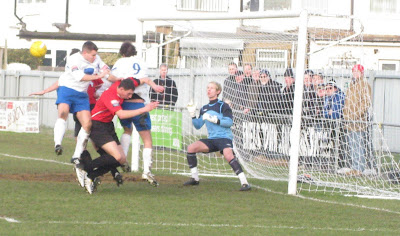 Gunz was working very hard as usual and he looped a cross-cum-shot in from the left hand side which was headed over from under the cross bar by very tall centre back Adam Bailey-Dennis. This was the start of a nightmare half for Bailey-Dennis who is playing on loan at Rovers from Blue Square South Braintree Town. The resulting corner was put in by Rudi Hall to the far post and somewhere in a tangle of player's Bailey-Dennis hand balled causing referee Shaun Scott to blow up for a penalty. Despite a handball in the box the official didn't show a yellow or red card to the defender. 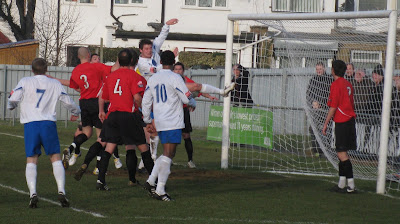 Somewhere in the tangle of player's was a handball

Rudi Hall stepped up to put the kick confidently into the net to Godwin-Green's left hand side to make it 1-1.

Rover's midfielder Jimmy Webb then got in down the other end and put a good shot in across the goal which very nearly went into the top corner.

This was a very rare attack for the away side and it was Town who were going forward at will, following some very neat interchange play between Paul Marks and Liam Hope on the edge of the box Liam was unlucky to see his shot go straight at Godwin-Green.

Adam Wallace was then tackled by Stuart Judd to the right hand side of the box who appeared to make contact with the Town forward causing the assistant referee to flag for a penalty and referee Scott to blow up and point towards the penalty spot for a second time. This incensed the Rover's players who berated the officials for what they thought was an unfair and unjust decision. Some supporters thought that Judd got the ball and some thought he did trip and make contact with Wallace as well as get the ball, it was one of those incidents which you've seen given and at times not given. Nikki Beale got himself booked for dissent during the aftermath with Judd escaping unpunished. 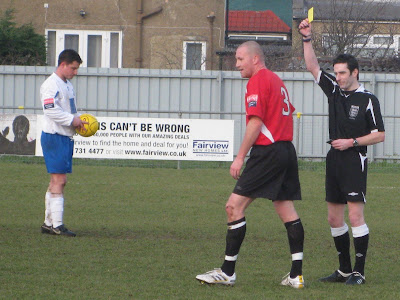 Up stepped Rudi with a carbon copy of the first spot kick he made it 2-1 to the Town.

Despite Town's brilliant attacking play there were warning signs of what was to come later on when Rover's top scorer Neil Richmond got into the box unmarked only for some very impressive tracking back by Hammond snuffed out his goal opportunity. 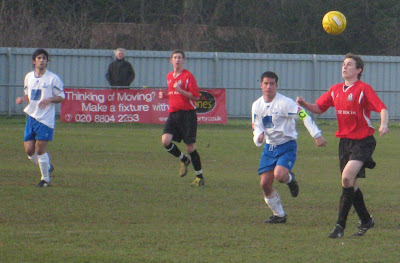 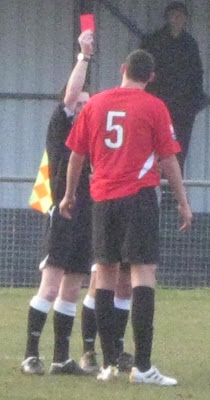 This was when the talking point of an already action packed half took place. Paul Marks was injured on the floor with Bailey-Dennis standing over him. Most Town fans had took their attention to Liam Hope who was breaking forward in yet another Town attack only for the referee to blow up as the Rover's defender had appeared to leave his foot in and apparently stamp on Marks who was still on the floor. This altercation caused a slight melee between the player's and both linesmen to run onto the pitch and after consultation with the referee Bailey-Dennis was shown a straight red-card. Whilst walking towards an early-bath the Rover's defender smashed the corner flag down to the floor ala Wayne Rooney for Manchester United when he was given his marching orders versus Fulham last season. Paul Marks was shown a yellow card for his part in the incident taking him to 10 bookings which means he will miss the game at Ware on Tuesday night. 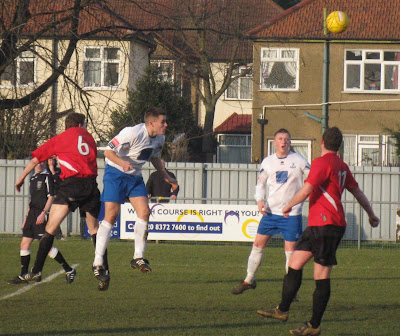 Apart from Rover's 3rd minute goal and one or two sporadic attacks the half had belonged to Town who had put in some very impressive attacking play creating numerous chances. It was only through luck Rover's were only 2-1 down. Wallce, Hope, Hammond and Byfield had played very well as had Marks in midfield and full backs Lockie and Bardle coming forward. Any attacks that Rovers had had were quickly dealt with by Town centre backs McKay and Kirby, Kirby in particular was having a great match. 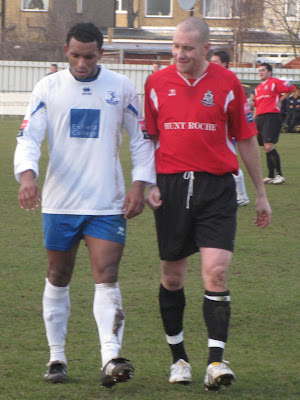 Adam Wallace and Nikki Beale battled against each other throughout the match.

Rover's manager Iain O'Connell really made his feelings felt to the officials as they walked off at half-time. He appeared not very happy. 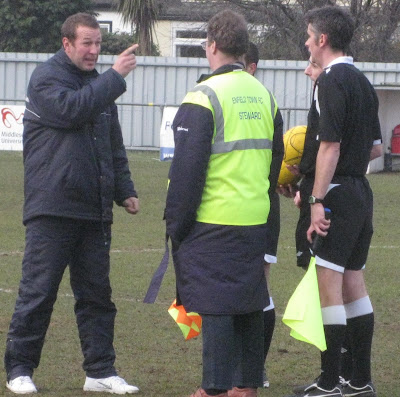 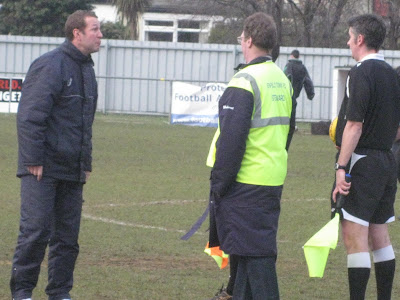 The second half started and it was Town who came forward eager to put the game out of sight against the 10 men of Great Wakering. After a 'junior' corner from Rudi Mark Kirby was unlucky to sky his shot over the bar.

Rudi Hall then found Gunz who beat Beale with a fantastic run down the right hand side to put a cross into Hope who was unlucky at the near-post under pressure from a Rover's defender.

Rover's showed even with 10 men they were still capable of an attack and it was then that the game seemed to change with a header from Dan Trenkell following a driven ball in from the right hand side, Rob Blackburne easily saved the header but it was soon to be 2-2. 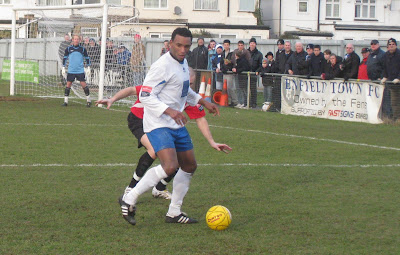 Jordan Lockie appeared to slip in the box allowing Richmond in to round Blackburne and finish easy to make the game all square.

It got even worse as a big long clearance up field caused Craig McKay to not get enough on his header back to Blackburne. Richmond nipped in again to make it 2-3.

Stuart Blackburne was introduced to the game coming on for Ben Hammond but it all seemed to go wrong. Town who had looked so impressive were now putting in stray passes and not creating any clear cut chances. Dan Trenkell in the centre of midfield had put in a great performance in the second half looking strong on the ball and pulling the strings for most of Rover's forward play.

The experienced Rover's centre back pairing of Nikki Beale and Steve Heffer (ex of Boreham Wood, Dag & Red, Thurrock, Billericay Town and Brentwood) closed the game out very well with Rover's visibly sitting back and it appeared they had the extra man for the last 10 minutes of the game. 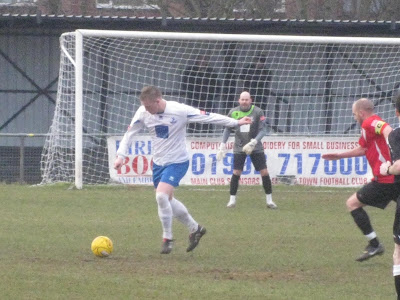 The full-time whistle blew to the delight of O'Connell in the Rover's dugout who completed his transformation from angry to happy man.

All in all a very frustrating afternoon as for all of Town's attacking play it was the two mistakes in letting in the class of Neil Richmond which gave the game away. It was a fantastic game to watch for the neutral and it was nice to see both sets of players receiving a round of applause from Town fans as they left the pitch. 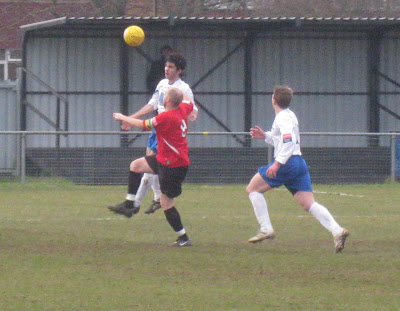 We can't win every game and it is still encouraging to see we are creating so many chances. It's onto to Ware on Tuesday now who will be full of confidence following their fantastic 2-3 win at Lowestoft Town.

The cold end Town man of match - Mark Kirby for his display in the first half.