The Spartan South Midlands League produced yet another highly entertaining game last night when in Division One it was third v second at Lowfield. Hoddesdon Town welcomed Ampthill Town in a game that had been highly anticipated by supporters of both sides. Ampthill's league form going into the game read DWWWWWDW with Hoddy's equally impressive reading DWWWWWWWL.

Ampthill started well and had the ball in the net after some early pressure but the goal was ruled out for offside. Their number 9 Tyrone Taylor showed some good touches and headed the ball on numerous occasions during the game, He also possess a huge throw-in which the visitors used several times but the Hoddy back line performed well all night. Tom Massey in the centre of defence had a great game along with midfielder Barrington Brotherton who sat in front of the back four and worked hard throughout the 90 minutes.

Hoddy scored all their three goals in the first half via a brace from Dean Barker and a fantastic goal from Jamie Brandon just prior to half time. His outside of the boot strike from outside of the box would be replayed all over the TV if a Rooney or Robin Van Persie had of scored it!!

Ampthill showed some decent play in the second half trying to get back into the game but found Hoddy at their very best in all departments. Goalkeeper Kieron Extence made two really good saves towards the end of the game.

What was refreshing to see was Ampthill's manager Craig Bicknell telling his player's to 'get off the ref's back, stop whinging and play the game' when his team started to question the official after a few borderline decisions. Good to see!!
STARTING XI's 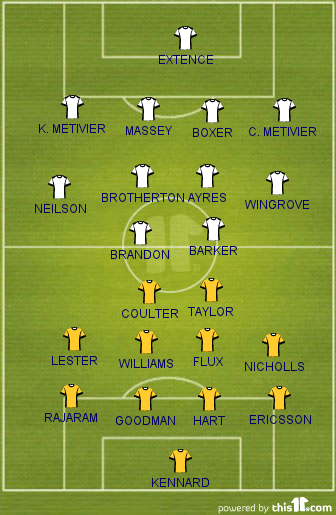 
As you can see from the below league table it was really was a must win match for Hoddesdon Town to still be in with a shout for promotion. Only the top two teams go up to the Premier Division so it's still looking good for Ampthill Town (as they have four games in hand over Hoddy) and table topper's London Colney.