GOALLESS ON A WET WEEKDAY NIGHT IN WORMLEY

ATHLETIC NEWHAM travelled to WORMLEY ROVERS last night for a Thurlow Nunn First Division (South) game which at times was played out in rainy horrible conditions.

The visitors who have been renamed from Lopes Tavares Football Club over the summer to represent the London borough they play in have made a decent start to the 20/21 campaign winning three and drawing two of their league games prior to kick off last night. All had been played away from their Terence McMillan home - they only home game was against Wormley Rovers in the FA Vase which the ended 0-1 thanks to a Kane Lowe goal.

As well as the Vase victory which gave them an away tie at Essex Senior League side Hashtag United (scheduled for this Saturday) Rovers had won three and lost two of their league games up until yesterday's game.

Wormley had lots of possession in the early part of the game but Athletic came back into it towards the half time break looking dangerous at times especially with a close range header which was palmed away by the home keeper.

In difficult soggy conditions due to the rain neither side had many chances to score in the second half as defences were on top - the game ended 0-0.

Athletic entertain Harwich and Parkeston on Saturday in the league with Wormley traveling to Hashtag United as previously mentioned.

Since The Cold End's last visit to Wormley Rovers in 2018 the club have made some ground improvements with a new seated stand behind the dug-outs with what was the main stand moved around behind the far goal. It's fantastic to see a local club making progress both on and off the pitch. 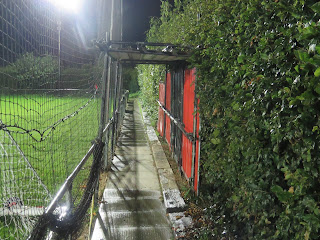 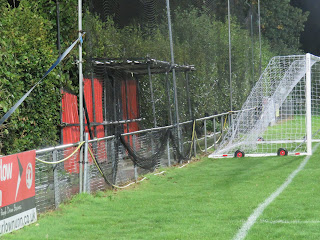 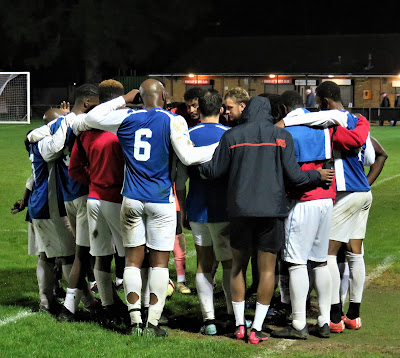 ATHLETIC NEWHAM GATHER FOR A TEAM-TALK AT THE END OF THE GAME
at 19:32