PROPER SOCCER IS BACK WITH A TRIP TO THE ARMADILLO STADIUM

The cold end banished all those depressing thoughts of England's dismal showing at the World Cup by returning to watching real football and the beautiful game live tonight at the ground formerly known as The Raj Vouge Stadium and The Chaateau Roux Stadium. Zamaretto League sides Hemel Hempstead Town and Arlesey Town faced each other in a friendly match.

- The Tudor Army gather on the Arlesey Kop
The visiting Tudors will play the 2010/11 season in the Premier Division with the hosts playing in Division One Central. This was Arlesey's first home friendly game played this season having faced AFC Dunstable away on Saturday with Colin Payne's team starting with a 0-0 draw against SSML side and local-rivals Leverstock Green also last Saturday. 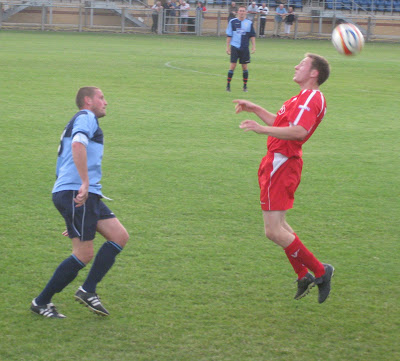 Hemel started the brighter team and were cheered on by a handful of loyal travelling fans standing on the Arlesey Kop. Aston Goss on the left wing showed some nice skill and good pace to put over a number of impressive crosses. He also worked hard to track back helping out on the left side of defence a number of times during the first half. Easily rated as the cold end man of the match on his first half showing. 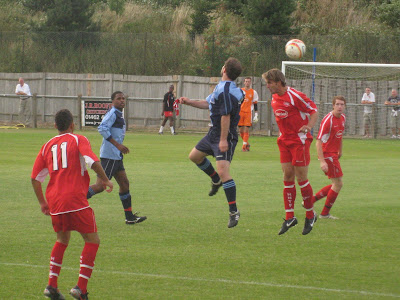 The game was one of few chances with the home keeper looking confident in punching a number of crosses out and imposing himself by claiming most of the balls that were put over.

Arlesey took the lead just prior to the break when a defensive mix up let in Harry Hunt (who played under Payne at Hitchin last season) to chip the ball into the net with what was the home side's only real chance of the half.

In typical pre-season friendly fashion the second period saw both managers bringing on a number of substitutes with a quadruple change coming from the home bench with about 30 minutes left. 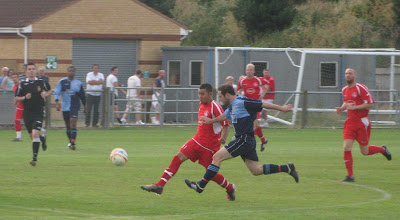 Hemel looked for an equaliser having a few half chances but despite looking the better side going forward they never really threatened the home goal in the last half an hour. 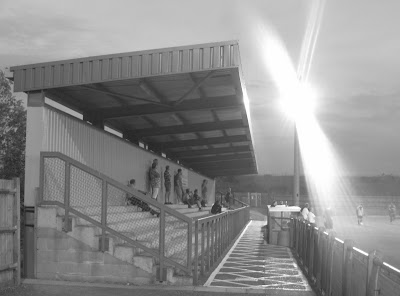 - Football returns with the cold end going all black and white for this shot of the crowd gathered in the far stand at Arlesey tonight.