PLAY OFF CHASING ROCKS AND TOWN SHARE THE SPOILS 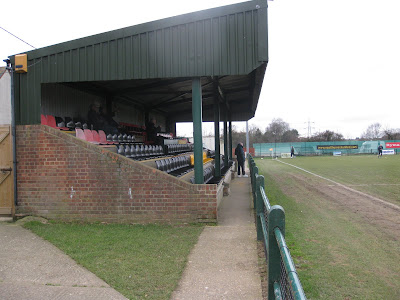 The main stand at Rookery Hill

Town played out their first competitive goalless draw since April 5th 2008 at Rookery Hill today. Most supporters would of taken a point before the game against a very strong East Thurrock United side who have only lost 3 times at home in the league
this season. 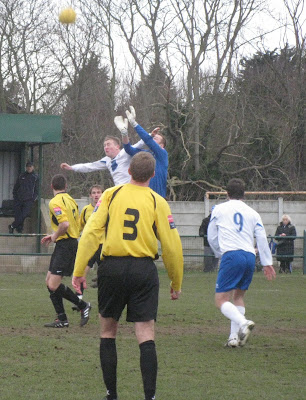 Mark Kirby goes up for a challenge with Richard Wray

The Rocks had the better chances of the first half played in front of 207, their highest home league crowd of the season so far. After 15 minutes speedy right winger Kye Ruel missed a great opportunity to put his side 1 up when his shot when one-on-one with Rob Blackburne (who done extremely well to close down the player and ball to put him off enough) went wide of the post. 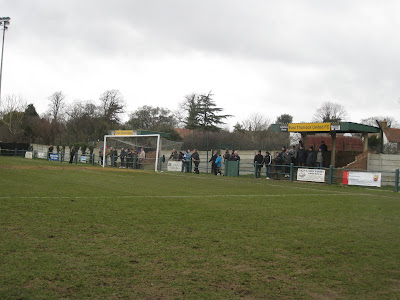 League top scorer Sammy Higgins then had a shot on target from the edge of the box which was brilliantly saved by Blackburne's dive and block which pushed the ball around the post and out for a corner. The ex AFC Hornchurch marksman has now gone 3 games without a goal. 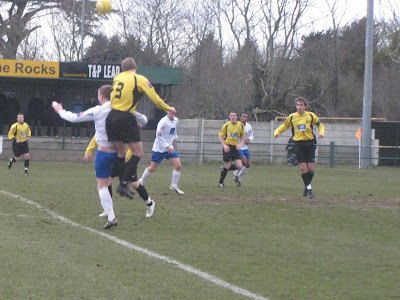 Town got their first real chance after about 20 minutes when a cross from Ben Hammond on the right hand side found Adam Wallace in acres of space in the centre of the box with only Richard Wray in the Rocks goal to beat. However, Adam seemed to get the ball under his feet and the sand in the goalmouth and his shot was easily saved. This seemed the only time when the Rocks back line gave Adam space on the ball when inside the box. 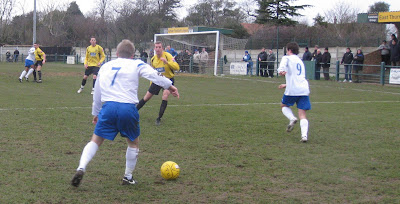 Craig McKay in the Town defence then appeared lucky not to be spoken to by the referee when going in late on Rocks midfielder Kris Newby. Newby was booked after the referee had spoken to his assistant for presumably dissent as to book him for diving would of been very harsh.

It was all very tight and no team seemed to create any clear cut chances for the rest of the half. Richard Wray was booked for simulation after going down like he'd been shot by sniper directly in front of the referee complaining he'd been pushed by a Town player. 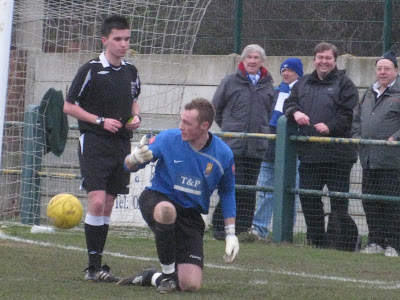 Town had a very legitimate penalty claim in the dying moments of the half when Paul Marks appeared to be held onto and brought down by Wray inside the box. From what the crowd could see including the Rocks supporters all thought this was a genuine shout for a spot kick. 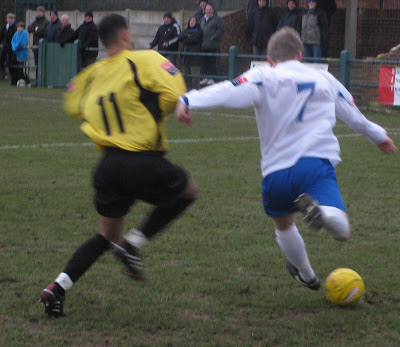 The only other talking point of the half was when a well known Town fan lent over the fence eager to help to give the ball back to get the game going again....He was a bit too eager and ended up going head over heels over the fence much to the amusement of the Town faithful. 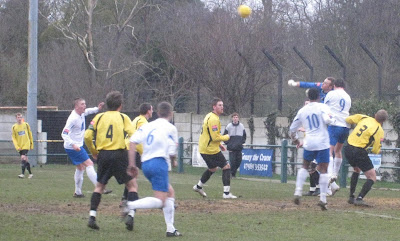 Liam Hope had the first chance of the second half when he rounded the keeper inside the box and couldn't get a shot in on time due to some good defending by East Thurrock.

Kris Newby then clipped Michael Bardle's heels as he broke from defence and received a second yellow card and in turn a red card to reduce the home side to 10 men for the last 30 minutes of so. The Town left-back had put in a good performance with some good defending and speedy runs up the wing.

There were few chances from open play to to make it a victory with a Sam Byfield shot from outside of the box which went agonisingly wide of the post standing out.

Steve and Del introduced Stuart Blackburne on for Liam Hope but East Thurrock's back four didn't allow Stuart an inch causing him to have no chances of note.

Fellow substitute Fabio Valenti had the last chance of the match and probably Town's best one with the last kick of the game. Stuart had been fouled on the edge of the box with Valenti's deflected free kick excellently saved by Wray in the Thurrock goal to keep it 0-0 and the points shared. 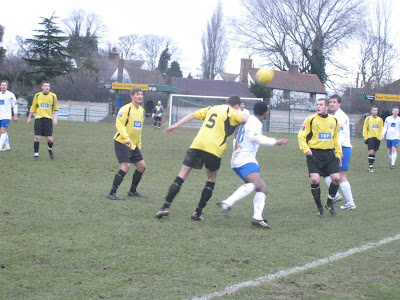 All in all both team's defended well and a draw was probably a fair result. A clean sheet against the 2nd top scorers in the league allowing them only 2 or 3 clear chances is very positive after Tuesday's first half performance at Ware. 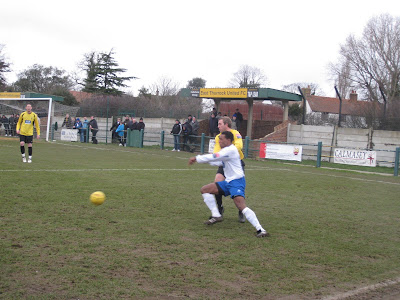 Adam Wallace battle's for the ball

The cold end man of the match today is a close call between Jordan Lockie and Rob Blackburne. Lockie put in another impressive performance at right back with a well timed tackle in the box on East Thurrock forward Sam Berry in the second half standing out. Rob made a great save in the first half to deny Higgins his only clear cut chance of the match.

The attendance of 207 was close to the 232 people who turned up at local Blue Square Premier side Grays Athletic and 238 at another near-by game, Thurrock V St Albans City game from the Blue Sqaure South.

HEADER AND SUBSEQUENT SHOT PUT OVER THE BAR


IT'S JUST LIKE WATCHING BRAZIL!!! MICHAEL BARDLE SKILL! WITH A NICE FORWARD RUN INTO THE BOX BY SAM BYFIELD