This Macron Southern Counties East League Challenge Cup Round Two game was a thrilling game between two good teams. In league table terms this pitted bottom of the table Fisher FC against third placed title challenger's Sheppey United so the away side were strong favourites to go through.

Off the pitch it's been an amazing season already for The Fish as they celebrate moving the beautiful game back to their spiritual home in Rotherhithe. The St Pauls Sports Ground is 100 yards across Salter Road from the former Surrey Docks Stadium home of Fisher Athletic (see TheColdEnd article from 2010 here) which was left by the old club in 2004. It stood derelict for a number of years and is now a green area with flats and apartments overlooking it - one of the road's is aptly named 'Fisher Close'. 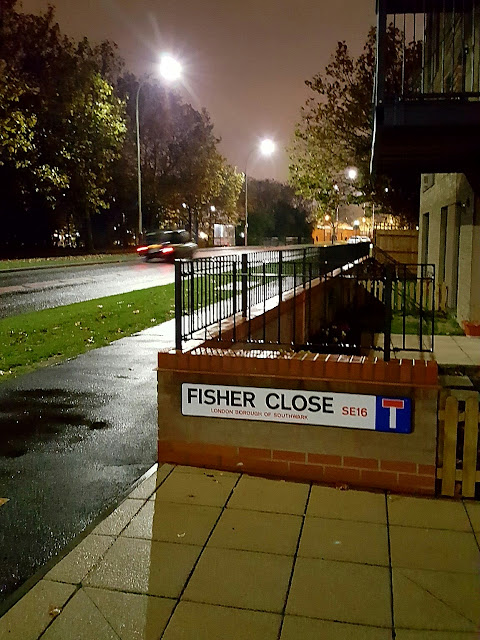 Fisher FC are currently managed by non-league legend Gary Abbott who, with me being a fan of the old Enfield FC, brought back many happy memories seeing him instruct his young side from the dug-out. I still think had Gary not been (somewhat harshly) sent off in Enfield FC's famous 0-1 victory at then football league side Torquay United we would of given Premier League side Leicester City a much tougher game at Filbert Street - we lost 2-0 on the day and he was suspended.


The Ites are a club on the up as I reported on TheColdEnd a few weeks ago. They came second in the final Kent Invicta League last season and were promoted to the SCEFL Premier Division - it merged with the SCEFL to become Division One of the league over the summer.

The new stadium has a seated stand and a covered stand behind one goal along with a small club house - It will probably be one of the most photographed grounds this season as lots of ground-hoppers and football fans visit. You can see the top of the office blocks in Canary Wharf across the River Thames although for some of this game they were covered with clouds as it was a rather overcast rainy evening.

The Ites were the better side over the first 25 minutes playing some decent football and took a 0-2 lead via Lee Friend and Dan Bradshaw. Credit to The Fish who also looked very good with pace going forward and they were rewarded when Trey Williams scored and midfielder Isa Hussein who played very well in the centre of midfield scored a superb free-kick - Had, for example, Lionel Messi scored such a great goal it would of been replayed and retweeted hundreds of thousands of times! It's well worth a look at on the below highlights. Ironically the former Canvey Island player has worked as the Barcelona and Argentina superstar's body double on a number of advertisements. (see the free kick on the video below from 3m 45s)

Fisher's young goalkeeper Ricky Wadman, 20, kept his team in the game with a number of impressive saves as Sheppey went forward backed a good number of travelling fans who had made the journey from the Island. Bradshaw headed their third goal after a sustained amount of pressure before Hussein made it two world class free kicks in one game to make it 3-3. (see the free kick from 10m 45s)

Sheppey made it 3-4 when Bradshaw completed his hat-trick with a close range header after Wadman, who had come out on the left hand side of his box, was beaten by Friend who crossed the ball in.

WAS IT THE GOAL THAT NEVER WAS?

There was also the goal that never was as Sheppey did "score" another - my goal line technology isn't as good as in the Premier League but it shows the ball crossed the line or does it?  I have looked at it and still can't make my mind up - One of the their players did say it was about a foot over the line which from the still picture you can see if it was it was a matter of centimeters?? (the replay is from 9m 45s)


In the league The Fish are five points adrift at the foot at the table with Beckenham Town, Bearsted and Tunbridge Wells all on 12 points above them. Gary Abbott locked his side in the changing rooms for a long period after the game - From what I saw last night I think they can push on and move on upwards away from the relegation zone over the next few months. It was good to see their fans in the crowd of 113 backing their team throughout. It doesn't get any easier for them as current table topper's Ashford United visit on Saturday for a bottom v top clash - What better game to start their move up the table!


Sheppey United take another trip to South London on Saturday to face Erith Town in a league game - I expect them to be playing Ryman League football sooner rather than later - The title race looks an exciting one with their main rival's being Ashford United, AFC Croydon Athletic, Crowborough Athletic, Sevenoaks Town and Hollands & Blair.

There is a great in-depth report on the game on the excellent Kentish football which you can find here with quotes from Fisher manager Gary Abbott and The Ite's boss Ernie Batten.

If you are looking to visit Fisher's new St Paul's stadium it is very easy to get to on public transport. Turn right out of Rotherhithe station and it's an approximately ten minute walk. Rotherhithe back to Highbury and Islington took around fifteen minutes through Whitechapel, Shoreditch and Dalston.
at 18:13