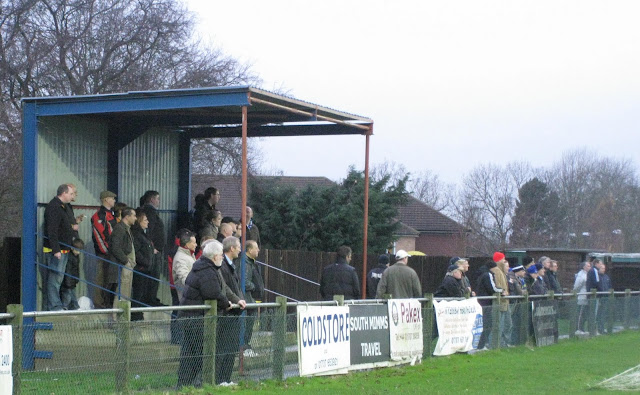 The game at Potters Bar Town yesterday will be remembered for all the wrong reasons but also the heroic performance from the nine men of Enfield Town in the second half.

Both Walid Matata and Mark Kirby were given straight red cards just prior to half time as what had been a largely uneventful game boiled over between the two local rivals.

The cold end had my four year old boy with me yesterday so juggling the camera and keeping an eye on him was difficult to say the least. Therefore, their is only a ultra-small highlights package for you to view.

Walid's red card came after a foul was given against him when The Scholar's right back Ashley Harrison Barker grabbed his shirt. Potters Bar's midfielder Josh Urquhart then went to clear the ball and caught Walid with the kick. Walid's reaction was to raise his hand and cuff him in the face. (see the video for the replay as this was the only real piece of action I got all afternoon). Urquhart fell to the floor and it then appeared Rob Magwood and Walid went face-to-face/head-to-head with other players pushing and shoving.  Walid was red-carded and Magwood received a yellow card for his part in the incident. What is interesting is that looking at the replay it appears the referee didn't see the initial incident and it was only after consultation with his assistant who presumably saw Walid raise his hand that the red card was given. In all his games for Enfield Town I've never seen Walid react like this and he is clearly not this sort of player or person. It looks as though it was a rush of blood/moment of madness from Walid. 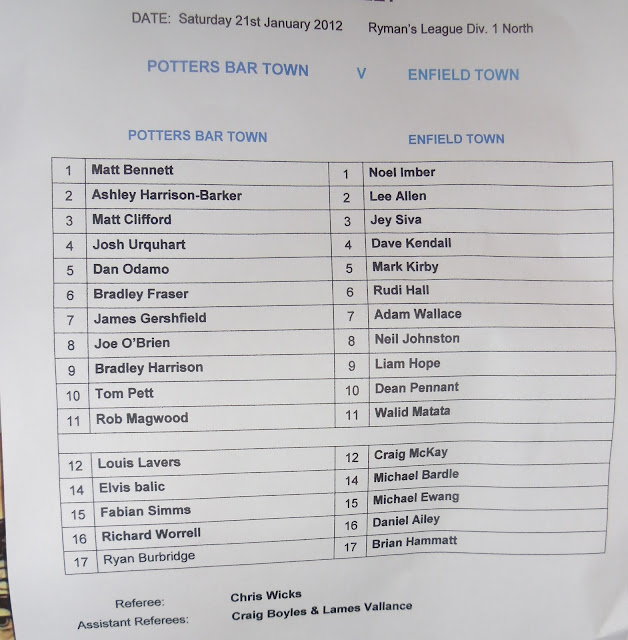 In the cold end's opinion it was after this controversial incident that some of the Enfield Town fans present (only a small percentage) really let themselves down and tarnished the good name of the club by shouting and swearing abuse at the referee, who had relied on his assistant seeing the incident to give the red card, was now being called all sorts. As I have stated before I accept (whether it's right or wrong?) that swearing is part of the game from Premier League down to our grassroots level but some people crossed the line yesterday and in my humble opinion this behaviour was wrong.

I didn't agree with some of the decisions the officials made throughout the 90 minutes (what football fan does??) but I also don't agree with the verbal abuse of the officials either. Banter is good...over the top effing and blinding is not!! It does our football club no favours whatsoever. Thankfully, this doesn't happen all the time.

To make matter's worse for the 10 men of town Mark Kirby was red carded just prior to the break when apparently after receiving some verbal abuse from a member of the crowd he reacted and gave some back.

The second half was a fantastic performance from Enfield Town with Michael Bardle and Craig McKay coming on for Liam Hope and Jey Siva - In spells Town really did look like the better side even with only nine men. Adam Wallace was the lone man up front and absolutely ran his socks off in a man of the match performance of heroic proportions.

The cold end was impressed by Potters Bar's big centre back Bradley Fraser who had a very decent game. Fraser came through the youth system at Boreham Wood and has also played for Ryman Premier Hendon. He looks a very good player who is strong in the air and also confident on the ball.

Here is the footage from the game featuring Liam Hope's chance in the first half and Walid's sending off. Unfortunately I pressed stop before I could capture the aftermath of the incident.