THE DOCKERS DEFEND TO PUT A DENT IN TOWN'S NEW YEAR

It’s confession time on New Year’s Day for the cold end - as after the referee blew the final whistle at Chadfields yesterday my immediate reaction was to say Enfield Town didn’t deserve to win the game that Tilbury edged by a score of 2-1. I think I was just annoyed that Town had had so much of the possession and created so many chances but still not got anything for the game.


Taking nothing away from The Dockers who are a hard working and impressive side, they played really well at the back and defended heroically at times clearing shots of the line on a number of occasions.  When the home side’s defence was breached it was down to their experienced goalkeeper James Marrable to keep the ball out of the net, He made a good number of saves.
On a very heavy pitch that was sanded in places it was a highly entertaining game and a great advert for the Ryman League.


But for two defensive lapses including a “controversial “second goal from Tilbury (which all the Town player’s called for offside for....most of the Town travelling fans were down the other end so we can’t say 100% if the player was off or on) I am sure the Town would of at least got a draw if not won the game.
Another talking point came in the opening moments when Neil Johnston (who put in an impressive performance) received the ball on the right hand side of Tilbury’s penalty box only to be shoved off the ball by Tilbury Defender. Was it a foul??   Have a look on the video from 00:05secs.

As I’ve stated above take nothing away from the Tilbury side....I don’t want this to sound like a fan of football club complaining that the best side lost etc. The Dockers worked hard and took their chances so fair play to them.  This win puts them back up into the play off places so they too are in contention for promotion this season. The cold end was impressed by Emiel Aiken on the left hand side of midfield and as mentioned James Marrable. Gary Henty (who scored that wonder goal at Theobalds Lane in August), playing in midfield, also had a good game for the home side.

For the Town I lost count how many headers Rudi Hall won in midfield and Liam Hope was very unlucky not to carry on his scoring run.

The last mention must go to Walid Matata’s spectacular overhead kick which is surely in the top three contenders for Enfield Town goal of the season. 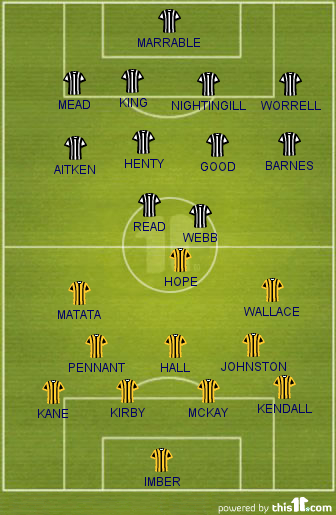