TOWN BACK TO WINNING WAYS AGAINST THE MOTORMEN

Enfield Town kicked off 2012 with a good 3-0 victory over a Redbridge side that were unlucky not to score in the first half at the Queen Elizabeth II Stadium yesterday. Town took an early lead through Jon Moore (which I missed on camera) but from then on it was the visiting Motormen who were the better side in first period.


They created a number of good chances with the ball drifting across Town’s goal-line with no players quick enough to get on the end of the crosses.  Their number 9 Joe Gardner (formerly of Great Wakering Rovers and Brentwood Town) worked really hard and was full of running up front.  Redbridge played 4-4-2 but noticeably changed to 4-2-4 when their keeper Joe Wright had the ball kicking it up-field quickly with Nathan Gordon and Ben Bradbury pushing further up on the wings. 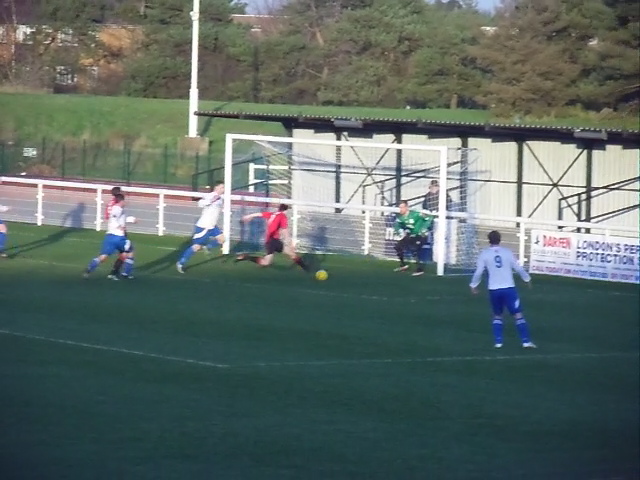 They also have within their ranks the Ryman League’s answer to Rory Delap in Billy Sendall who was playing at centre-back yesterday. Sendall’s dangerous long throws were well dealt with by a combination of Mark Kirby, Dave Kendall and Noel Imber. I’m not sure if Sendall was injured as in the second half he stopped taking the throws.
To use a well worn football cliché this was a game of two halves as Town were much the better side in the second 45 minutes. Midfielder Neil Johnston put in another stand-out performance and scored Town’s second goal after being set-up by a piece of unselfish play by Liam Hope. Jey Siva at left-back also played well defending against a pacey Nathan Gordon and then bringing the ball forward.

Town rounded off the game with a third goal scored via Leon Osei or Liam Hope???? Did Osei ‘s free kick from the right hand side corner go straight in or was it just faintly touched by Liam??  (See the video from 6mins 10secs)Liam has told the cold end he is happy to give it to Leon so he doesn’t end up with more red cards than goals this season.