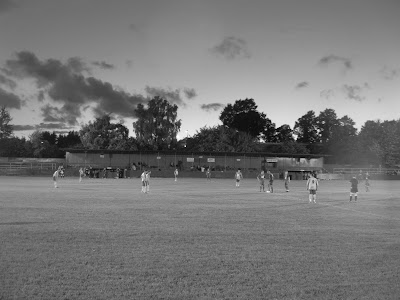 Above - Monday night football at Oakside - where else would you want to be??

The Airportmen edged out Barkingside by the odd goal in five in this Essex Senior League Cup Group E game. The first half was one lacking any real goalmouth action with Barkingside playing a better passing style of football but not troubling Richard Mann in goal for Stansted. Their best chance came when T.Jaques out battled a Stansted player for the ball to lay the ball inviting across the face of goal but none of his team mates took advantage. The visitors had a more direct style of play relying on set pieces and the long throw of right back B.Sendall who had a good game for them. Ryan Murray playing as a centre forward target man also had a impressive game for Stansted. 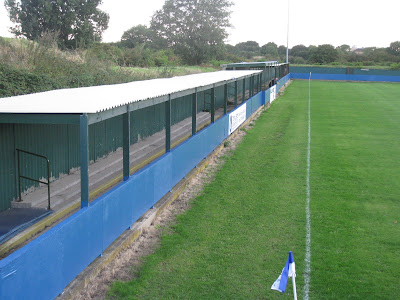 Above - The covered stand which runs down one side of Oakside

It was brilliant to see the ex Leyton player Perry Burns in the home line up, who Enfield Town fans will know well as he suffered a horrific leg break in the abandoned game at Lea Bridge Road last season. Burns switched from the left to the right hand side of midfield and vice versa throughout the match and his running with the ball was a constant menace to the Stansted back line. Bradley Falco was captain of Barkingside who also played for Leyton against Enfield Town in January of last season.

Stansted went 0-1 up with the only real chance of the half (apart from Burn's shot on the volley from outside of the box which stung the hands of Mann) when R.Olivia lofted the ball over the home side's defence and into the box for Andy Oxby to slot home past D.Morris-Saunder's near post.

The second half was much improved in terms of goalmouth action than the first with Barkingside attacking from the off looking for an equaliser. It didn't take long as S.Bunce's long rang shot nearly caught out Mann who dived well to push the ball out for a corner. From the resulting corner kick it was Perry Burns who put the ball into the back of the net to make the game all square. 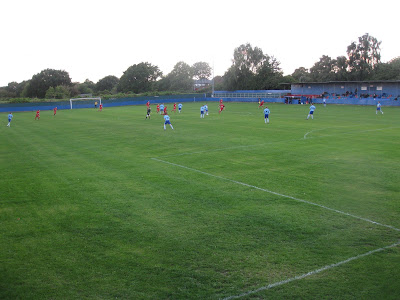 Stansted re-took the lead when under pressure from an on running player a Barkingside defender attempted to clear the ball only to see it loop unfortunately into the back of his own net. Barkingside kept fighting and pulled level about 10 minutes later when Joe McAvey's deflected shot hit the back of the net.

The game was won from the penalty spot. From the replay it looks as if the Barkingside player got a touch on the ball but the referee pointed towards the spot despite loud protests from the home players. The cold end has always been a supporter of the respect campaign (without the man or woman in the middle their would be no game to play or watch) so to be fair to the referee he only had one quick look at the incident and gave a penalty kick.

Substitute John Bricknell converted the penalty kick to make the score 2-3 and seal the victory for the away side.

The pitch at Oakside was in a fantastic condition - it looks like the massive problems the club and Redbridge had last season are now a distant memory.

The programme that Barkingside produce called 'THE OAKSIDE GAZETTE' deserves a mention, a very informative read that's included in the £6 entrance fee which is excellent value for money in the cold end's book. 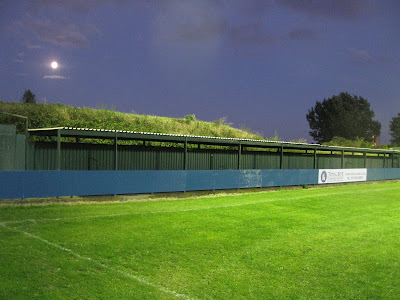