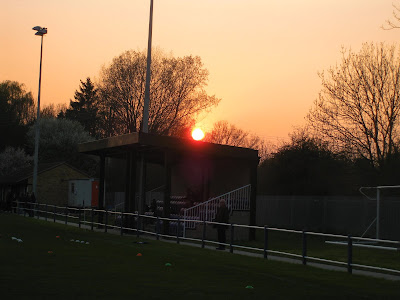 * The Sun sets behind the main stand

Whilst most footballing eyes were focused on the North London area last night, the Town's of Takeley and Stansted which are only divided by the famous Airport were fighting out their own local derby in the Essex Senior League. 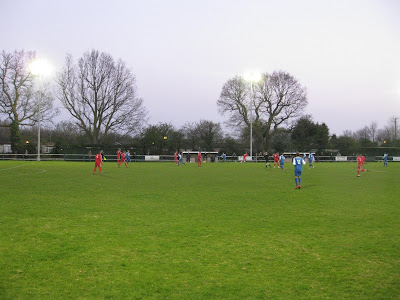 Table Topper's Stansted are looking at winning the league title for the first time in just under 40 years membership of the league and travelled to nearby Station Road to face their rivals who are sixth in the league having only lost two games at home so far this campaign.
Takeley have recently risen from the Essex Olympian League and are in their second season in the ESL. As such the ground at Station Road is quite basic having a small pavilion in one corner which house's the changing rooms, toilets and catering area along with a portacabin which doubles as a boardroom. There are no bar facilities as yet. There is a main seated stand and two covered area's on the opposite side. Large trees surround parts of the ground making it a very picturesque setting for the beautiful game to be played. 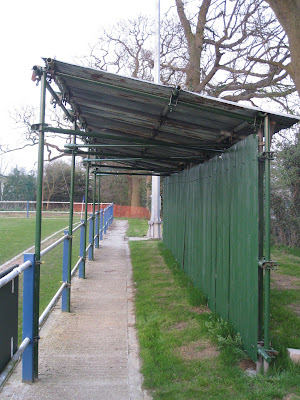 * Covered area on oppostie side to main stand

Being a local derby the game was fiercely contested by both teams with some hard but fair tackles flying in. Stansted took the lead from the first real chance of the game when a poor back pass to the Takeley keeper put him under real pressure and his resultant kick was picked up by a Stansted man who passed to Dwight Gayle to blast the ball into the net from an acute angle to the right hand side of the goal at the keeper's near post.
There were a few other half chances during the first period but nothing of note until right on 45 minutes when a free kick was lifted into the box and a coming together of a Stansted and a Takeley player (see video) resulted in the Stansted player falling to the ground and the referee blowing up and pointing towards the penalty spot to mass protests from the Takeley management and supporters present. The first team manager at Station Road is Don Waters who is a familiar face to Enfield Town fans as he was in charge at Sawbridgeworth Town when we played in the ESL in the early 00's. The cold end has watched the video several times and just can't decide if it was a penalty or not.... The referee only got one look at it and can only give what he see's so fair play and respect to him. 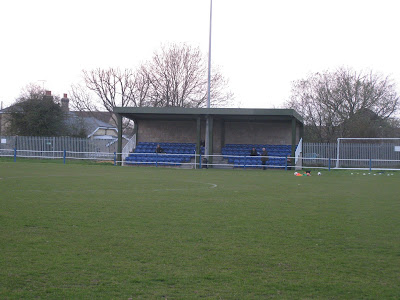 * The main stand
Stansted's John Bricknell scored the resulting penalty kick to make it 0-2 at the break.
The second half was much the same as the first, Takeley never really created any clear cut chances with the Airportmen having probably the best effort when a good shot from just inside the box was well saved by the home keeper. Stansted held on to gain a very valuable three points towards their Championship challenge. 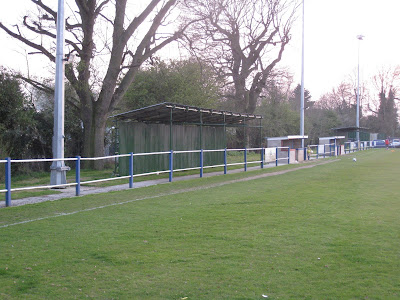 * A view of the two covered areas and dug-outs

* MINUS THE FIRST GOAL WHICH I UNFORTUNATELY MISSED ON CAMERA
at 21:53