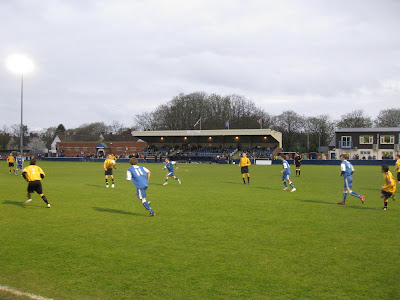 SCOTT SHULTON HAT-TRICK SEES OFF AMBERS
On a deceptively chilly evening Blue Square South Bishop's Stortford easily beat Ryman Division One (North) Cheshunt to lift the Hertfordshire Senior Cup for the 11th time in their history. Played at the Hertfordshire FA's well appointed County Ground in Letchworth Mark Simpson's side always looked in control from start to finish in their comfortable 4-0 victory.
The County Ground has cover on three sides and an impressive seated main stand. Baldock Town Letchworth who play at the stadium are currently top of the Hertfordshire Senior County League Premier Division and although maybe pipped to the title by Wormley Rovers or London Lions they surely will be in the Spartan South Midlands League soon.
Several ex Towner's were present, Mitch Hahn in the Blue's line up with Boniek Forbes and Matt Thomson starting for Bob Dearie's side.
Stortford started in a 4-4-3 formation with Hahn leading the line supported by Jon Docker and Charlie Simpson out wide. Number 9 Reece Prestidge played in centre midfield floating forward when attacking and sitting in front of the back four when his team were not with the ball. Cheshunt were a more traditional 4-4-2 formation with Jordan Lumsden sitting in front of the back four, Bradley Harrison and Chris Meikle were together up front. Matt Thomson started on the right wing. 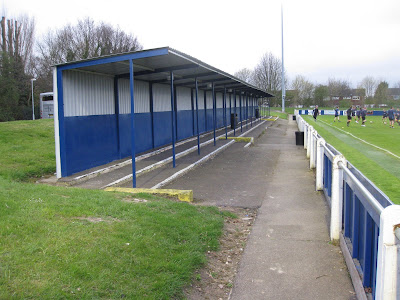 The side opposite to the main stand at The County Ground

Stortford had the first real chance on goal when Docker got a good shot on target from the edge of the box which was well saved by Amber's keeper Aaron Omand.
After 16 minutes Stortford got their first goal when from a corner Omand punched the ball out to Ritchie Jones on the edge of the box who fired the ball back into the net to make it 1-0.
The Ambers were roared on by a large vocal following including the famous Mr Fruitbat, they got back into the game but never really troubled Morgn in the Blues's goal with a Bradley Harrison shot wide of the mark from the edge of the box the only effort they could muster.

Cheshunt on the attack

It was 2-0 a short while after when Omand cleared the ball under pressure from an on running Hahn which then came to Simpson who squared for Shulton to shoot past Omand in the bottom left hand corner from the right hand side of the box. 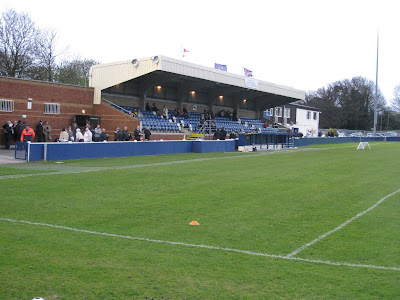 Another view of the Main Stand
SCOTT SHULTON SCORES HIS FIRST GOAL
Sheldon Sellear nearly made it 3-0 when he had a good header on target which was tipped over by Omand. The Stortford fans didn't have to wait long as right on half time it was 3-0 when Shulton ran with the ball into the box and was tripped by Amber's midfielder Iain Salt leaving Referee Mr Degnarain no choice but to award a penalty which Shulton duly scored to Omand's left hand side. Degnarain then blew up for half-time also immediately after the ball hit the back of the net.


Scott Shulton's 2nd goal from the penalty spot.
Cheshunt re-shuffled their pack at half time with Jordan Lumsden being replaced by Ola Akinnawo who took up position on the right wing with Thomson dropping back to centre midfield in front of the back four. Stortford also made a change bringing off Docker and replacing him with David Chick.
Hahn was unlucky when a delicate shot, after some fantastic work by Sellear, was very well saved by Omand. The Amber's keeper expertly tipping the ball around his right hand post from Hahn's close range effort. 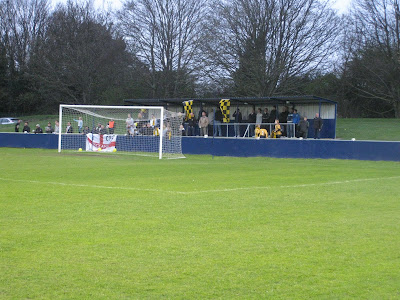 Shulton got his hat-trick with the goal of the night after some neat interplay he found himself one on one with Omand and lifted the ball over him for it to land in the top left corner. A great goal of tremendous quality. Shulton was taken off a short while after to a large round of applause from the Stortford faithful.
There was no other real goal-mouth incidents and the game ended 4-0 to Stortford. Aaron Omand was much the busier keeper with his opposite number Nicky Morgan not making a save of note throughout the 90 minutes. Cheshunt played some good passing football but couldn't get a sniff at goal with Stortford's central defender Lynval Duncan having a very assured and impressive game. Stortford's captain Matt Jones also had a good game at right-back but the man of the match has to go to hat-trick hero Scott Shulton.
The game was played in good spirit by both teams and even the most ardent of Amber's supporters will have to say Stortford desvered their triumph.
The cold end was impressed by referee Mr Ashvin Degnarain and his two assistant's Mr Lawson and Mr Starr. The game flowed brilliantly and every decision made was a correct one.
Bishop's Stortford
Nicky Morgan, Matt Jones, Ted Llewellyn, Jon Docker (Half time sub - David Chick), Lynval Duncan, Ritchie Jones, Mitch Hahn, Scott Shulton (Alli Abdullahi), Reece Prestidge, Sheldon Sellear (Manny Sackey), Charlie Simpson.
Subs not used - Jake Hall, Bert Greenwood.
Cheshunt
Aaron Omand, Gary Schillaci, Glen Parry, Nick Mountford (Tom Tresadern), Oliner Cleaver, Jordan Lumsden (Ola Akinnawo), Matt Thomson, Iain Salt, Bradley Harrison, Chris Meikle, Boniek Forbes (Graeme Dearie).
Subs not used - Ricky Light, Bradley Stamp. 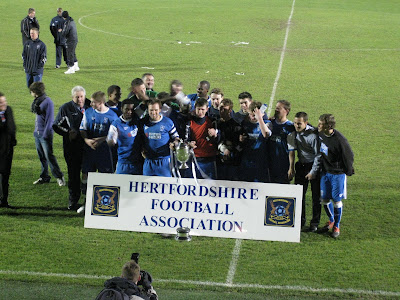