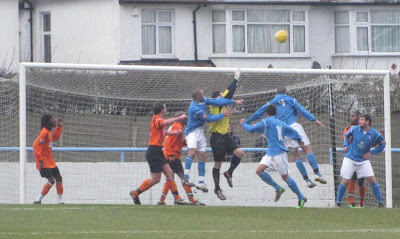 The weather cancelling Town's big day out today gave the cold end a chance to check out one of our rivals for a play off place in Wingate and Finchley, who since loosing 0-4 at home to Northwood in their last game of 2009 have been unbeaten in nine league games. Today, they faced Waltham Forest who themselves have been enjoying a few good results of late but where always going to find it hard going to Summers Lane as Dave Norman's team have one of the best home records in the division. 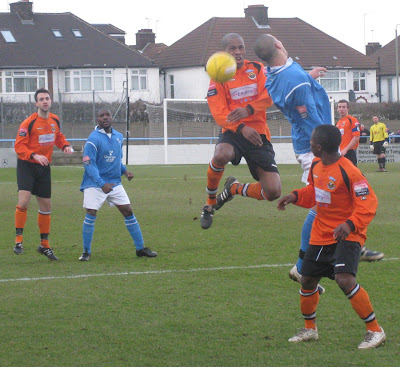 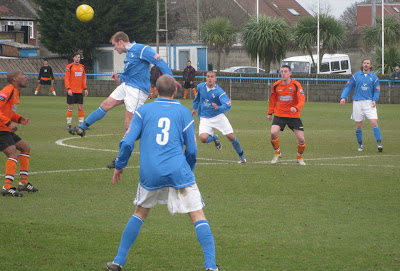 With many games cancelled due to waterlogged pitches it was surprising to see the surface at The Abraham's Stadium in such good condition. It's one of the best pitches I've seen this season so massive credit goes to the W&F ground-staff for keeping the field so nice in the atrocious weather we've been having. 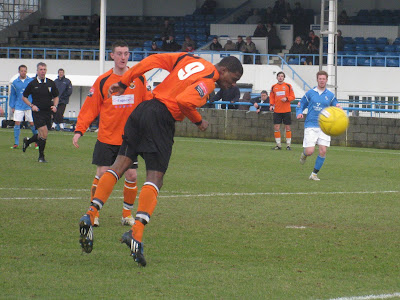 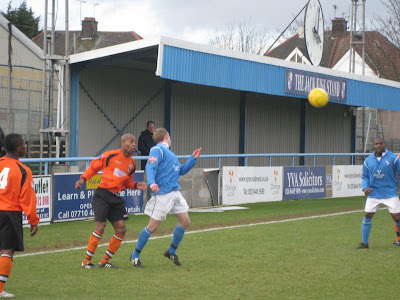 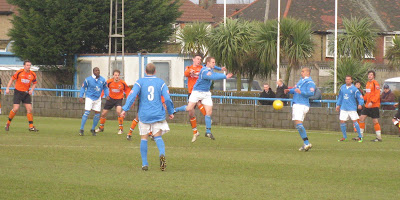 W&F ran out easy winners against a hard working Stag's side who played some nice football combined with long balls up to top scorer Danny Gabriel who showed some good touches in holding the ball up for his team mates. The home side passed the ball patiently with some neat build up play from the back with every player looking composed on the ball. Ahmet Rifat in the centre of midfield playing just in front of the back four stood out displaying some nice touches on the ball. Pedro Kinght appeals before being booked by Referee Mr Russell

Leon Smith up front for the home side is a powerfully built centre forward who has a good turn of pace, He created the opening goal after about 30 minutes, for his strike partner Chris Chase. Smith ran down the right hand side of the field beating one Stag defender putting in a good cross for Chase to easily knock into the net past Sam Tanner in the away goal. 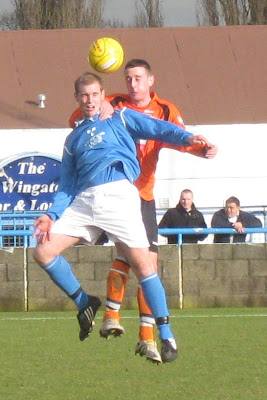 W&F were well on top in the first period with Rifat stinging the hands of Tanner with a shot from outside of the box along with Smith geting in some good positions but never seeming to get a clear cut chance.

Former Thamesmead Town midfielder Peter Smith had one shot on target for the Stags which was comfortably saved by Gavin King in the home goal. 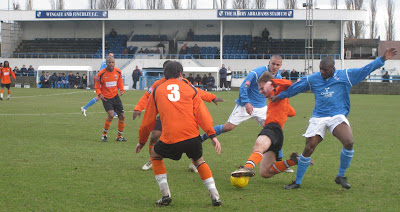 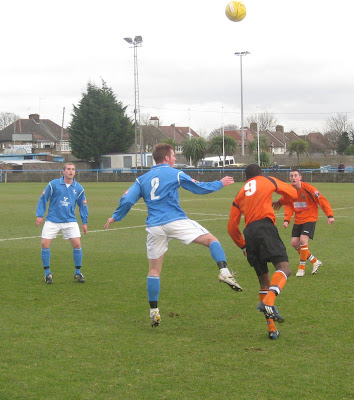 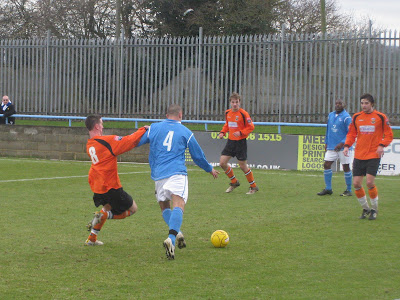 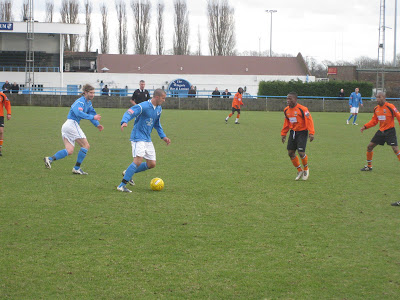 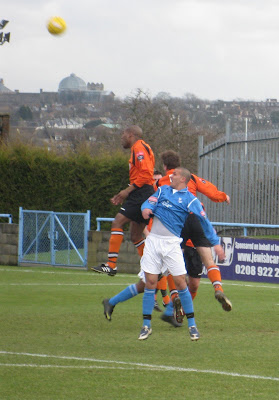 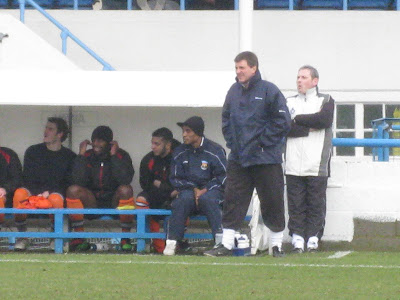 Phil Miles and the Forest bench look on 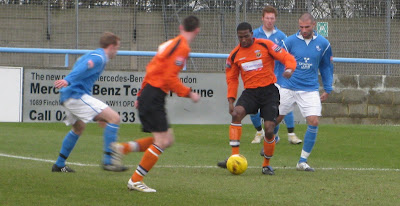 It was 2-0 just prior to the break when Ryan Oliva slipped when with the ball inside the box allowing the confident Chase to bag a brace with a good shot past the unlucky Tanner. 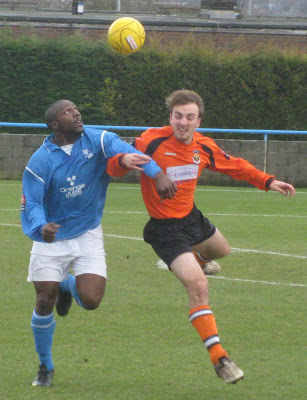 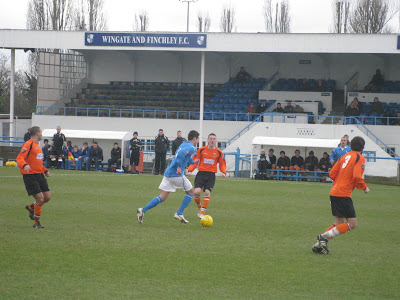 Ben Yiadom of Waltham Forest was the smallest player on the pitch but displayed how good he was in the air several times beating taller and bigger players to the ball. He looks a good player.

The second half was keenly contested but neither side created any really good opportunities with W&F happy to see the game out to gain a valuable three points.

Stag's captain Spencer Harrison who also had a good game rattled the home cross-bar with the away side's best chance of the game with a first-class header from a Danny Gabriel corner kick.

It had been really nice weather with the Sun trying to break through the clouds, that was up until the final ten minutes when the heaven's opened. The monsoon conditions prompted a mass dash for cover under the main stand with only a few hardcore fans staying out getting soaked.

W&F are now in fourth place in the table two points above Enfield Town but they have played two more games. They played some attractive football today and look a strong side so will be right up in the play-off mix come the end of April. In March they face Potters Bar Town, Maldon Town, Ilford, Brentwood Town and Waltham Forest in the return game before playing fellow play off hopefuls Thamesmead Town, Concord Rangers and Northwood. Town are a different side to the one which lost to W&F in November so will be a different proposition when we face them on the final day of the season. I see no reason why Town can't beat them!! 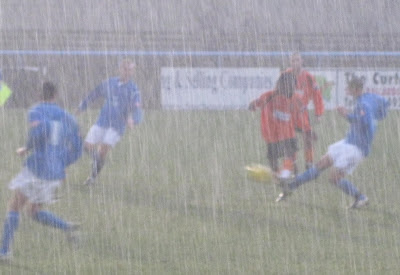 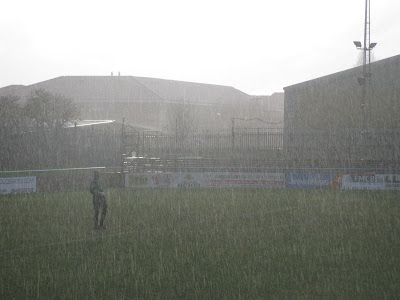 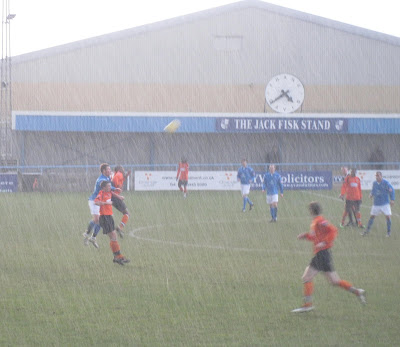 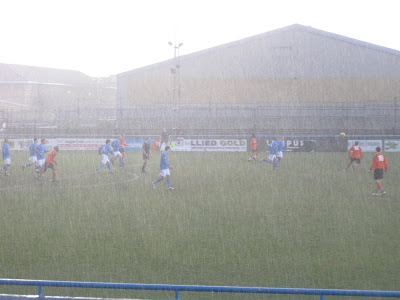