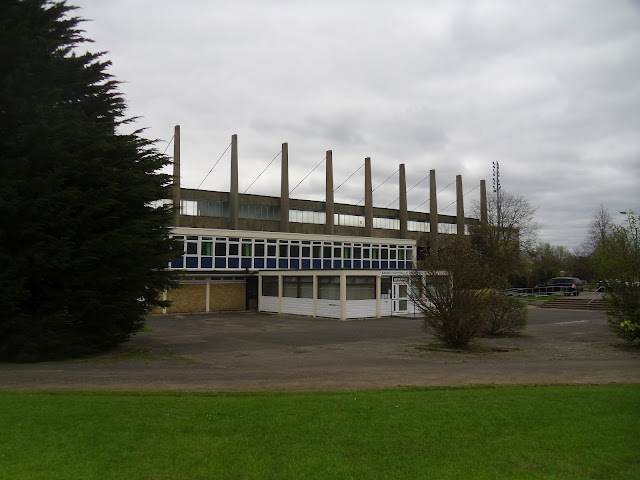 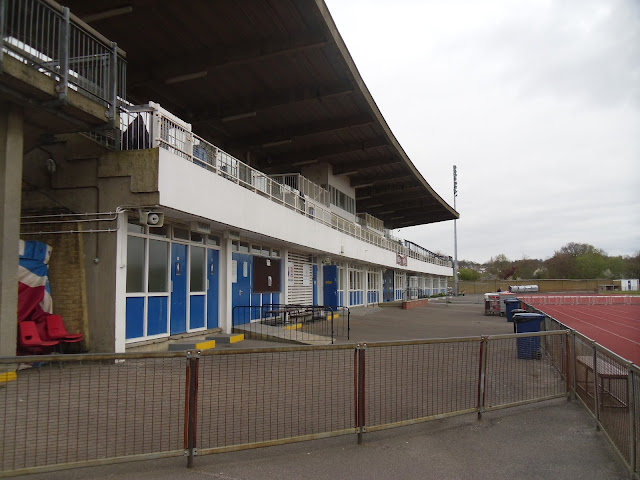 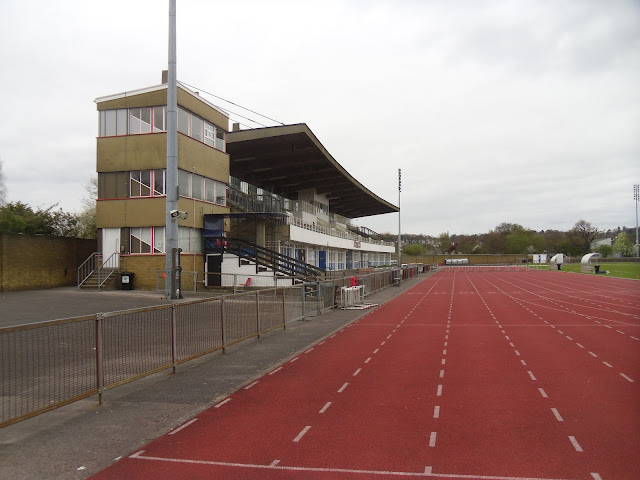 For the past five seasons 'the other Senior Football Club from Camden & Islington' has played it's games at The Barnet Copthall ground due to the lack of a stadium in their home borough. Yesterday afternoon The Townies graced the hallowed turf for the final time as at the end of the season they'll be moving to pastures new and as Chairman Catherine Dye states in the programme 'we have to go back to being nomads'.

The Copthall Stadium and surrounding area is scheduled to undergo extensive renovation and redevelopment to become the home of Saracens Rugby Club whom have playing at Vicarage Road since moving from Enfield FC's Southbury Road in 1997. How long ago does that feel?? 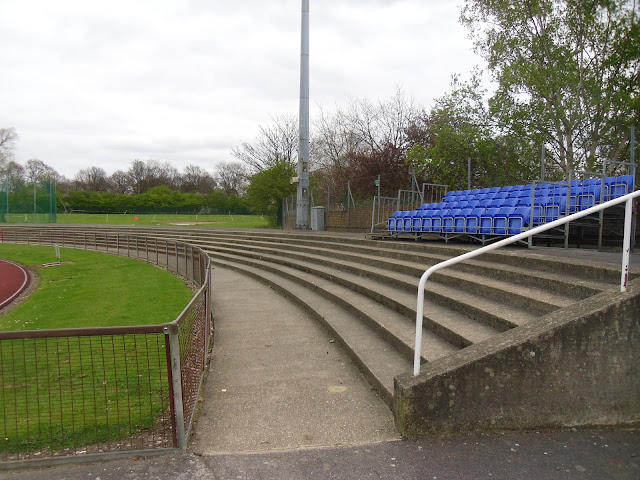 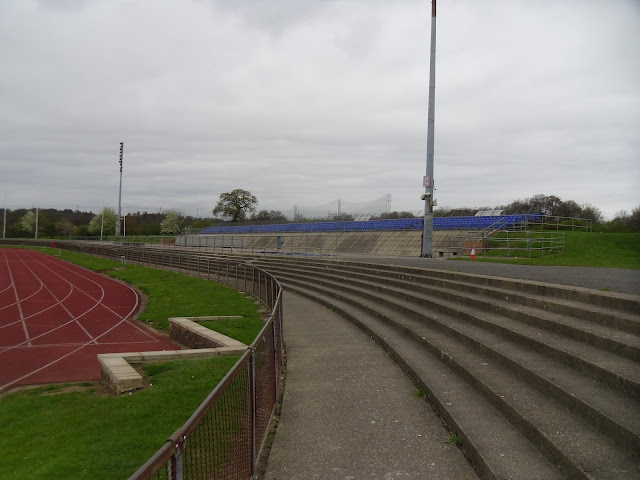 For this final game at Copthall Kentish Town entertained Tokyngton Manor in a Spartan South Midlands League Division One game. Manor formed from the ashes of Ruislip Manor have had an eventful few seasons since "forming" in 2008. This season they rejoined the SSMFL after spending the 2010/11 season in the Hayes/Middlesex Sunday League Premier Division. This was after problems with their then Viking Sports Ground in Greenford which forced them to withdraw from the SSMFL at the end of the 2009/10 season. This season they have been ground sharing at Amersham Town's Spratley Meadows ground, which is far from ideal, as it's a near 50 mile round trip from the area they represent in the London Borough of Brent. 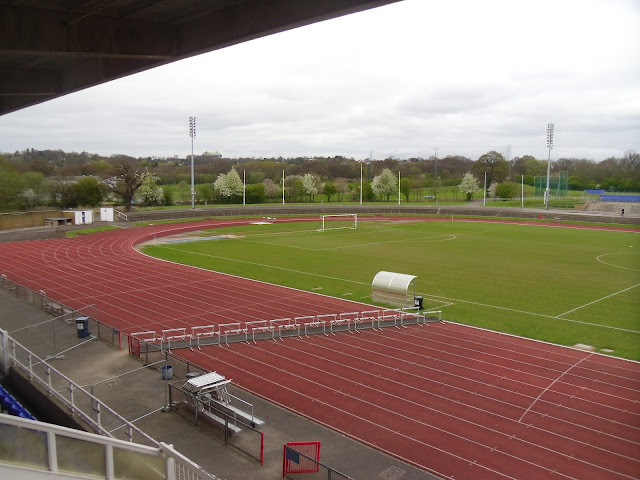 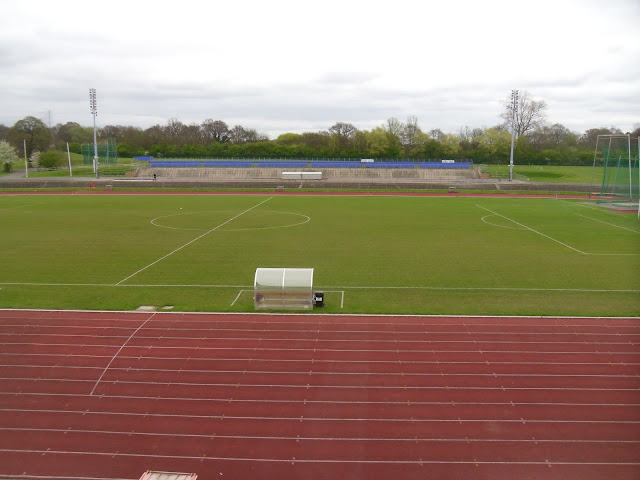 Despite, at the end of the season, not currently having a stadium to call 'home' the future of Kentish Town looks (hopefully) bright. Director of Football Frank Zanre (who helped formed the club in 1994) states in the programme 'Another season is nearly over and what a season for the club, on and off the pitch. Only four weeks ago it looked as if the end of the club was around the corner and here we are four weeks later and the future looks brighter already'. He goes on to mention the club have teamed up with St Lawrence Youth FC for next season and have joined ranks with youth clubs within the Camden area and will work closely with them over the coming months. If there ever was a case to advertise that it's not just about the first teams for non-league clubs at this level then Kentish Town can lay claim to this. It's good to see them giving so many youngsters in the Camden and Islington area a chance to play organised football and thus maybe a step on to greater things.

Since forming in 1994 Kentish Town have moved from entering sides in the Camden & Islington Youth Midweek League and The Enfield & District Youth League to then in 2003 making the jump into Senior Football in the SSMFL Division Two where they played their home games at King George IV playing fields in Barnet. Their first senior game was a 0-0 home draw with Padbury United BTFC on Saturday 16th August 2003.

Since moving to The Copthall for 2007/08 it's been an up and down ride over five eventful seasons. From winning the Division One title in 2008 and promotion, then to a four season stay in the Premier Division followed by relegation at the end of last season. This season they have struggled but will finish above the relegation zone in Division One. One of the highlights has to be their debut in the FA Cup on Saturday 17th August 2008 when a decent crowd of 179 people saw the 1-1 draw with Wellingborough Town at The Copthall. 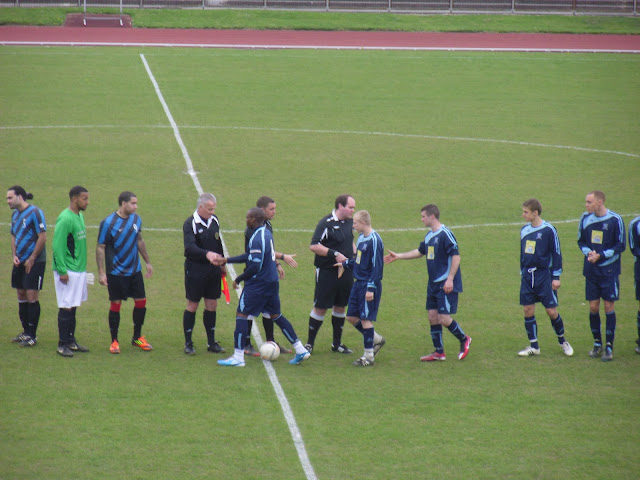 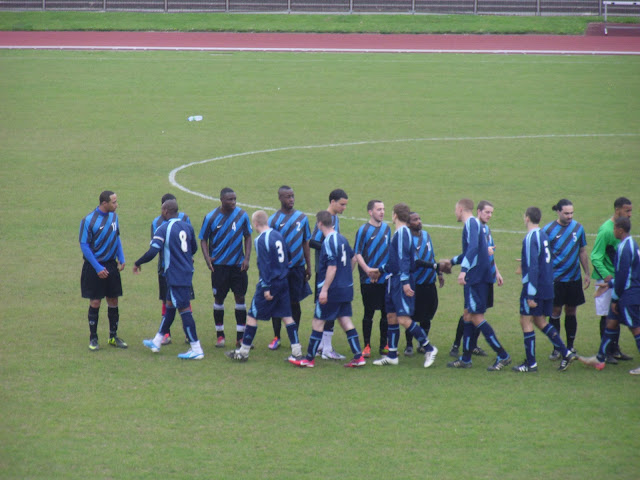 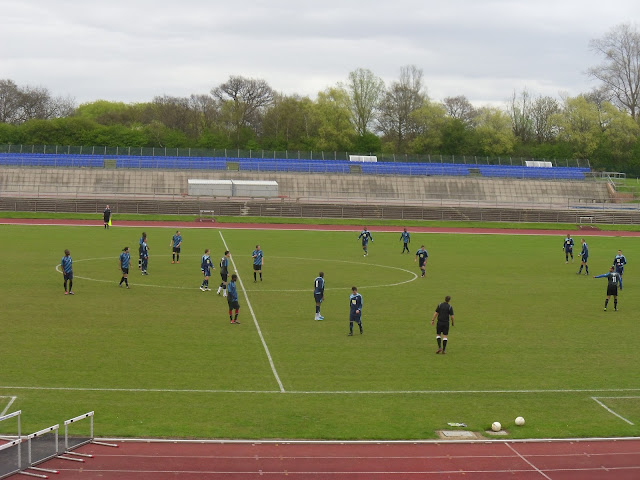 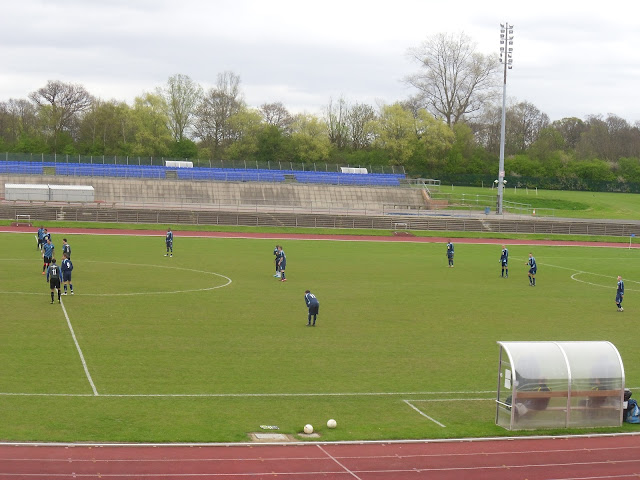 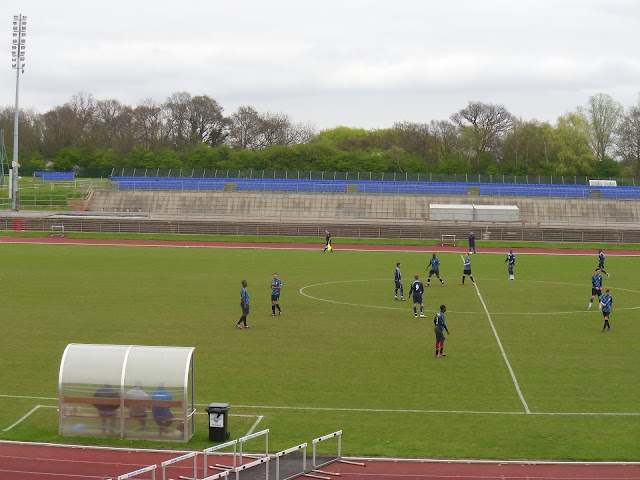 The first thing you'll notice about the game is that it's probably the worst case of kit clash you've ever seen. Kentish took the field in their usual blue shirts and blue shorts with a dash of sky blue on their shirts with the visitors in a shirt that had blue and sky blue diagonal stripes on the front and grey on the back with black shorts. It was hard to make out which team was which at times??
I arrived at the ground at around 2.20pm to see the Kentish squad training and warming up on the pitch with no sign of the visitors who drifted onto the pitch at around 2.30pm. Their late arrival didn't seem to effect their play as they were the better side throughout the ninety minutes and played some really good football at times. At half time the score stood at 0-1 but Tokyngton could of at least scored 3 or 4. Two late goals in the second half sealed the victory for the visitors with Kentish not troubling the Tokyngton keeper throughout the 90 minutes.
The Cold End hopes Kentish Town find a new home for next season as every time I've seen them play and visited The Copthall I've always found a warm friendly welcome at the stadium. As Catherine Dye states in the programme 'one door closes - another will open'. I really hope it does for Kentish Town FC. 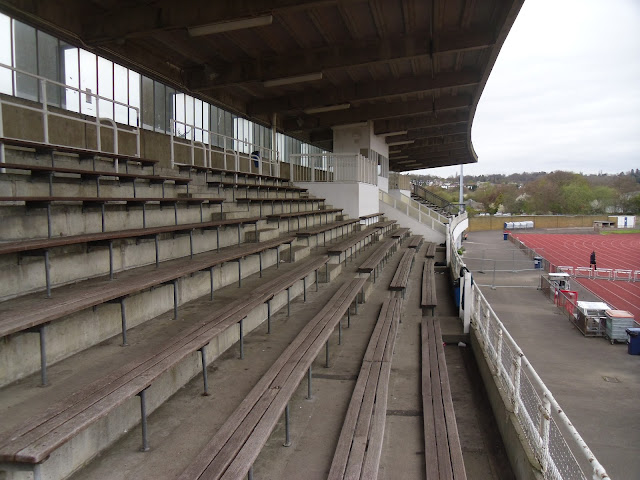 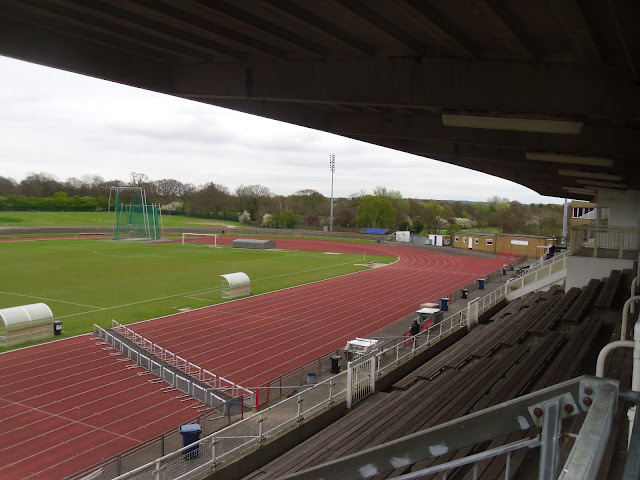 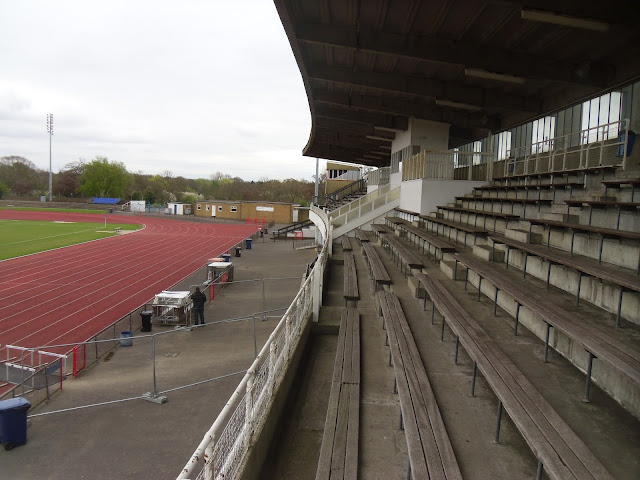 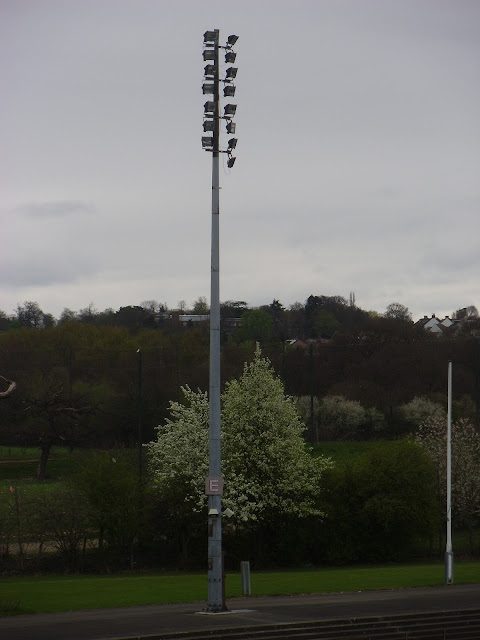 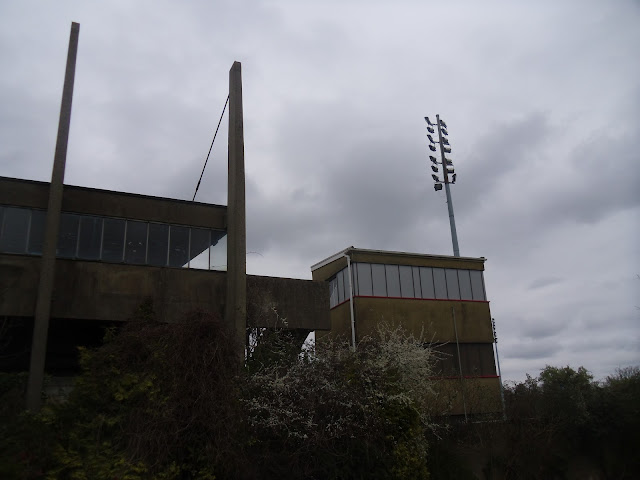 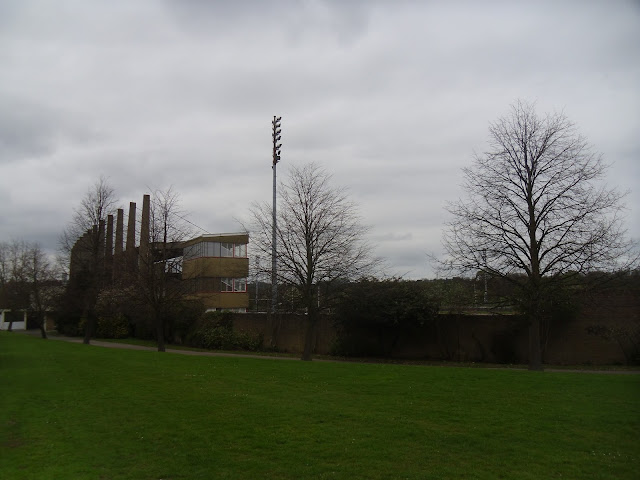 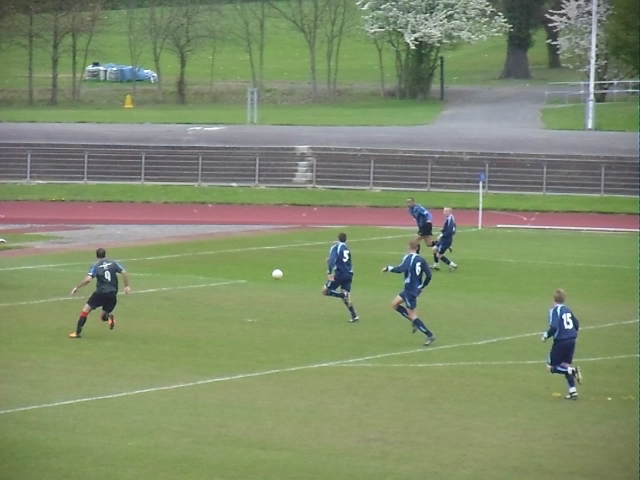 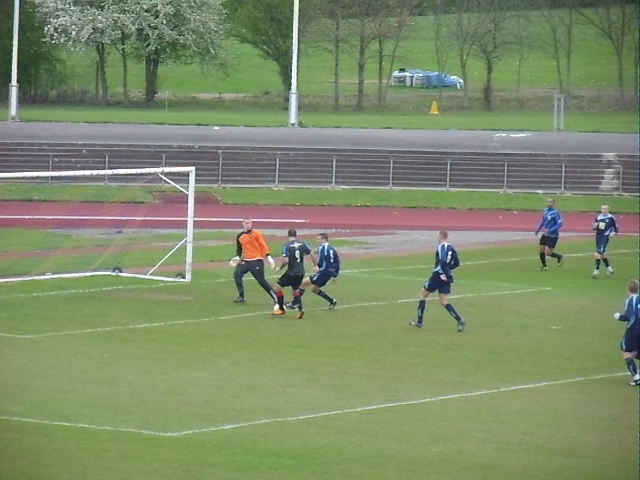 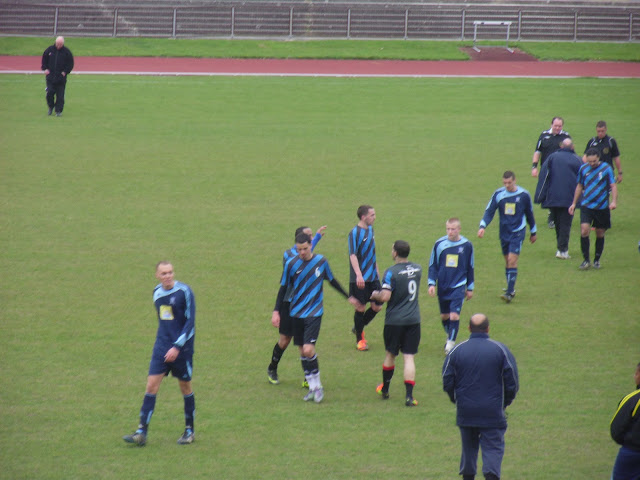 MATCH HIGHLIGHTS ARE BELOW
inc all three goals