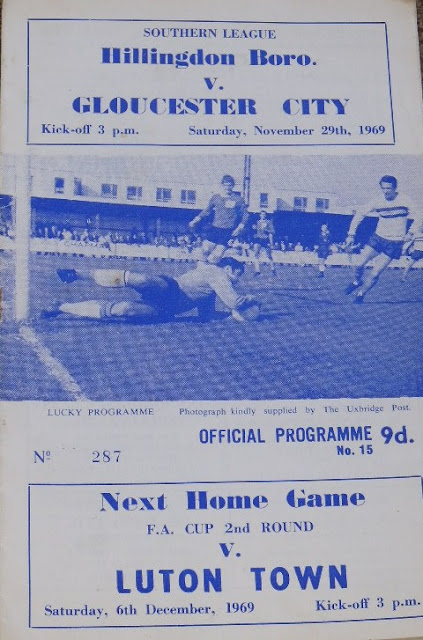 On Saturday 29th November 1969 Hillingdon Borough welcomed Gloucester City to their Leas Stadium in Falling Lane, Yiewsley for a Southern League Premier Division game. Borough were in the process of a great season and were at the time in second place with six games in hand and only one point behind Hereford United in first place. The reason for the games in hand was due to Hillingdon's amazing FA Cup run to the second round which, as the programme advertises, they would face Football League side Luton Town on Saturday 6th December.


At that time The Southern League along was considered the strongest of the non-league's in the South of England and this can be illustrated by the fact that three teams in the division in 1969 were elected to joine the football league during the 1970's. At the end of the season featured here 1969/70 Cambridge United replaced Bradford Park Avenue who had finished rock-bottom of Division Four. In 1972 Hereford United replaced Barrow who had finished 3rd from bottom of the Fourth Division with Stockport County and Crewe Alexandra below them and perhaps, most famously, Wimbledon replaced Workington in 1977.

The programme welcomes the visitors who were in the Premier Division for the 1969/70 season after finishing in 3rd place in the Southern League First Division.

The notes continue with a small report on Borough's victory over fellow Southern League Wimbledon in the FA Cup - 'doesn't that result look great fans, I don't know whether you felt the same as I did looking at this match, but if Dicky and the lads were able to hold the Dons against the wind in the first half, then it was our match and through to the second round'. Bill Carter and Seth Vafiadis scored the all important goals in the game.

Borough's fixtures show that they played in the Premier Midweek Floodlight League alongside the Southern League Premier Division. Interestingly the notes detail the recent away game at Chesham United - 'The Chairman and Board of Directors of Hillingdon Boro' FC would like to take this opportunity of thanking Mr Tommy Barnard, Chairman of Uxbridge FC for helping us by using his side to play the above match for us and in particular doing so well'. It looks as if due to the fixture pile-up Borough were getting their neighbours, then of the Athenian League Division Two, helped out by playing the game.

Borough's crowds at the time were brilliant. In their seven Southern League home games they were averaging 1601 people and this figure increased for the cup games. 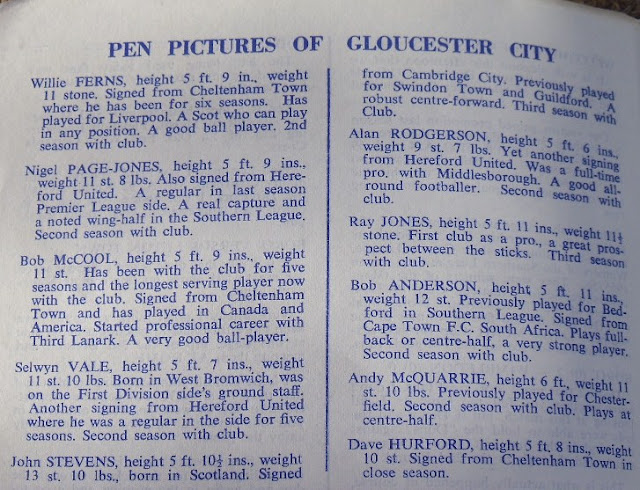 Cambridge United went on to win the league title by one point to Yeovil Town and as stated gain entry to the football league. Hillingdon Borough finished in sixth position.

In the FA Cup they recorded a famous victory over The Hatters (whom at the time were members of the Third Division) and went on to face another non-league side in the Third Round. Sutton United came to The Leas Stadium and drew 0-0 and won the replay at Gander Green Lane 4-1.  Isthmian League Sutton went on to lose 0-6 at home to Division One giant's Leeds United.

This was Hillingdon Borough's most successful period (they had finished 2nd in the league in 1968/69) and under the player/managership of ex QPR and Fulham player Jimmy Langley they reached the final of the FA Trophy in 1971. They were 0-2 in front at half-time but Telford United scored three times in the second half to lift the Trophy. Langley had started his career in non-league football playing for Yiewsley (the original name of Hillingdon Borough) , Hounslow Town, Uxbridge, Hayes and Guildford City before joining football league side Leeds United in 1952 going to joing Brighton and HA, Fulham (where he made 356 appearances and scored 33 goals) and QPR. He also gained thee England caps against Scotland, Portugal and Yugoslavia in the late 50's.

After the glory of the late 60's and early 70's the club were relegated at the end of the 1973/74 season and spent one year in Division One. They then finished 12th, 15th, 15th, 14th in 1979/80 whereby they were relegated to Division One (South) finishing 7th, 13th. 19th. 5th and 7th and 4th place in 1984/85 when for one season the 'Borough' was dropped from the name and they were simply known at Hillingdon. They were managed in 1976 and 1977 by Barry Fry who had moved from Dunstable Town. There was still some glory whilst Fry was boss with a victory over Torquay United in the FA Cup first round before defeat to Watford at home in the Second Round. They also reached the first round of the cup in 1978 when a trip to the Vetch Field to face Swansea City resulted in a 4-1 defeat.

Following financial problems and reduced crowds the club merged with 1984/85 London Spartan League Champions Burnham FC to form 'Burnham and Hillingdon FC' and continued to play in the Southern League Division One South. The "new" club continued for two seasons but it was not enough to save the Hillingdon name from disappearing when in 1987 the name reverted back to Burnham.

After a gap almost four years in the wilderness Hillingdon Borough FC were effectively re-formed in 1990 when officials of the local Chiltonean League side, Bromley Park Rangers, took over the Ruislip FC ground at Breakspear Road and together with four of the former Hillingdon Borough directors, formed the new club - Hillingdon Borough (1990) FC. 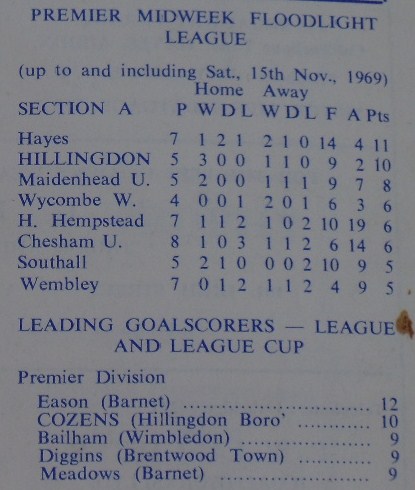 The club has since purchased  and redeveloped the site now named the The Middlesex Stadium.

More glory was to come in 2007/08 when members of the Southern League Divison One (South and West) they lifted the Errea Southern League Cup beating Clevedon in the final by a score of 3-1.

These days Hillingdon Borough play at Step 5 of the non-league pyramid in the Spartan South Midlands League following relegation from The Ryman League Division One (North) at the end of the 2008/09 season. Since then they have finished in 18th place (of 22) and 16th place (of 23). This season they have improved and are currently in 8th position.

Their average crowd for league games this season is 43 which is down somewhat on the four figure averages the original club used to get in the glory days of the 1960's and 1970's.
at 12:40