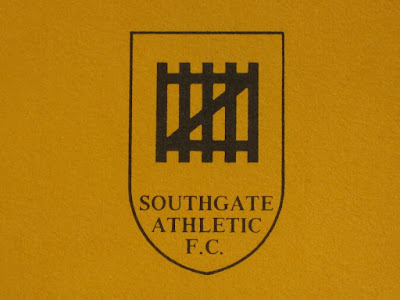 Southgate Atheltic FC were granted senior status for the 1985/86 season after playing in the London Spartan Intermediate League for a number of years and prior to that the Northern Suburban League and when formed after WW2 the Wood Green & Southgate League. 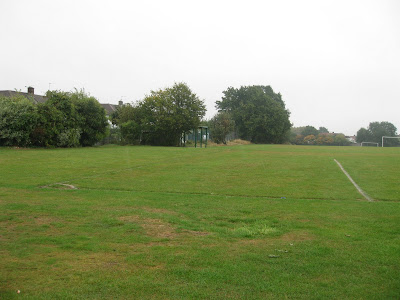 The club played their home games at the Tottenhall Road Sports Ground which is technically in Palmers Green just near to the A406 and A10 junction. The ground was simply a roped off pitch with a very small stand offering cover for a handful of spectators. 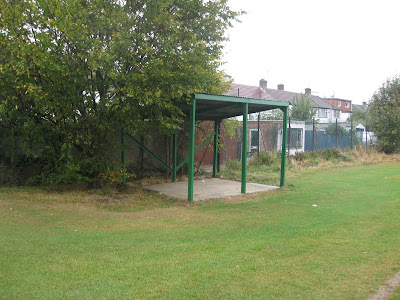 ***The 'main' stand***
The club were runner's up in their first season as a senior club in the London Spartan Senior Division and were promoted to the Premier for 86/87, the club's reserve side were champions of the reserve division in 85/86.
A respectable 5th place was attained in their debut season in the top division followed by a runners up position in 1987/88. This season also marked Athletic's debut in the FA Vase where they defeated J&M Sports, Newport Pagnell Town, Vauxhall Motors (Luton) and Faversham Town before UCL League side Northampton Spencer knocked them out in a 3rd round replay 3-1 at Kingsthorpe Mill.
The London Spartan was quite a strong league at this time featuring teams such as Cheshunt, Brimsdown Rovers, Abingdon Town, Northwood, Barkingside, Edgware Town, Waltham Abbey, Thamesmead Town, Amersham Town, Hanwell Town, Corinthian Casuals and North Greenford United.
The club managed a 3rd place position in 1989/90 and then 11th, 15th, 22nd bottom and 18th out of 19 teams in 1993/94 which was to be their last season in the London Spartan League. The club's record for their final season read played 36 won 6 drawn 5 lost 25 GF 47 GA 90 PTS 23. 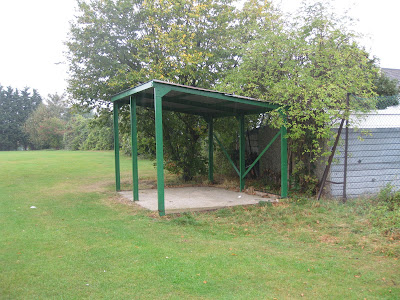 Southgate then dropped into the Middlesex County League Premier for the 1994/95 season replacing the place which had been taken by their reserve team in the league. It was struggle for the team winning only 7 of their 24 games. The next season was even worse with a record of 5 wins from 20 games and a finish of 2nd from bottom in the league.

1996/97 was to be Athletic's final season when they finished bottom of the league wining just four games against Stonebridge Town, Mill End United, Pitshanger twice. Their final victory coming away at the later in a 4-3 win on Saturday 5th April 1997. The club also suffered a 11-0 defeat at Willesden Constantine on 14th December 1996.
Southgate did not enter a team for the next season and have not played a game since.
The Southgate area now has two teams playing under the Southgate name on a Saturday at an Amateur namely Southgate Olympic in the Southern Amateur League (who play at Barrowell Green off of Hedge Lane in Winchmore Hill) and Southgate County FC in the Amateur Football Combination (at Chalk Lane, Cockfosters). 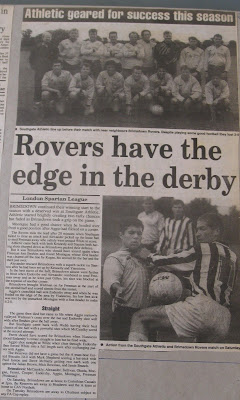 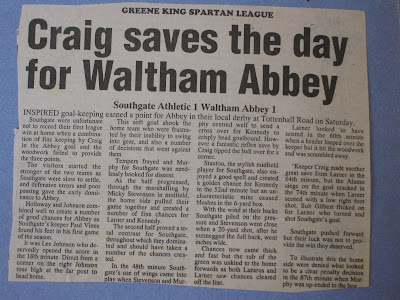 ***Two local press reports for the 1-1 draw versus Waltham Abbey in September 1990 and the local derby versus Brimsdown Rovers in August 1992, click on the picture to enlarge and read***
at 11:06