It's going to be cold one this weekend with temperatures currently forecast to get down to as low as -5 in Bedfordshire and Hertfordshire tonight. On Saturday between 1pm and 5pm it's predicted to be 1 or 2 degrees above freezing so if any games are on (hopefully!!) fans will have to wrap up warm!

I'm sure if it stays this wintry, we'll see more than a few postponements. With this is mind I'll keep the preview to a 'lite' version this week as many games might not be played.

Firstly, I'll mention a game which will unfortunately not be taking place - Harlow Town were scheduled to take on local rival's Hertford Town which will have been a game that would have attracted a decent crowd had it been played. The news this week that The Hawks have withdrawn from the Southern League Division One Central due to the ongoing problems with their new 3g pitch with was re-laid in the summer. Hopefully such a big club as Harlow Town will make a comeback for the 2023/24 season.

Vanarama National South
ST ALBANS CITY v CHELMSFORD CITY
Just seven points separate these two teams in an eighth v fourth in the table clash. Both have play-off ambitions with the Essex side having an outside chance for the title although Ebbsfleet United are huge favourites to finish top. The home side are one of the form sides in the division in the last six games winning four, drawing one and losing one. The Clarets lost 2-1 at Dulwich Hamlet on Tuesday evening in a game which saw three red cards issued - Eduino Vaz and Jamie Yila were sent off for Chelmsford.
St Albans City striker Shaun Jeffers is currently joint top scorer in the division on 14 goals with Ebbsfleet's Dominic Poleon.
The Saints are under the new management of David Noble who recently took over the job on a permanent basis in November. It's the former Bristol City and Exeter City midfielder's first job as a manager. 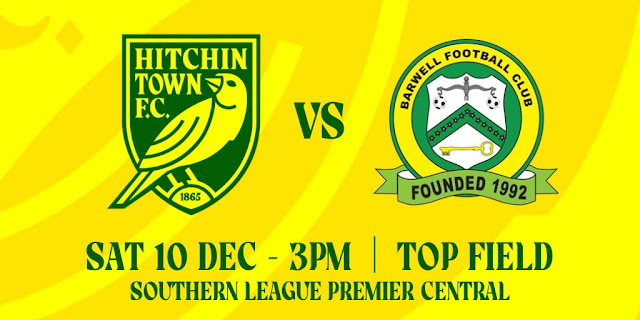 Pitching In Southern League Premier Central
HITCHIN TOWN v BARWELL
The Canaries are on a fantastic run of form after a miserable run of form in September and half of October where they played eight league and cup games without a win.
Including their 2-1 win at Stratford Town on Tuesday 25th October they have played eleven league and cup games winning seven, drawing two and losing two. This has pushed the Hertfordshire side up into fifth place in the table and play-off contenders.
Barwell make the trip down from Leicestershire also in great form with only one defeat in their last eight league games of which they have won five. 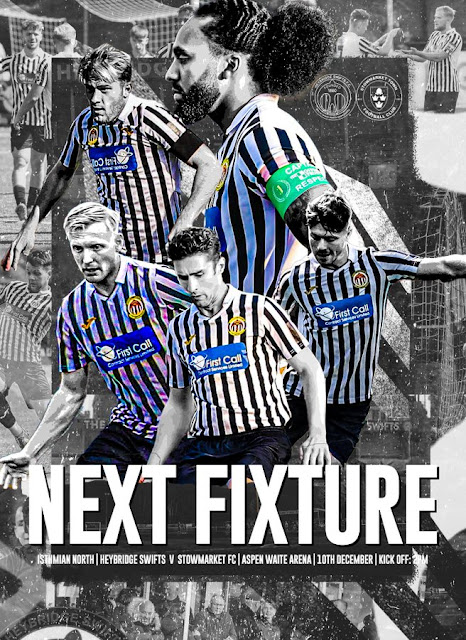 Pitching In Isthmian North Division
HEYBRIDGE SWIFTS v STOWMARKET TOWN
Third v Fourth in the table - Both have only lost one league game all season.  The Swifts haven't lost in nine league games with The Old Gold & Blacks thirteen league games unbeaten - they have five clean sheets in their last six games. 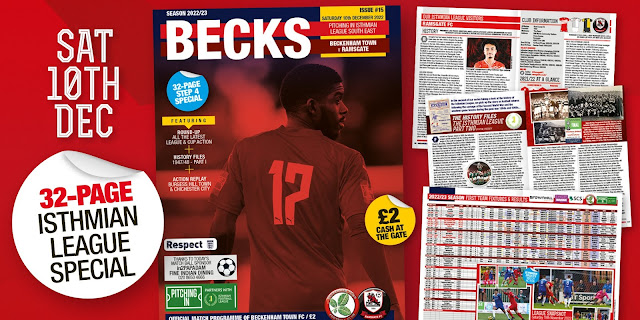 Pitching In Isthmian South-East Division
BECKENHAM TOWN v RAMSGATE
Second v First in a top of the table clash - The Rams have lost two of their last six games but have won the other four. Both had good victories in their last matches with Beckenham Town winning 4-1 at home to Chichester City on Tuesday evening and The Rams winning 1-3 at Whitehawk last Saturday with Kane Rowland scoring twice.
Spartan South Midlands League Division One
WELLINGBOROUGH WHITWORTH v REAL BEDFORD
Bottom v top of the table. The visitors have won seventeen of their eighteen league games so far this season scoring 62 goals in the process which averages at 3.44 goals per game. The home side lost in the play-off final to Shefford Town & Campton last season but have really struggled this campaign with just three wins from sixteen games played. They have lost ten of their last twelve games.
THE COLD END
at 20:25