Good Afternoon everyone,
Once again, a very big thank you for reading and supporting THE COLD END. Here's the pick of the local non-league action this weekend. Have a great time whatever you are doing.

EMIRATES FA CUP ROUND TWO
EBBSFLEET UNITED v FLEETWOOD TOWN
It's been two rare defeats for Ebbsfleet United recently going down 1-2 at home to Tonbridge Angels in the league last weekend they went down 0-1 to fellow Vanarama South side Eastbourne Borough in the Isuzu FA Trophy.
The Kent side were unbeaten in their first twenty league and cup games - they beat Step One side FC Halifax Town in the First Round.
The League One side are currently seventeenth in the table and have two wins, five draws and two losses in their nine games on their travels.
They played another Vanarama South side in the First Round beating Oxford City 3-1 at home.
Celtic legend Scott Brown has been in charge at Fleetwood Town since May.
This game is being played on Sunday and is live on ITV kicking off at 12.30pm.
VANARAMA NATIONAL LEAGUE
WEALDSTONE v SCUNTHORPE UNITED
The Stones recently halted a five-game run of league defeats with a 0-1 win at Altrincham, a 0-0 home draw against league leader's Wrexham and a 1-2 victory at York City last Saturday. The draw against the big spending Welsh side was played in front of a crowd of 2,817 which is a club record at Grosvenor Vale.
After coming down from League One in 2019 and League Two in 2022 it's looking a real possibility of a further relegation this season for The Iron. They are currently second from bottom in the Vanarama National League with only three wins this season.
All of those have come in home fixtures to Yeovil Town, Dorking Wanderers and Gateshead. Their last win on their travels in a league fixture was back on Sunday 26th December when they won 1-3 at Oldham Athletic where they had 413 away fans - I wonder how many will be making the trip to Grosvenor Vale?
Their league away form since the game at Boundary Park makes pretty grim reading for their loyal supporters -
The Iron have this fixture and a trip to Yeovil Town in December to win or they will have the unfortunate record of going a full calendar year without a win away from home.
Stuart Maynard's side are only four points from the play-offs but also just nine points from the drop zone so they will be looking to get a valuable three points in this game. 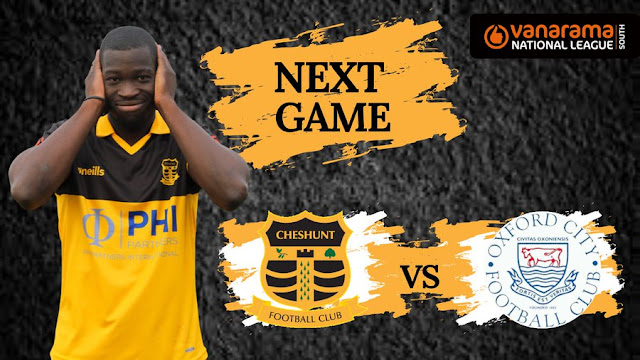 VANARAMA SOUTH DIVISION
CHESHUNT v OXFORD CITY
The Ambers have found it tough going at Step Two of non-league football since promotion at the end of last season. Craig Edwards side has four wins from eighteen games and are currently languishing in the drop zone.
This weekend they host 8th place Oxford City before a big seaside away day at Weymouth on Saturday 3rd December. The Terras are currently bottom of the table one below the Hertfordshire side.
In their last home they were 0-2 down to Chippenham Town but came back to win 3-2 before losing 1-0 at Taunton Town and being knocked out of the FA Trophy at Peterborough Sports last weekend.
The Hoops were also knocked out of the FA Trophy by Step Four side Plymouth Parkway going down 2-4 on penalty kicks after a 1-1 draw. They then got a very creditable home draw 1-1 to title chasing Dartford.
PITCHING IN ISTHMIAN PREMIER DIVISION
POTTERS BAR TOWN v HORNCHURCH
A top of the table clash in Hertfordshire as The Scholars welcome The Urchins. The home side are having the best season since they were formed in 1960.
Former Cray Wanderer's player Kasim Aidoo scored twice in their 1-2 win at Haringey Borough last weekend which they followed up with a truly amazing 4-3 home victory over Lewes on Tuesday evening. With just 10 minutes to go they were 1-3 down but scored three goals to win the three points
They have recently signed striker Nick Dembele from Bognor Regis Town who has scored 3 in 6 games since joining. Former Met Police midfielder Rudy Allen, who joined the club in September, scored the dramatic winner against Lewes.
The visitors have one of the best squads in the division including former East Thurrock United and Chelmsford City player Sam Higgins who has netted 16 league and cup goals so far this season. Liam Nash has also been in great form scoring 10 league and cup goals.
They could only manage a 1-1 draw at struggling Brightlingsea Regent last weekend. The starting XI and subs bench at Regent last weekend included Joe Wright, Micky Parcell, Remi Sutton, Ollie Muldoon, Lewwis Spence, Sam Higgins, Liam Nash, Ricky Hayles and Charlie Stimson who all were involved in their famous FA Trophy Final win in 2021.
A big game for both sides - A comparison below shows how big an improvement Potters Bar Town have made under the management of Sammy Moore who joined in January 2022. 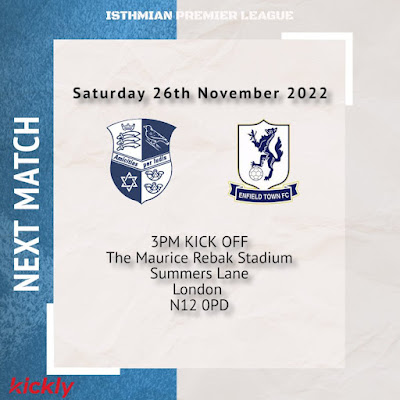 WINGATE AND FINCHLEY v ENFIELD TOWN
What's known as 'THE REAL NORTH LONDON DERBY' by fans of both teams who have regularly played each other since Town were promoted to Step Four in 2005. Wingate were promoted to Step Three in 2011 with their rivals joining them in 2012 so since 2005 it's only been the 11/12 campaign where they haven't faced each other.
Last season Town won 2-1 at Donkey Lane with Wingate winning 4-1 at The Maurice Rebak Stadium in which Antonis Vasiiliou scored twice.
Wingate are under new management having parted company with club legend Marc Weatherstone (also a former Town player) in mid-October.
Ahmet Rifat and Ricky Machel are currently in charge on an interim basis. Rifat knows the importance of this game having played in many Derbies against Enfield Town.
After the 4-1 defeat in February the Enfield Town's players and management will be looking to get some revenge and send their fans home happy!
PITCHING-IN SOUTHERN LEAGUE PREMIER SOUTH
CHESHAM UNITED v TRURO CITY
The Cornish side will arrive in Buckinghamshire top of the league and without a defeat. The Generals are currently third and nine points below The White Tigers but on a nine-game unbeaten run in the league.
Shaquille Hippolyte-Patrick scored a 90th minute winner in their last game which they won 2-3 at Gosport Borough.
Former Plymouth Argyle and Wrexham player Tyler Harvey has been in good form this season for Truro City scoring 18 goals so far this season.
PITCHING-IN ISTHMIAN NORTH DIVISION
GORLESTON v TILBURY
The Green Army are struggling in the bottom two of the division after promotion from the Thurlow Nunn Premier last season. The Dockers are also towards the bottom of the table in 15th place just 4 points above the Norfolk side making this a big game for both sides. Gorleston are currently ground sharing just over the Suffolk border in Lowestoft at Crown Meadow.
The Essex side have just two wins and seven goals scored in seven games on their travels in the league this season. 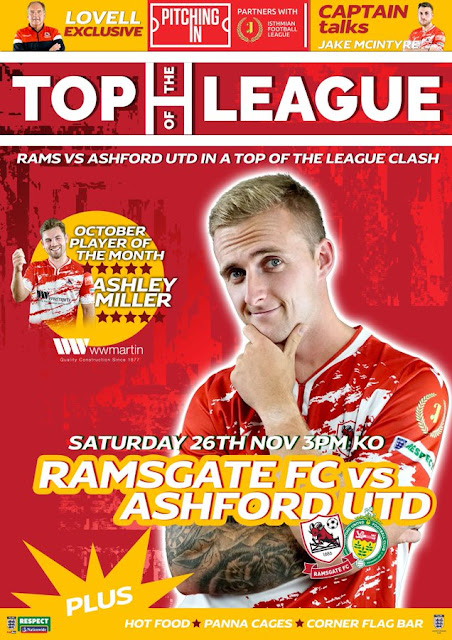 PITCHING-IN ISTHMIAN SOUTH-EAST
RAMSGATE v ASHFORD UNITED
A huge game at Southwood as top of the table Ramsgate welcome second placed Ashford United.
The Rams narrowly missed out on a play-off place last season finishing in 6th place by one point. The Nuts & Bolts were runner's up to Hastings United but lost in the play-off final at home to Herne Bay who won 0-2 in front of 1,865 people.
Ashford United had a big 4-0 victory at home to Haywards Heath Town last weekend with four different scorers on the scoresheet - Henry Muggeridge, Omar Lawson, Gary Lockyer and Lanre Azeez.
The Rams lost only their third league game of the season going down 2-0 at Littlehampton Town - it was their first league defeat away from home in the 22/23 campaign.
There is likely to be a decent crowd at this game.
SPARTAN SOUTH MIDLANDS LEAGUE PREMIER DIVISION
LEIGHTON TOWN v TRING ATHLETIC
A Bedfordshire/Hertfordshire border derby - only eleven miles sperate Tring Athletic's Grass Roots Stadium and Leighton Town's Bell Close home.
Both are in contention towards the top of the table. Leighton ate unbeaten in seven league games with Tring winning their last four league games scoring twelve goals.
DUNSTABLE TOWN v POTTON UNITED
Two teams who had contrasting starts to their seasons. Dunstable Town won five of their opening six league games but have since only won once in six games which came on Tuesday evening 2-0 versus Arlesey Town.
Potton only won two of their opening seven games but have since been unbeaten in seven games winning five of them.
ESSEX SENIOR LEAGUE
WEST ESSEX v REDBRIDGE
Fourth v Second in the table - The Motormen could go top if Enfield FC draw or lose their game at Saffron Walden Town.
The home side have lost three of their last six games but have got back to winning ways in their last two games with victories against Clapton and Little Oakley. 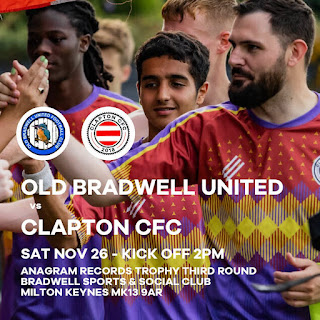 ANAGRAM RECORDS TROPHY ROUND THREE
OLD BRADWELL UNITED v CLAPTON COMMUNITY
The East London side will be well supported on the outskirts of Milton Keynes in this Spartan South Midlands Division Two v Middlesex County League Premier Division tie.
The home side are well in contention for their league title with ten wins and one defeat in eleven games.
Likewise, Clapton are third in their table just four points below Shepherds Bush who are top. Their last game was eventful being a 4-6 victory over Camden United. They lost the 2019 final to Catholic United. 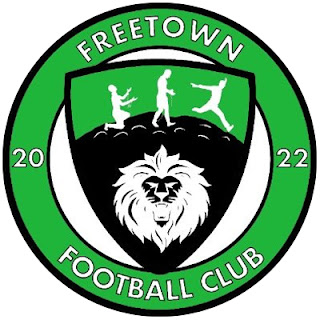 ESSEX ALLIANCE PREMIER DIVISION (EAST)
WALTHAM ABBEY 'A' v FREETOWN
I don't know much information on Freetown Football Club who are based in Highams Park - I can't find any social media accounts for the club who were formed this year and playing their first season in the Essex Alliance League Premier Division (East).
It's not been easy for them as they've so far lost 1-6, 0-7, 1-5, 1-6, 2-9, 1-11, 0-2, 0-2, 1-4 and last weekend were beaten 0-17 by Underscore United who have won all six of their league games so far.
The Abbott's 'A' team have won four and lost one of their five games played but have only hit the back of the net 9 times.
This game takes place at Townmead Leisure Park in the Essex Town.
at 13:00