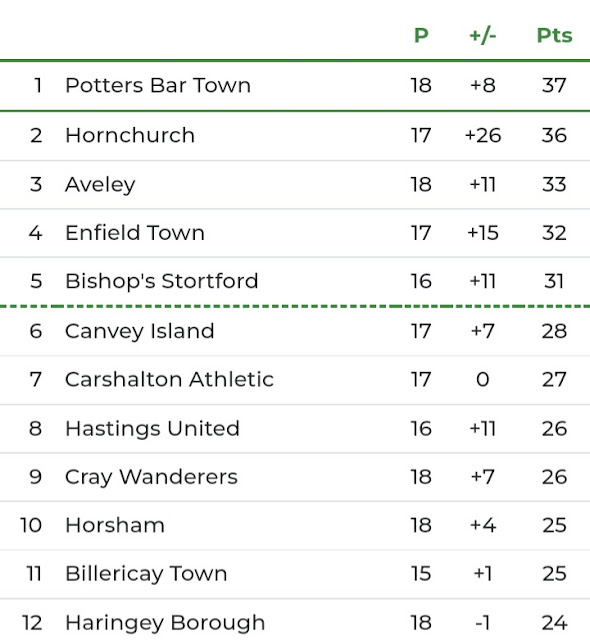 What could be a pivotal result at the top of the table occurred yesterday as Hornchurch won 2-5 at Potters Bar Town which saw The Urchins move within a point of The Scholars at the top of the table. Liam Nash, who had been on the bench for the Essex side in their last two league games, returned to the starting line-up and netted a hat-trick with Sam Higgins netting the other two goals - The former East Thurrock United and Chelmsford City striker has now scored 18 goals in just 13 league and cup games so far this season.

WILL THE TITLE WINNERS COME FROM THE CURRENT TOP FIVE OR WILL ANOTHER TEAM EMERGE FROM LOWER DOWN THE TABLE?

It's the first time since Saturday 29th January 2022 that The Scholars have conceded four or more goals in a game - they lost 0-7 at home to Folkestone Invicta on that day.

It's the second time this season Mark Stimson's side have scored 5 or more goals on their travels as they won 0-6 at Herne Bay earlier in the season.

The Urchins have scored the most goals in league games this season with a current total of 44 which is 9 more than the next best team Potters Bar Town currently on 35 - It's an even more impressive statistic when you see Hornchurch have played one less game.

Fourth placed Enfield Town have a very important month coming up as they host Bishop's Stortford next Saturday before travelling to Aveley on Friday 9th December. They then host Hornchurch on Sat 17th December before playing Potters Bar Town at home on Boxing Day. The Town have lost both their games against the current top five so far which both came away from home against Hornchurch and Potters Bar Town.

Enfield Town v Bishop's Stortford is the game of the day next weekend as they are the form sides in the last ten league games with both winning seven, drawing two and losing just one game.

There are just six points separating Potters Bar Town at the top of the table and Bishop's Stortford in fifth place so it's really looking likely to be a very exciting season - below the play-off places we have Canvey Island in sixth place on 28 points and only 8 points down to Folkestone Invicta in sixteenth place.

TOP FIVE v TOP FIVE TABLE
At the foot of the table, it's Corinthian-Casuals and Herne Bay who are currently in the bottom two followed closely by Brightlingsea Regent and Bowers & Pitsea with Wingate & Finchley just outside the drop zone. 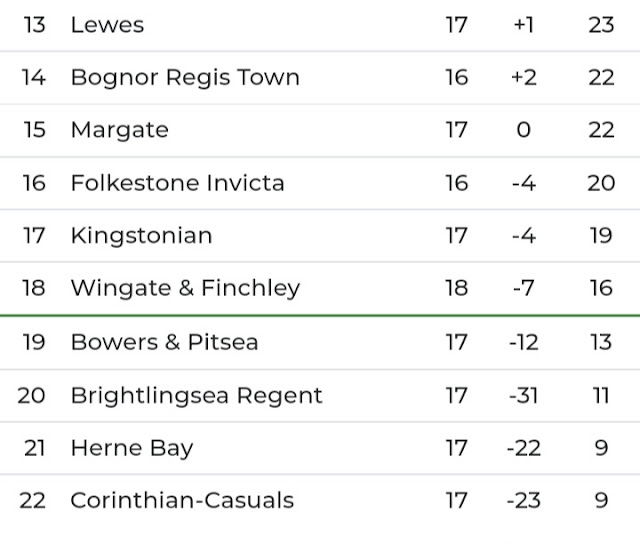