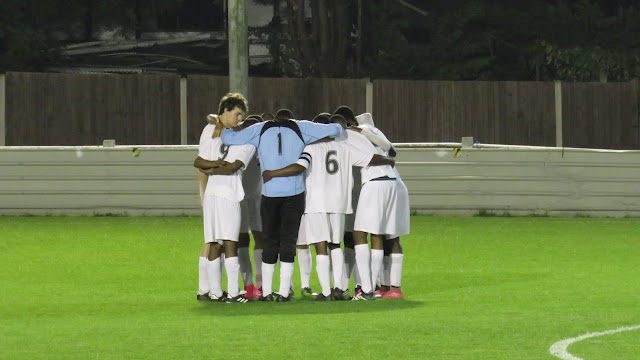 A NEW LOOK WADHAM TEAM GET TOGETHER BEFORE KICK OFF

It was East London derby time at Wadham Lodge last Wednesday evening as Clapton visited for a Gordon Brasted Memorial Trophy game. For the home club it had been a rather eventful few weeks prior to the game with new management and ownership taking over. The starting XI from their game the previous Wednesday evening (a 3-2 defeat to Sporting Bengal) had changed completely. There had been an influx of players for their game at Stansted on Saturday 23rd September which had seen them field a player in goal whom had never played in that position - they had competed well with a 0-0 scoreline at half time but eventually lost 8-0.

After that the last thing they would of needed would be to concede an early goal but unfortunately for them it was The Ton's who scored in the 4th minute via Andre Spencer and he added a second in the 37th minute. Most of the game was played in the pouring rain with the away side adding two more goals in the second half - the rain didn't help me filming the game as i missed those two - one where I was filming The Ultras singing! Wadham had a decent spell during the second half playing some good football but never really created any clear cut goal scoring opportunities. 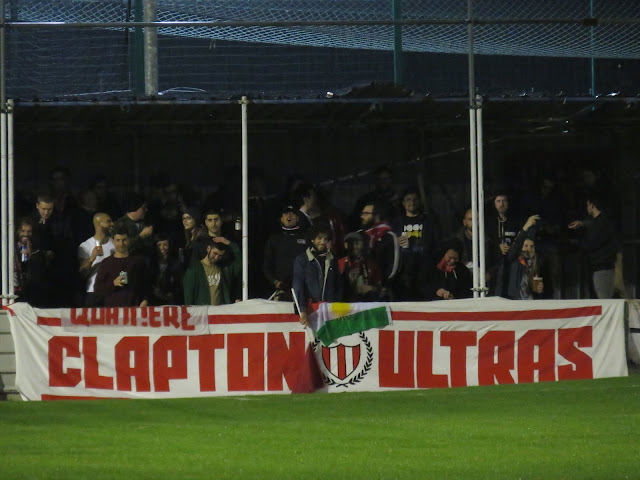 The game was watched by 133 people which was mainly of "The Clapton Ultras" who made some really good noise supporting their team throughout the 90 minutes and beyond. The celebratory sing song at the end of the game followed by handshakes all round was brilliant and another great example of the unique link between player and supporter at non-league level - it really is something that just can't be replicated further up the football pyramid.


It was more positive for Wadham Lodge yesterday as they won 1-0 at home to fellow struggler's Burnham Ramblers in front of a lesser crowd of just 14 people - their starting XI had another six changes included compared to Wednesday night's game.

The Ton's went to Takeley and lost 2-0. Takeley are now seven wins from seven games played in the league - Stuart Zanone was on the scoresheet again for the home side.