NOT MUCH GOAL-MOUTH ACTION AT OAKSIDE

It certainly wasn’t pretty and the cold end can confirm 100% that this was never a classic game in any shape but Redbridge boss Terry Spillane will be pleased The Motormen picked up the all important three points to keep his side in the play-off hunt after a 1-0 victory over Cheshunt on Tuesday night.

The Ambers were watched from the sparsely populated stands and terraces (just 55 people in attendance) by their new Manager Tony Faulkner whom recently left the Assistant Manager’s post at Wingate and Finchley to take over in the hot-seat at Theobalds Lane officially from today (Thursday).


Both sides played mostly long ball tactics defending well and in numbers.  The home side had that little bit more quality in the final third, despite Amber’s keeper Glenn Wilkinson not making any real saves of note, it was he who was the busiest impressively plucking lots of balls from the air after Redbridge crosses into the box.
Cheshunt had their best and only real chance of the game on 78 minutes when a close range shot was well saved by Redbridge keeper Joe Wright. It was only a minute later when the deadlock was broken by The Motormen via Shane Wyllie whom finished well past the unlucky Wilkinson

The Amber’s central defender Chris Sargent had a decent game getting in the way of things and doing his best to keep the score line goalless with Redbridge captain Glen Golby also standing out. The Cold End can only describe Golby as a good old fashioned centre back who is good in the air and strong in the tackle. 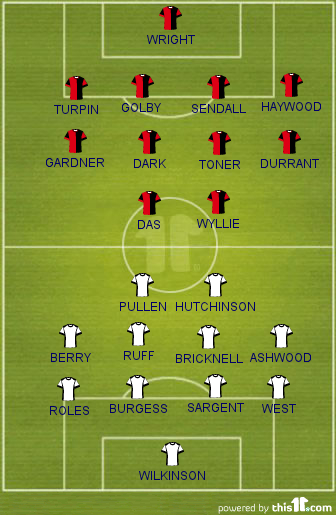