Goalkeeper Noel Imber was the hero for Enfield Town yesterday as he pulled off a number of excellent saves including one from the penalty spot against a very well organised Brentwood Town side who were unlucky not to get anything from the game.


Not that Enfield Town weren’t impressive as every player worked their socks off to get the all important three points. As well as Imber it was the back four of Lee Allen (making his first start since Tuesday 6th December), Mark Kirby, Dave Kendall and Jey Siva who all worked tremendously hard and put in sterling performances.
Imber’s penalty save came after Kendall was red-carded in the second half for tugging back Brentwood’s powerful and pacey centre forward Jose Espinoza when he was through on goal. I only just got the incident on camera but it looked like the right decision was made if you look at it from a neutral prospective.
Town’s 1-0 victory keeps them top of the league and although it wasn’t the champagne football the Town fans had witnessed at Romford last week the result will probably please Steve Newing more due to the determined nature of every player on the pitch. The substitutes Leon Osei, Craig McKay and Michael Ewang also played their part with Osei carrying out some much required skill and trickery to keep the ball in the corner away from the Brentwood goal towards the end of the game.

The Cold End has to say Brentwood Town were one of the best sides I’ve seen in the league this season and I expect to see them going for a play-off spot at the business end of the season.  What was good is that both sides played the game the right way passing the ball around and only going long-ball on rare occasions.

Tyler Campbell, who multi-switched from left to right midfield with Robbie Rees, impressed with the experience of Darren Blewitt at the back along with Elliott Justham in goal (who has recently had a trial at Championship side Reading) showing why Brentwood have the best defensive record in the league so far.

Ask the average man or woman on the street what do they think of when Brentwood is mentioned and a good percentage of people will probably mention some of the stars “The Only Way Is Essex” and the “The Sugar Hut” nightclub. Steve Witherspoon will be hoping The Blues will also put the Town on the map for footballing reasons over the next few months going towards the end of the season and the race for the play-offs.
One other talking point from the game came just before half time when Rudi Hall went in for a tackle on Ryan Doyle. With the much publicised tackles and subsequent issuing/non issuing of red cards in Manchester City’s televised FA Cup and League Cup of late it was interesting to see what the referee would do. Rudi’s studs were up but if you look at the replay it was only ever the ball he was going to win and although some of the Brentwood player’s thought it was two footed you can clearly see Rudi only goes in with one foot. A few years ago it would have been a perfectly timed and well executed tackle but these days you never know what will happen?? The referee issued Rudi with a booking. Have a look at the footage from 4mins and make your decision as to whether it was correct or not?
TEAM LINE UPS 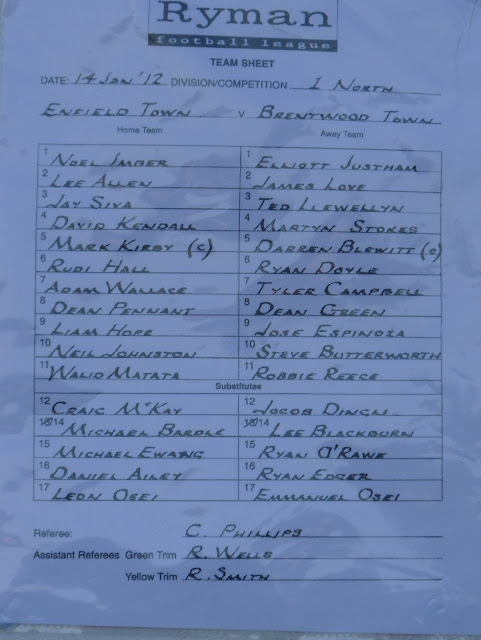 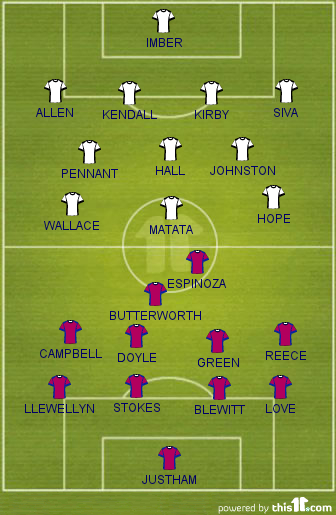