Sometimes with the beautiful game you’ll watch a goalless draw that will live long in the memory with chances a plenty, the woodwork hit several times and spectacular goal-line clearances. Unfortunately, for the crowd of 45 people who ventured out on a very chilly Hertfordshire Wednesday evening, the 0-0 draw between Wodson Park and Cockfosters wasn’t one of these occasions. 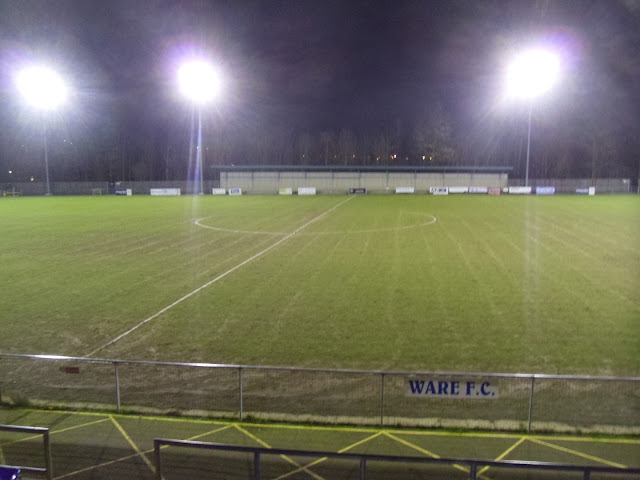 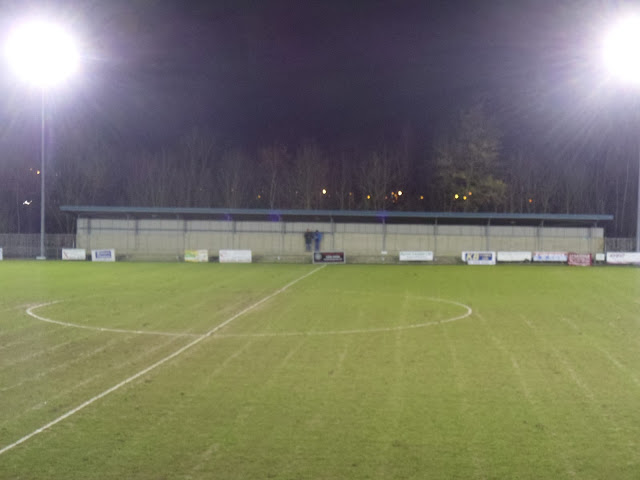 The condition of the pitch didn’t help matters as you can see by the pictures it’s not exactly conducive to free flowing passing football. Ryman League Division One (North) sides take note as forthcoming matches against Ware (who Wodson currently ground share with) will be effected by the playing surface. Ware host Potters Bar Town this Saturday followed by Needham Market on the following Saturday.  The Cold End wonders what the pitch will be like when Enfield Town visit Ware on Saturday 10th March!!

There were some highlights in the game. Cockfosters were marginally the better side in the first half with Lorenzo Ferrari on the left hand side (number 7) showing some pace and good skill. Ferrari would benefit from a better playing surface. They had one shot from outside of the penalty box go just wide of the post and a far post header from a corner which if kept down and on target would of troubled the Wodson keeper.

Both teams defended well by blocking shots and getting men behind the ball. Wodson had the best chance of the game in the second half when on the a shot from a cross on the edge of the 6 yard box was (I think...I still can’t tell after watching it back on video) very well saved by the ‘Foster’s keeper.

In the end the match finished all sqaure at 0-0 which for Wodson will be most welcome as in the return game at Chalk Lane played only a few months back on Tuesday 25th October the score ended 7-3 to Cockfosters!!