THE TOWN GIVE SUPPORTERS A FIVE GOAL CHRISTMAS PRESENT

If John Motson was commentating for Enfield Town’s third goal (from 4mins 49secs on the video) yesterday it would of gone something like this – KIRBY, HOPE, MATATA, JOHNSTON, HOPE, MATATA, PENNANT, SIVA, HALL, PENNANT, JOHNSTON, HALL, SIVA, KIRBY, JOHNSTON, HOPE....BRILLIANT! Although Liam’s skillful finish wasn’t a crisp strike past the goalkeeper (more Torres than Van Persie) the cold end is putting this up as one of the goal’s of the season so far. Particularly as I only caught the last 16 passes of the approximate 30 man passing move on camera!


It wasn’t just the third goal that was well worked as every one of Town’s five goals (aside from Liam’s first goal which was from a set-piece) involved lots of impressive passing from various members of the team who all put in a fantastic performance against Thamesmead Town.
Steve Newing had to re-shuffle his stating XI as Dave Kendall, Michael Ewang, Jon Moore and Leon Osei  were unavailable. Craig McKay, Neil Johnston, Rudi Hall and Walid Matata all started and it was the youngster Johnston’s performance in midfield that stood out as he had a hand in lots of Town’s good play. The Barnet Loanee was deservedly awarded man of the match.  Matata (with two well taken goals) and Wallace were full of running up front and Liam Hope was again impressive adding two more goals in his pursuit of Needham Market’s Sam Newson to win the Ryman North Golden Boot.
The back four also put in a good performance with Noel Imber not really having to make a save of any note during the 90 minutes. In their previous eighteen league games they had only failed to score recently against Tilbury, Needham Market and Heybridge Swifts on the opening day of the season.
Thamesmead Town set out with a 4-5-1/4-3-3 formation with centre forward Danny Penny holding the ball up supported by pacey wingers Chuck Duru and Theo Fairweather-Johnson who tracked back well when without the ball. Their midfield trio of Danny Moore, Scott Mullholland and Lea Dawson played close together with Moore being the more attacking of the three.  They were tough in the tackle with Moore and centre-back’s Lewis Tozer and James Donovan all booked in the first half as only Liam Hope’s goal separated the sides.
With the score delicately poised at 1-0 just after half-time the game changed when Moore was sent off for a second bookable offence after a challenge on Johnston.  This allowed the Town attackers more space to exploit and with four well taken and worked goals it was 5-0 with fifteen minutes left.  It wasn’t just because the visitors were reduced to ten men that it was such an emphatic score-line as take nothing away from Enfield Town as it was a highly impressive performance that even against eleven men would have been a comfortable victory.
Thamesmead are a good solid side (as Town know from out previous two defeats this season) so, for Town supporters, it was very pleasing to win with such style yesterday.
Mead’s young substitute Corey Walters-Wright (number 12) is due to travel up for a week’s trial with Premier League Stoke City soon. The Cold End wishes him all the best at The Britannia Stadium – It's great to see another non-league player getting a chance with the big boys and proof their is life outside the top echelons of the English game. 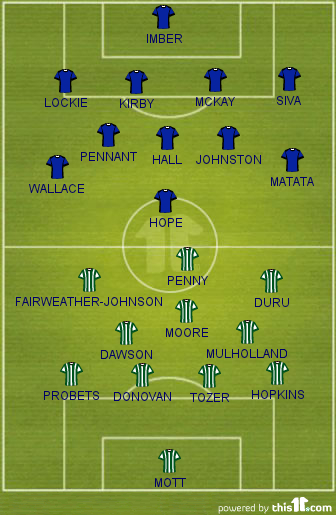