THE NIGHT IT RAINED GOALS AT THE SPOTTY!! 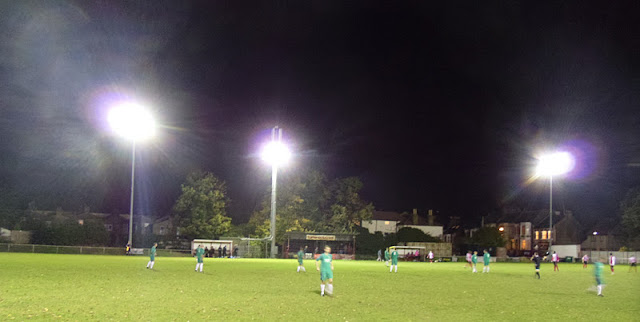 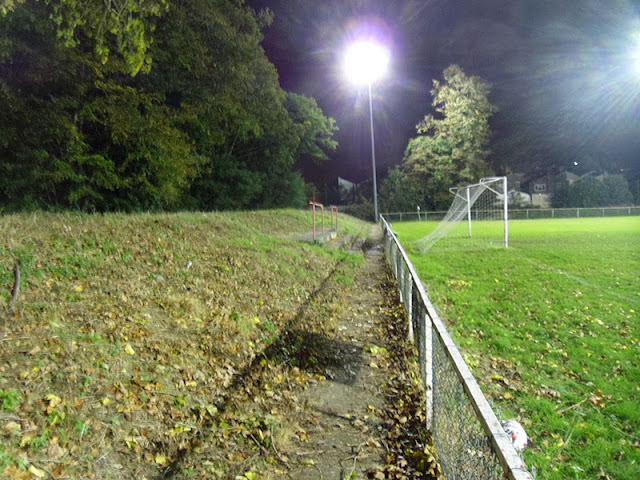 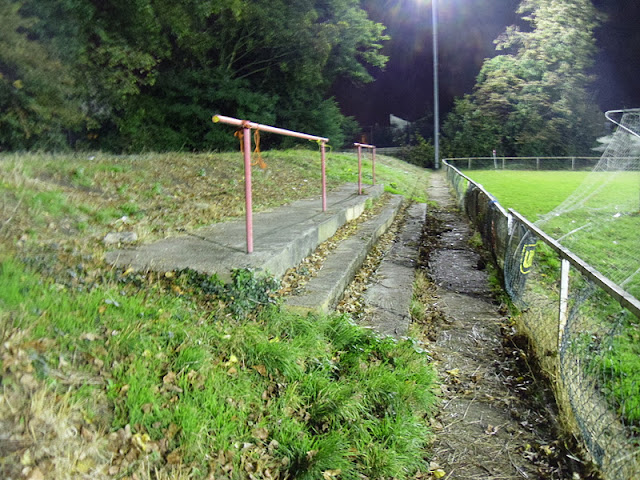 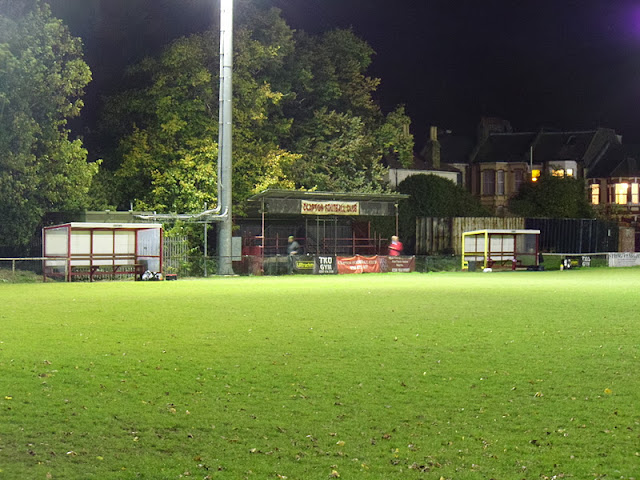 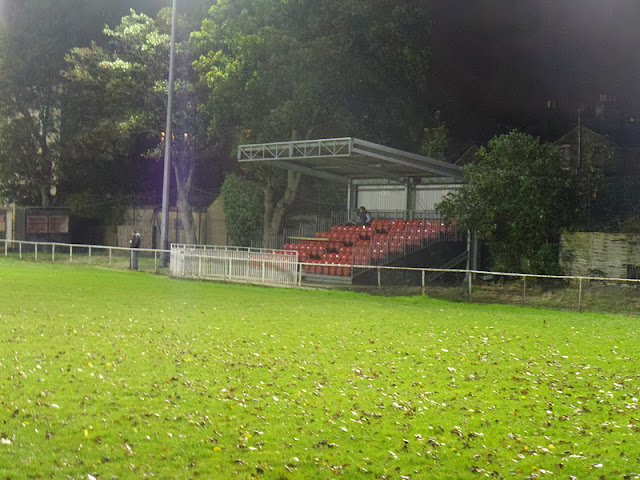 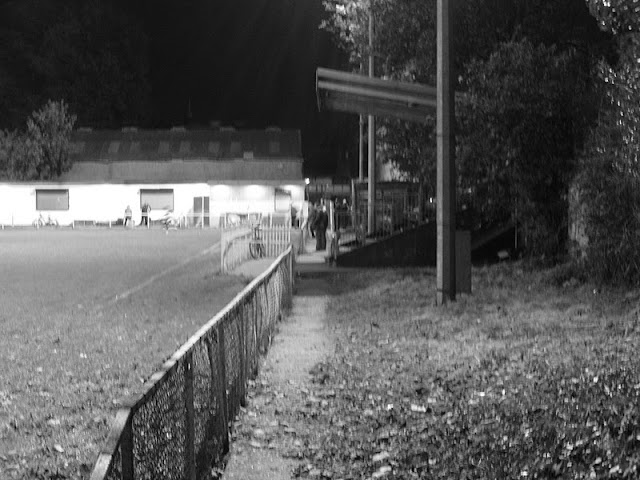 Two teams struggling towards the bottom of the Essex Senior League faced each other at the historic Old Spotted Dog Ground on Tuesday night. Clapton welcomed Sawbridgeworth Town to E7 with only one league win between the two sides in their combined total of 17 league games prior to this one. The Tons had scored only scored eight in ten games with Sawbo on seven goals in seven games so it's safe to say the 20 people in attendance who witnessed this game weren't expected goals..goals..goals!!  How wrong could we be??

Here are the match highlights of the game. Look out for Sawbo's number 17 who is George Wappett. I believe he has spent time at Bishops Stortford and looks a good player. For Enfield Town fans reading this he is in the mould of a Ben Hammond being a pacey winger/midfielder who can run with the ball, put a good cross in and has an eye for goal. The highlights are really worth watching for Clapton's second goal being a free-kick of some quality. From 5mins 45secs on the video, Lionel Messi would of been proud of this goal!!! -

Non league football is alive and well in Clapton. Entertainment and value for money are always guaranteed here. With the match kicking off three minutes early the home side were already three goals down as the last stragglers were coming through the gate!

Sawbo then went four ahead before the Ton's pulled one back. The match was played at a frenetic pace and all action stuff with Clapton back to 2-4 down was a comeback on the cards? Alas no, as two more from the away side made it 2-6 then a late third for my local team showed they hadn't given up.

One amusing moment during the match when Mr Leyton, Stephen Bellanoff went to retrieve the ball only to get tangled up in some netting left behind the goal and fell flat on his face, but he managed to wrangle free and get the ball, what a star.

With the main gate seemingly smashed to pieces I fear for the security of this ground and hope the locals do not vandalise the place as its still a location with bags of character, and always provides a real entertaining game of football. 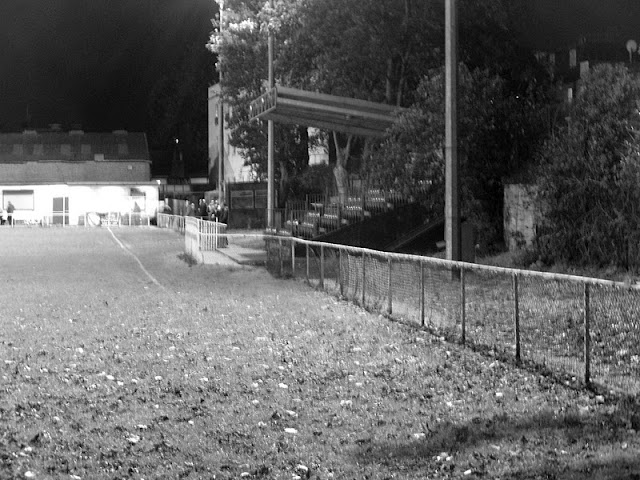 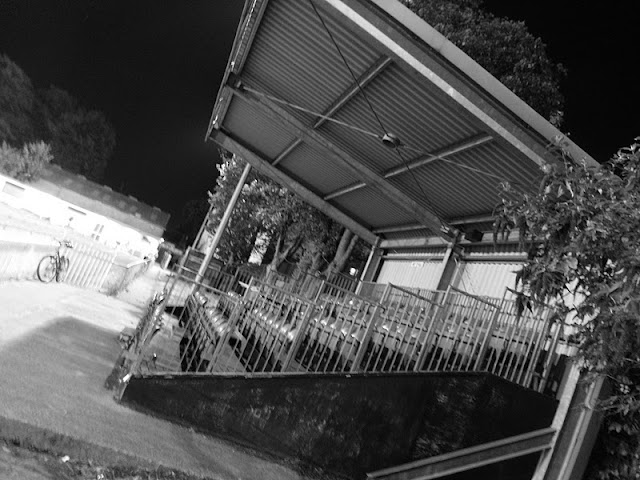 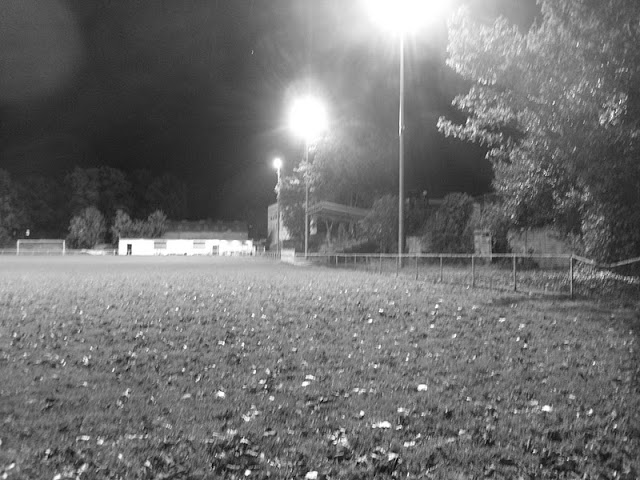 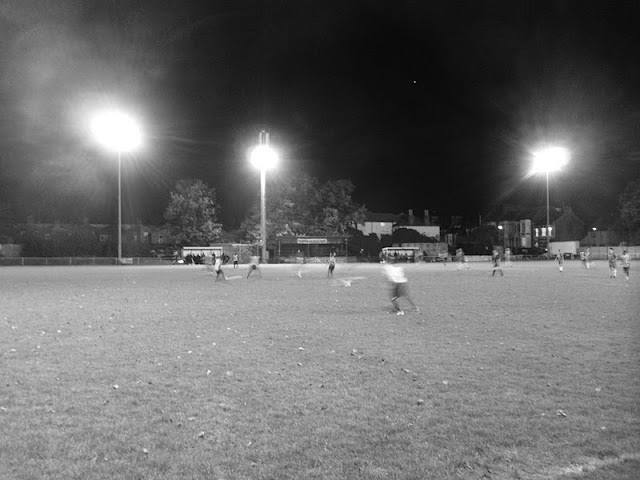 It's been a couple of years since I went to this grand old Duke of footballing history, hidden away on a bend. The pub next to the ground, the old Tudor building, has sadly been boarded up for many years and looks a sad sight, as does most of this 123 year old ground, though it's not as bad as some people make it out to be.

Going through the gates, a small admission booth is in front of you. To the right is the clubhouse and changing rooms building, with old furniture outside to sit on. This is quite spacious, with a large area for a ping pong table, a games machine, Sky on the box on the wall, and a sofa amongst some tables and chairs, though it does feel a little 'empty'.

The Ton's bar has nothing on pump, just a few alcoholic and non-alcoholic bottles/cans in fridges. The loos are in a bad state - the men's anyway, with just one available, as strangely the urinal is half missing (the 'important' bit), leaving a hole in the wall and a clear view outside (or inside...).

Starting from the entrance clockwise, is a typical 'generic' metal stand consisting of 100 fold-up seats, with a small wooden sill in front of one small row near the front of the stand. This is where the old South stand used to be. As one goes round, the perimeter fence which is overlooked by houses is in a state, and there's quite a lot of junk lying around in the overgrown undergrowth. The remnants of the old West stand still remain behind the far goal in front of a number of tall trees shedding their leaves, with a couple of concrete steps and a metal rail. Some of the hard standing around this area appears totally overgrown by grass or non-existent. The next side has wooden and metal fabricated dugouts, and in between a small corrugated covered and back-lined terrace, with wooden planking on a couple of levels and metal rails. Pitch side fencing is a metal rail with mesh wiring underneath, some rails broken in one corner.

Enough about Spotty for now, and onto the game. This was a battle between two strugglers, as many expected. Clapton seem to be making a habit of playing to avoid the wooden spoon in recent seasons, something they ended up with last season. Prior to the game only Haringey & Waltham Development were below the Ton's in the table. Sawbridgeworth were - along with Haringey - still without a league win this season, one place further up the table. However they have played less than anyone else, and have drawn four of those seven, including a decent point at in-form Sporting Bengal last Saturday, so a win here would not have been a surprise.

Typically, upon my arrival in the ninth minute, SawbridgeworthMessi style, not realising a Sawbo forward was right beside him to nick the ball off, and he easily slipped it away. A quarter of an hour gone, and the visitors were 4-0 up!

Funnily enough though, the Clapton forwards did look lively and had a bit of pace about them, causing a few problems, though too often they shot off target or got themselves offside, although the young official did make a few wrong calls on that front. However Sawbo were always dangerous on the break against the abysmal back line, and looked like they could score every time they went forward. Indeed on 36 minutes only the legs of the Ton's keeper stopped a fifth when a player broke clear. Clapton did have their chances though, and moments later one of their guys was through, but
Sawbridgeworth's keeper stood up well and blocked the effort. On 40 minutes though they did give themselves a faintest of glimmers of hope, when a strike from the edge of the box ended up in the net. They then missed a glorious chance to halve the arrears, when a ball from the left was shot horribly wide from close range by an unmarked fella, and they also let another opportunity slip before the half time whistle, but not before a Sawbo player sprinted clear again after another defensive error, but he lifted the ball over the keeper, not keeping it down.

If the first half seemed so open, it was nothing quite like the second! The visitors started off the best with a shot just wide and a header from a corner badly over. They were then nearly gifted a fifth, when under pressure, a Clapton player slipped the ball past his own keeper from the edge of the box, but luckily for him it went wide. A great opportunity for the home side on 54 minutes when a forward turned inside the box but his close range shot was wildly off target. Shortly afterwards a Sawbo player got clear down the left, the Clapton keeper half saved the shot in the box, but it squirmed across the goaline, though a few onrushing Sawbo players were a bit slow to react at the far post to net an open goal, probably thinking it was going in, and the chance to kill the game went. They were nearly punished moments later when the ball fell to a Clapton player in the box, but he got the ball stuck under his feet and the chance went. However on 61 minutes, a Clapton free kick near the right corner of the box was fired into the top corner, and it was game on all of a sudden!

The Ton's kept pressing, and could have pulled it back to 3-4 when a player's shot on the edge of box in a good position was too weak to worry the goalie, who then did well to just beat a player to a ball forward. Another goal though for the Hertfordshire side would surely kill off any fightback, and it came on 71 minutes from about the only bit of quality all night, when a player saw the Clapton keeper off his line, and from 25 yards dinked it over him in the blink of an eye. A quality finish. Back came Clapton, and a good 25 yard shot from a player just went wide. That was a brief interruption though, as on 77 minutes a ball forward was just met by the striker before the advancing goalie, and tucked away to put the visitors a remarkable 6-2 up. The game continued to be open and full of chances, and with eight minutes left, the goalscoring wasn't over, as Clapton got another goal on the night, with a striker tucking away a ball from the right from close range. The Ton's pushed late on for at least another goal, coming close a few times, including a deflected shot just wide, but Sawbo nearly got them on the break again. In the end we just had to settle for nine goals.

An incredible game, so open, and though not great on quality, was full of entertainment. Even though his side won 6-3 I don't think the Sawbridgeworth manager seemed too happy with the quality of his side's football. At least for them they are up and running. Both sides seem to have the same problems - hopeless at the back, but going forwards they have players that will cause sides problems. Clapton could still amazingly have got something from this game, but they wasted so many chances of their own, while Sawbo often punished the many defensive mistakes of the home team. I wouldn't be surprised on this showing if Clapton finish bottom again, though they are a young side and will only get better. Some fans or friends of players were refreshingly upbeat despite the scoreline, offering encouragement to their side. Nice to see people not on their backs, though sadly there are so few spectators these days at the Old Spotted Dog. 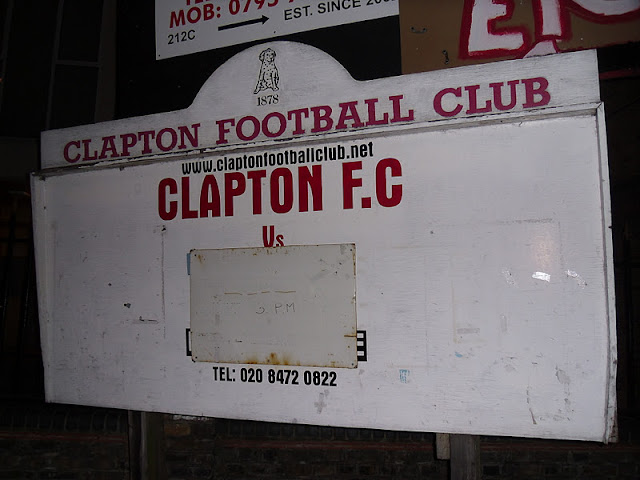 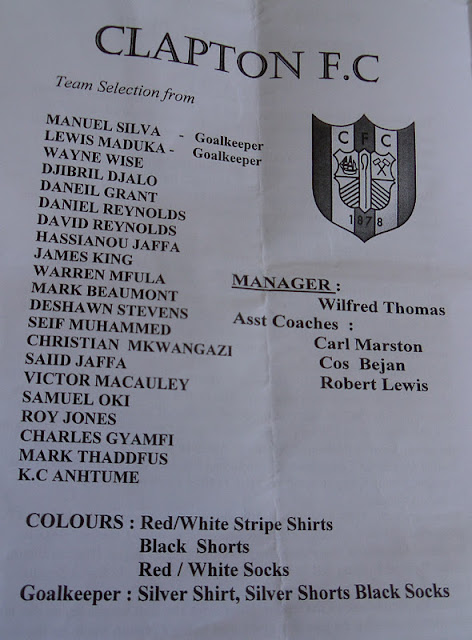 Clapton's average crowd for all their home league and cup games this season is just 22. The cold end recommends that people pay a visit to The Spotty as it's well worth it. The Tons forthcoming home fixtures shows them playing Bowers and Pitsea on the 5th November and Enfield 1893 on the 26th November.
at 12:35