LAST GASP HADLEY THROUGH AGAINST WINSLOW 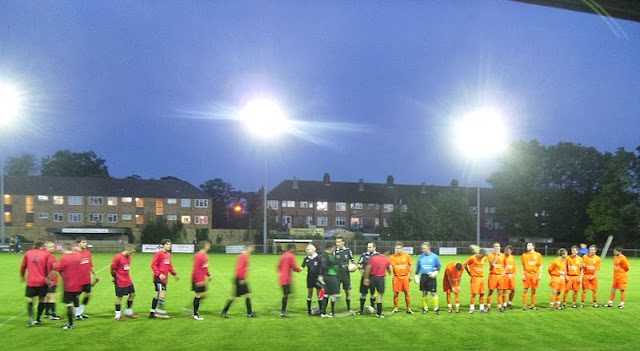 The final of the games in Round 1 of the Spartan South Midlands Challenge Trophy were played this midweek with the cold end travelling to Potters Bar Town's South Mimms Travel Stadium where Premier Division (step 5 of the non-league pyramid) Hadley currently play their games. Their visitors were Division Two (step 7) Winslow United who had beaten Hellenic Premier Division (step 5) Holyport FC in the FA Vase the previous weekend and were looking to cause another shock.
Just thirty-five people saw a game which improved in the second half with the only real goalmouth action in the first half being Hadley's goal.

The second half saw the home side try and add to their lead against a Winslow side who were apparently missing a large number of first team players. The home side hit the post, the bar and also had a good effort cleared off the line as the visitors worked hard to stay in the game without ever troubling the Hadley backline.

With just a few minutes left Winslow were awarded a free kick on the right hand side which was whipped into the box and after a short scramble in front of the keeper they made it 1-1. It looked as though the game would be extended with extra time on the cards only for Hadley to score almost immediately with a well taken shot from outside of the box from Darren Turner who showed some good touches throughout the game.

In the end on chances created this was a fair result between two hard working sides. Winslow can be proud that they stayed in the game for so long with so many players missing from their side.

The first round has now been completed aside from one game being Caddington v Crawley Green which will be played on Saturday 17th September. A full list of results can be found on

At present there are two Division Two sides left in the competition who both face tough trips to Premier Division sides in Round Two. Bletchley Town visit Royston Town and Risborough Rangers go to Aylesbury United with the games due to be played on the 18th and 19th of October. If Caddington are successful against Crawley Green they will make it three Division Two sides with a home game against Premier Division Holmer Green.

Hadley travel to Hertford Town in Round Two.
MATCH HIGLIGHTS ARE BELOW (INCLUDING ALL THREE GOALS)