"BRIDGE OVER THE RIVER MOLE" TO THE RYMAN PREMIER

For Dulwich Hamlet and Leatherhead this was billed as one of the most important match in over two decades of football. It was a chance for promotion to the Ryman Premier Division.

The Tanners, as Leatherhead are known, last played in that division (albeit at the time a step 2 league, it now being step 3) in the 1982/83 season when they were relegated after finishing bottom of the table conceding 121 goals over 42 league games. They have since spent their time in the lower divisions of the Isthmian League with one promotion in 1997 when they finished runners up behind Collier Row & Romford in Division Two. Last season they qualified for the play-offs but went out on penalty kicks in the semi-final against Folkestone Invicta (who had finished in second place to Leatherhead's fifth)... this season they ended up in fourth place and again travelled to the South coast where they banished last season's penalty heartache by beating Brighton based Whitehawk on spot kicks.


Dulwich Hamlet have been out of the Isthmian League top flight since relegation in 2001.The club has a thriving youth section having qualified for the Third Round proper of the FA Youth Cup this season where Newcastle United ran out 2-6 winners on a memorable night at Champion Hill. Two young players from that side have since signed for professional clubs with Quade Taylor joining Crystal Palace and Paul McCallum joining West Ham United.
Hamlet had won through to Saturday afternoon's match by winning 1-2 at Bognor Regis Town who had finished as runners-up in the league table on a difference of one goal. Thirty one points had separated the two sides in 2nd and 5th place. Some people may argue the play-offs are unfair but the cold end is a massive fan as it creates an end of season excitement and interest for everyone. In fact Hamlet had been well out of the play-off picture going into the last twelve matches in the season and it was only their brilliant run of results that allowed them to sneak into 5th place. Leatherhead, on the other hand, had been top for part of the season and dropped down into the play-off places in the last 20 league games.


As all football fans knows form goes out of the window for these one off games and what happened on Saturday afternoon will be remembered by both sets of supporters for a long time to come. Neither side deserved to lose what was a fantastic game that went to extra time. If you were a Dulwich or Leatherhead fan you certainly went through a roller coaster of emotions in the 120 minutes that was played out in front of a crowd of 1,022. The cold end won't go into too much (scroll down for more about the result and more photos) in case someone reading this doesn't know the score - just sit back and watch the highlights (including all of the seven goals that were scored) of a game that was a tremendous advert for Ryman League football.

Dulwich Hamlet were the best side for mostly all of the 90 minutes of regular play with their pace and good passing going forward causing all sorts of problems for the Leatherhead back line. Being 1-3 up with only 10 minutes of ordinary time left it was looking like Hamlet were destined for promotion and even when Leatherhead got one back on 83 minutes it still looked like the South Londoner's were going to win. 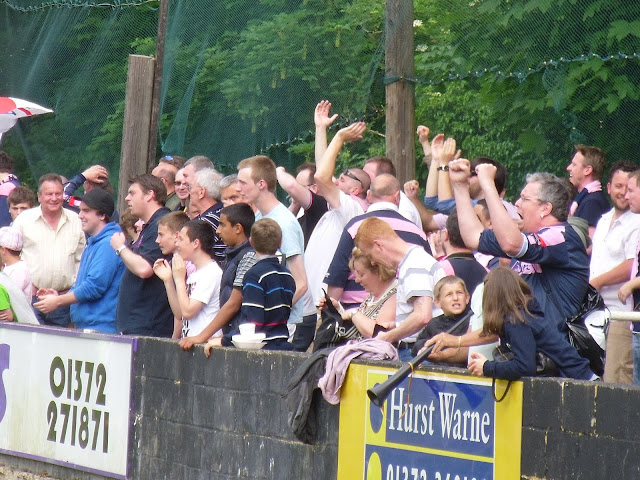 An incredible 9 (nine) minutes of added time came due mainly to two injuries that caused long stoppages. Leathehead scored to make it 3-3 and the game headed into extra-time. The sight of Leatherhead fans celebrating whilst some of the Dulwich player's lay on the floor obviously absolutely gutted that they had been so close to the win encapsulated the roller coaster of emotions everyone connected to both clubs had on the day. The home side never gave up and the spirit they showed to pull themselves back into the game has to be admired.

Massive credit goes to Dulwich Hamlet as they didn't give up and in the second period of 15 minutes extra-time had two good chances to make it 4-4 taking the game to penalty kicks. The post and Leatherhead's goal-keeper Chico Ramos came to the home side's rescue.

The final whistle saw a friendly pitch invasion by The Tanner's fans who mobbed their team and will be playing in the Ryman Premier Division next season alongside Wingate and Finchley who won the Division One Play Off final by a scoreline of 3-2 AET.

Here is where the spirit of non-league football was shown as a group of Leatherhead fan's went right over to the Hamlet fan's in the covered end behind the goal and applauded them and their team for their efforts. Hamlet fans sung "we'll support you evermore" - with their exciting young players and the management duo of Gavin Rose and Junior Kadi the cold end is sure Champion Hill will see more good football next season.


Some people knock the play-offs but yesterday's games across the Ryman Divisons surely show that they are a good thing. In the Ryman Premier Division Tonbridge Angels were 3-1 up at half time against Lowestoft Town in front of 2,411 but The Trawlerboy's levelled it at 3-3 on 75 minutes only the for Angels to score in the 78th and what sounds a brilliant game finished 4-3. Including Wingate's 3-2 victory over Brentwood that's 19 goals over three games!!

Dulwich Hamlet are one of only four clubs (occured five times) to score three goals against Leatherhead at Fetcham Grove this season in 31 games. League games versus Ramsgate 3-3 (28/09), Eastbourne Town 7-3 (11/12) go along with Hamlet's 1-5 Championship Manager Cup Semi-Final on the 8th March and Enfield Town's 1-3 FA Trophy victory on the 2nd October. 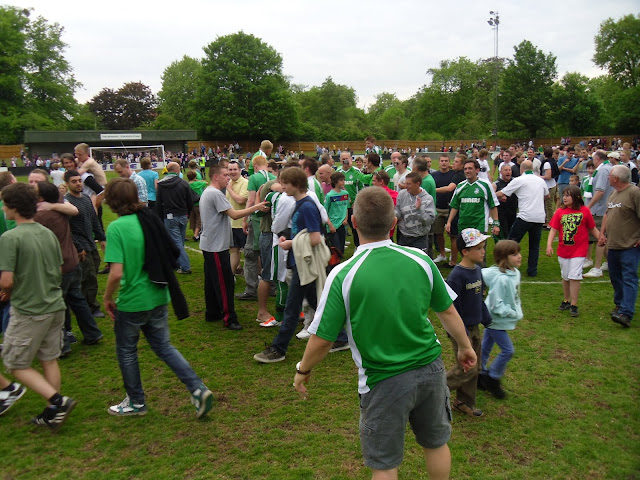