BLUE BOYS THROUGH AT EXPENSE OF THE CORINTHIANS 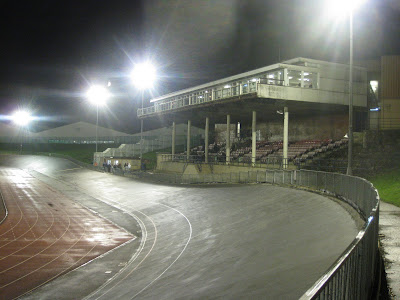 Above - the main stand at Gosling Park. A crowd of 86 people saw the game, the top attendance of the night in the SSMFL Trophy.

Premier Division side Hatfield Town comfortably saw off the challenge of Division Two Tring Corinthians in the Spartan South Midlands League Trophy tonight at the Gosling Sports Park. In a scrappy game the home side looked the more composed on the ball and despite going down to ten men midway through the first half they never looked in any danger of losing. After a forgetful 45 minutes the score stood at 1-0 with Corinthians only worthy effort being a shot from the edge of the box which went wide of the target.
In the second half visitors came back into the game but a quick two goal burst by the blue boys finished the game off. Tring, for all their hard work and effort, got a late consolation goal towards the end of the game. Matthew Standen was man of the match netting all three goals for Hatfield Town.
FINAL SCORE - HATFIELD TOWN 3 TRING CORINTHIANS 1

See the highlights of the game below -

Here are the results from the other games played tonight with some surprise results coming with Premier Division Hillingdon Borough, Harefield United and Kingsbury London Tigers all being knocked out by lower division sides. The game of the night (and possibly the season) came at Gaywood Park where it rained goals as Premier Division side Holmer Green won 7-6 against First Division Kings Langley.