ALL SQUARE AT TOP FIELD 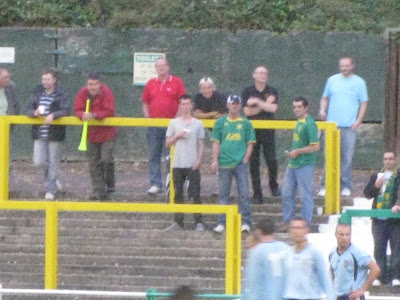 Above - The Vuvuzela making an early season appearance on the terraces at Top Field.

The cold end visited Top Field, Hitchin tonight to see Ryman Premier League Hendon take on their Zamaretto Central Division hosts in a pre season friendly.
The Vuvuzela ban that has been imposed by several Premier League sides in not yet in effect in Hertfordshire - one enterprisnig Hitchin supporter amongst the crowd of 141 had brought one along to add to the atmosphere.
The first half was one where goal-mouth action was at a premium with a Hendon shot from the half-way line which went way wide of the target and a Hitchin header over the bar from a right hand side free kick the only efforts worthy of note prior to a the visitors getting a good shot on goal just prior to the break which was saved by the Hitchin keeper and then headed clear by a defender.
Hendon's back four retained the ball well and with confidence throughout the first 45 minutes but when going any further downfield it never really worked for them prior to the break.
As is tradition with pre season games several substitutions were made a half time and it seemed to do the trick for Gary McCann's side as they looked much better going forward. Substitute Aaron Morgan who was playing as trialist, having played against Hendon for Hillingdon Borough last week, looked good with his pace and strength creating several of their chances.
Both sides had a few chances with Hendon nearly breaking the dead lock when Lubo Guentchev cut in from the left hand side with his shot being comfortably but well saved by the Hitchin keeper.
The Canaries nearly won the game in the dying moments when a Hendon player put the ball across the box for a Hitchin player to pick up the ball and put a deflected shot in on goal (the defender done well to get in the way of the shot as you will see from the match highlights) which was saved by James Reading who had replaced Berkley Laurencin at half time.
FINAL SCORE : 0-0
HITCHIN TOWN STARTING LINE UP
Matin Bennett, Tony Fontenelle, Tom Pepper, Dean Gilbert, John Worsworth, Carl Williams, Ieuan Lewis, Louis Lee, Jamie Arlick, Bradley Harrison, Zak Burke.
Subs (of whom many came on) - Richard Howell, Ryan Haggerty, Tom Mustapha, Alex Copping, Aidan Byfield.
HENDON STARTING LINE UP
Berkley Laurencin, Eddie Manully, Danny Dyer, Casey Macleran, James Parker, James Burgess, Lubo Guentchev, James Busby, Aaron Lansiquot, Glenn Garner, Kevin Maclaren.
Subs (of whom many came on) - Craig Vargas, Jon-Jo Bates, Dave Reading, Aaron Morgan, Fabian Sims, Matt O'Brien, Mariuz Serwin, James Reading.
MATCH HIGHLIGHTS -
at 23:58