ANOTHER FOUR GOALS IN VICTORY AGAINST A CHESHUNT SIDE LACKING CONFIDENCE 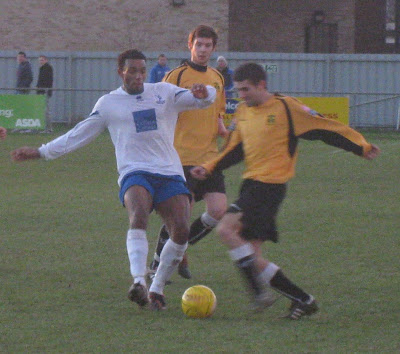 The sparsely populated stands at the DW Stadium where only 5,335 turned up to watch the FA Cup tie between Premier League sides Wigan Athletic and Hull City wasn't the only place in football where you could see wide open spaces this afternoon. Cheshunt's defence was decidedly leaky with too many gaps appearing for the home player's to expose.

The cold end was running late in company of his cousin who had made the trip up from Portsmouth to see some proper football so missed Jordan Lockie's opener in the 3rd minute. As we walked across from the car park we heard the cheer...to which my Pompey relative replied "Sorry...I've made you miss the first goal"....I replied "First goal, now there's confidence" 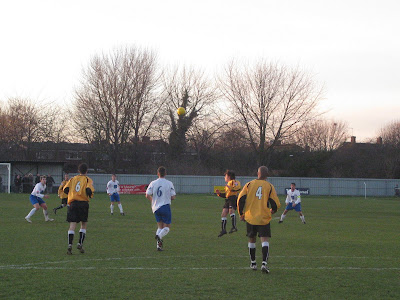 All the talk before the match if the pitch was going to be playable following the sharp overnight frost and chilly conditions in the North London area was unfounded as the pitch looked in very good condition which the ground-staff at Goldsdown Road must be congratulated for.

A friend of the cold end when asked about what was Lockie's opener stated that it was a 40 yard screamer..probably the goal of the century. It was apparently a great goal from a bullet of a shot but I'm not sure if it was 40 yards out....I'll never know!! Anyway we were 1-0 up and looking good. Lockie deserved the goal for all the time he has sat on the bench as substitute in the last few months being a real team player.

Above - Mark Kirby's header is well saved by Cheshunt keeper Dodd. Kirby is surrounded by Two other Town player's and no Cheshunt defenders anywhere to be seen indicating how poor the away side were today.
Rob Blackburne was a virtual spectator during the first half but when called into action from a Chris Meikle shot he saved well. The Amber's were unadventurous in going forward and looked like a team low on confidence who have only won one game in their last six.

Town went 2-0 up when Mark Kirby knocked the ball into the net from close range after the ball pinged around the inside of the box. Sam Byfield having another good game for Town found himself through on goal to make it 3-0 but unfortunately dragged his shot wide of the post with only Amber's keeper Luke Dodd to beat.

Town made it 3-0 when Sam Byfield scored with a curled shot just inside the box following good work from Liam Hope to lay the ball off to him.

Sam Byfield then returned the favour for Hope when his free-kick from the right hand side was headed by Kirby for Hope to head home to make it 4-0. Hope has now scored 9 goals in 13 games for Town which is a great return, He is yet another great signing made by Steve and Del. 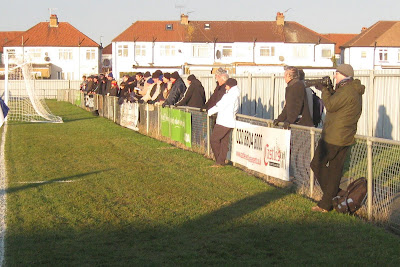 Above - Town fans gathered at the cold end today.

Paul Marks who looked busy all day in the centre of midfield then found himself one-on-one with Dodd but also dragged his shot wide of the mark like Byfield had done in the first half. Liam Hope could of made it a five-star performance when his looping header looking like it was dropping into the net but hit the bar at the last minute...Very unlucky!!

With the game at 4-0 and won a raft of substitutions by both sides saw the game peter out to a finish.

Another good team performance with four goals form four separate players against a very poor Amber's side who look like they are in for a battle at the wrong end of the table in the second half of the season. They had two attempts on target with two or three other shots off target which never troubled Rob in the Town goal.

One other plus from the game was that Steve & Del dodged the dreaded Manager of the Month award curse where team's loose the next game played. Lets hope the duo go on to get the award for January 2010 as well.

THE COLD END MAN OF THE MATCH - SAM BYFIELD for his goal and all round play closely followed by PAUL MARKS who looked busy in midfield.

Att - 246. Town's 2nd best of the season after the Lowestoft Game.
The cold end was also very pleased to see the return of the brilliant Enfield FC/Enfield Town FC supporters fanzine/magazine Talk of the Town End today. £2 very well spent on an excellent publication!!
at 20:36