TIGERS BEAT THE MAGPIES AFTER EXTRA TIME AND PENALTY KICKS 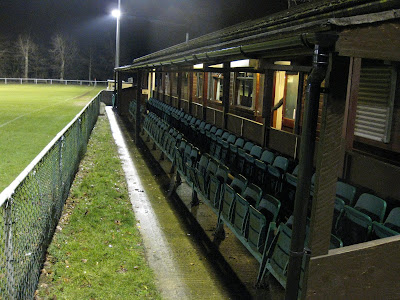 THE MAIN STAND AREA AT THE RECREATION GROUND 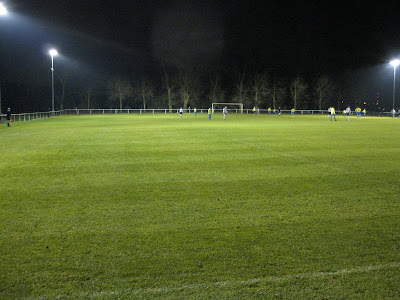 THE PITCH LOOKING IN GREAT CONDITION

A match of contrasting styles at the recreation ground where the more direct hard working home side played the skillful passing Tigers. Bearing in mind all the snow that had melted over the weekend the pitch was in very good condition for January and it was nice to see a match being played after all the postponements of late.

There was cold wind blowing across the pitch as Tiger's skillful passing play saw them have the best of the opening exchanges with a Colney player heading the ball off the line. 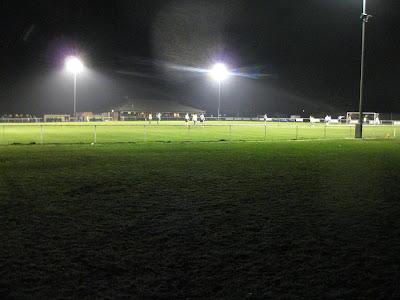 It was a half of few chances for the 42 hardy souls who had turned up and it was somewhat against the run of play when Kevin Ashwood put the home side 1-0 up firing home from about 5 yards out.

Edson Cata in the centre of midfield drifting up front for the tigers looked very impressive but the away side couldn't fashion a chance to make it 1-1 allowing Colney Heath to get back into the match. Amodou Gerber in the centre of defence for the home side also impressed with a good confident performance. 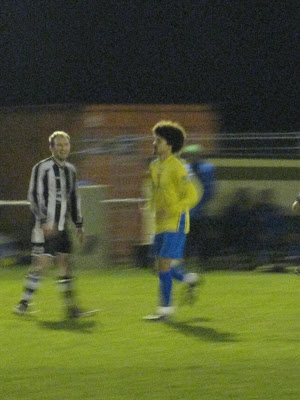 The game changed when the tiger's brought on the brilliantly named Kye Hendrix who also sported a Marouane Fellaini hairstyle who seemed to be the player up front Tigers were looking for in playing the big target man up front role. Still Kingsbury didn't really create any good chances until the 90th minute when Elton Almieda let fly from the edge of the box with a great shot which flew past Tom Blackman in the home goal to the delight of the few loyal Tiger officials and supporters who had made the trip up A1. A fantastic goal which on the balance of play was richly deserved.

One of the Colney players then asked referee Mr Trinder if there was extra time??... Mr Trinder replied "Yes" with the player looking disappointed he would have to run about for 30 minutes more. 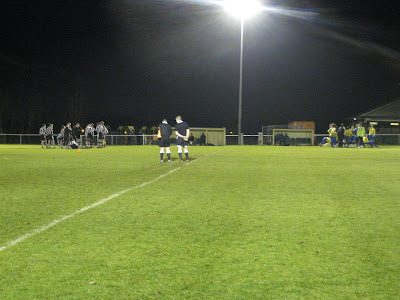 The temperature had dropped during the game and the wind that was blowing across the field was making it more freezing. Lucky I remembered my gloves this time! The crowd certainly wasn't 42 for the extra-time period with some people disappearing into the bar to watch the Manchester derby in the warm.

The extra-time period was played out with a few half chances and Axinte Valentin in the tiger goal pulling off a great save from a shot from the left hand outside the box. Colney had a shout for a penalty late on with what appeared to be a push in the box but Mr Trinder had a good view and waived play on then blowing the whistle a short while later ruling the match should be decided by penalty kicks. 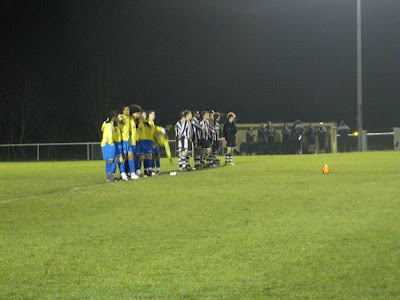 THE PLAYERS LOOK ON AT THE PENALTIES

The first three penalty kicks were scored by both teams with Colney taking the first. Colney's third kick was initially saved by Valentin only for the referee to order a retake for the Tiger keeping coming off his line too quick. Colney's fourth kick was blazed over the bar ala Chris Waddle 1990 with Kye Hendrix missing his side's fourth kick twice as the referee ordered another re-take this time for the away side. So, With four kicks taken it was all to play for at 3-3.
Colney's fifth kick put to the right hand side only to rebound back off the post making Kingsbury's fifth penalty a winner if it was scored. The Kingsbury player did blasting the ball high and to the keeper's right to send his side through to the semi-finals.


KINGSBURY RUN AND SHOT ON GOAL


GREAT SAVE FROM AXINTE VALENTIN


HEATH'S FIFTH PENALTY KICK COMES BACK OFF THE POST